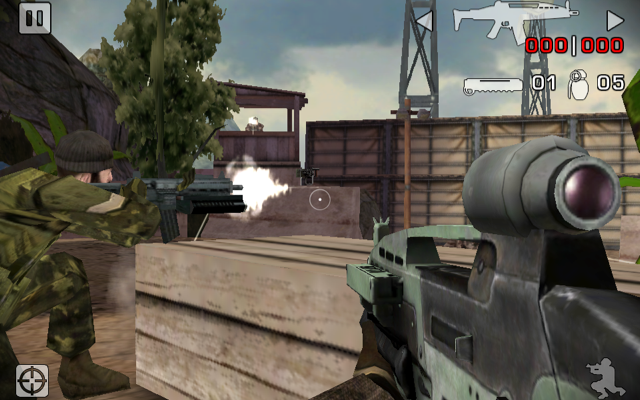 Bad Company 2 is a competent mobile shooter that hits a few stumbling blocks along the way.

Offering a 14 mission single player campaign and a fun but flawed multiplayer component, Bad Company 2 is a competent mobile shooter that hits a few stumbling blocks along the way.

Rather than offering on-screen buttons and joysticks like a typical shooter, the default control scheme here lets players control their movement by dragging their finger anywhere on the left side of the screen and their camera by dragging anywhere on the right. It’s a great layout in theory, but the inclusion of other commands and buttons can make things a relatively messy affair. Shooting, for example, is achieved by tapping on the right side of the screen – but since the right side also controls your camera, it can be all too easy to accidentally fire off a round and alert the enemy to your presence when all you’re trying to do is turn your head to the left. 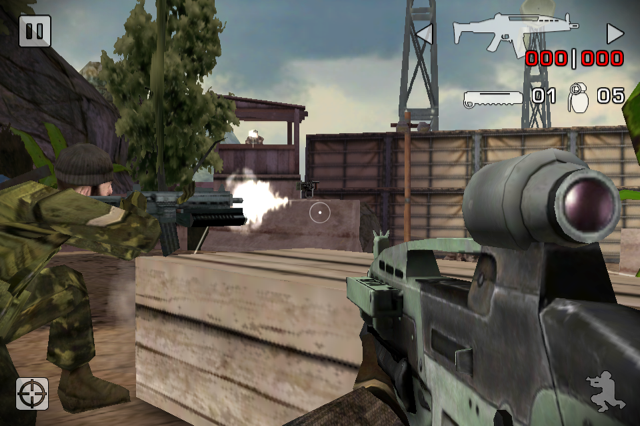 Equally frustrating is the speed control; rather than moving at a single speed, you’ll be able to walk or run depending on how far you swipe as you initiate movement. There’s never any reason to use the walk speed, and yet time and time again we found ourselves plodding along at a snail’s pace purely by accident. And since the run speed feels kind of slow anyways, walking is downright painful. Combine that with zoom and crouch controls in the bottom corners, easily swiped accidentally when controlling movement or aim, and you’ve got a recipe for frustration.

Still – the gameplay isn’t as awful as we’re making it sound. All of the above, while unavoidable with the default control scheme, are merely minor annoyances at best. Once you get used to the controls (and the occasional problems you’ll encounter as a result), Bad Company 2 manages to be a fairly enjoyable offering. And it should also be noted that while the controls we have gripes about are the default, they’re not your only option. You can switch on a d-pad and fire button combo reminiscent of other iPhone shooter games (although the selection to do this is hidden away in the pause menu) and you’ll likely find this greatly cuts down on the annoyance factor.

The single player missions manage to break things up fairly well, presenting players with different objectives in every mission. The vehicle-based sections are a bit of a hassle (the game’s controls are at their worst here), but having to switch from huge firefights to stealthy knife kills to wild moments like painting tanks for air strikes manages to keep the experience feeling fresh and fun throughout. 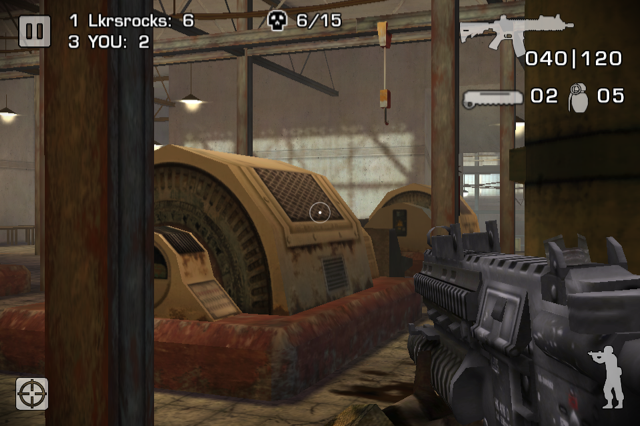 Single player campaigns may be nice, but as any first person shooter fan will tell you the heart of these games is in their multiplayer. Sadly, this seems to be the place where Bad Company 2 stumbles largest. The multiplayer lobby system is a complete mess. There’s no “auto-join” option to let players easily jump into the action, and games tend to fill up faster than you can select them and click join. The vast majority of our attempts to jump into somebody else’s game were met with an error message, and even when we did get into a game, we couldn’t help but notice how stripped down the experience was when compared to the competition.

While games like Modern Combat 2: Black Pegasus and N.O.V.A. 2 offer 10-player online competition, a variety of modes, and XP progression, Bad Company 2‘s multiplayer is so limited that it ends up feeling like a demo more than a full on release. Online play is limited to four players, two maps, and two modes – deathmatch and team deathmatch. The maps themselves are well designed and the gameplay is quite enjoyable and seemingly lag-free, but it’s impossible to ignore how limited an offering this is.

Battlefield: Bad Company 2 is a competent first person shooter for the iPhone, but it’s far from the best of the best. If you’re already hooked on mobile FPS’s Bad Company 2 won’t blow you away, but it should still make a worthy addition to your collection. If this is your first time with a portable shooter, though, we suggest you take a crack at Modern Combat 2 instead.