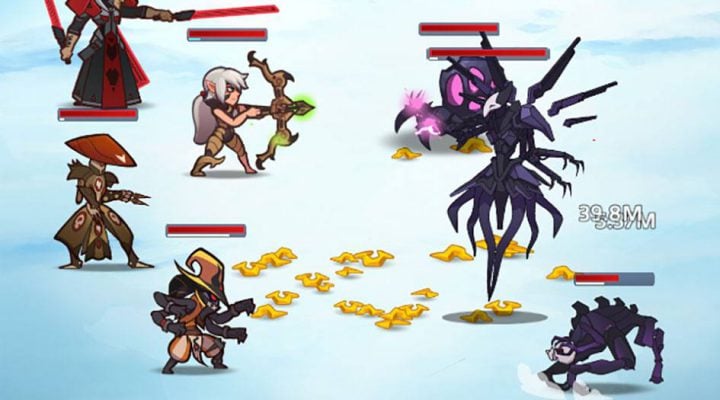 Plenty of unlocks to explore

Lacks the one more go factor

Games that tie in with other games are nothing new, which is quite fitting given that the gameplay in Battleborn Tap also feels like nothing new. It’s an idle clicker game, which means oftentimes you can accomplish more by not playing the game than by staring at it all the time. Like most clickers, it’s strangely satisfying accomplishing things and chipping away at what Battleborn Tap offers. Ultimately though, you’ll be sticking around for the unlockable rewards that transfer to the main game rather than anything particularly life changing.

You control a squad of heroes (pulled from Battleborn itself) as they battle it out against various enemies. Except, at first, there’s just you and your tapping finger. Every time you tap, you inflict damage on the enemies. Once you kill one, you gain some currency which can soon be used to upgrade your tapping ability or recruit a new hero. All new heroes fight automatically, so you can simply watch as they fight it out, thereby earning you coins automatically. 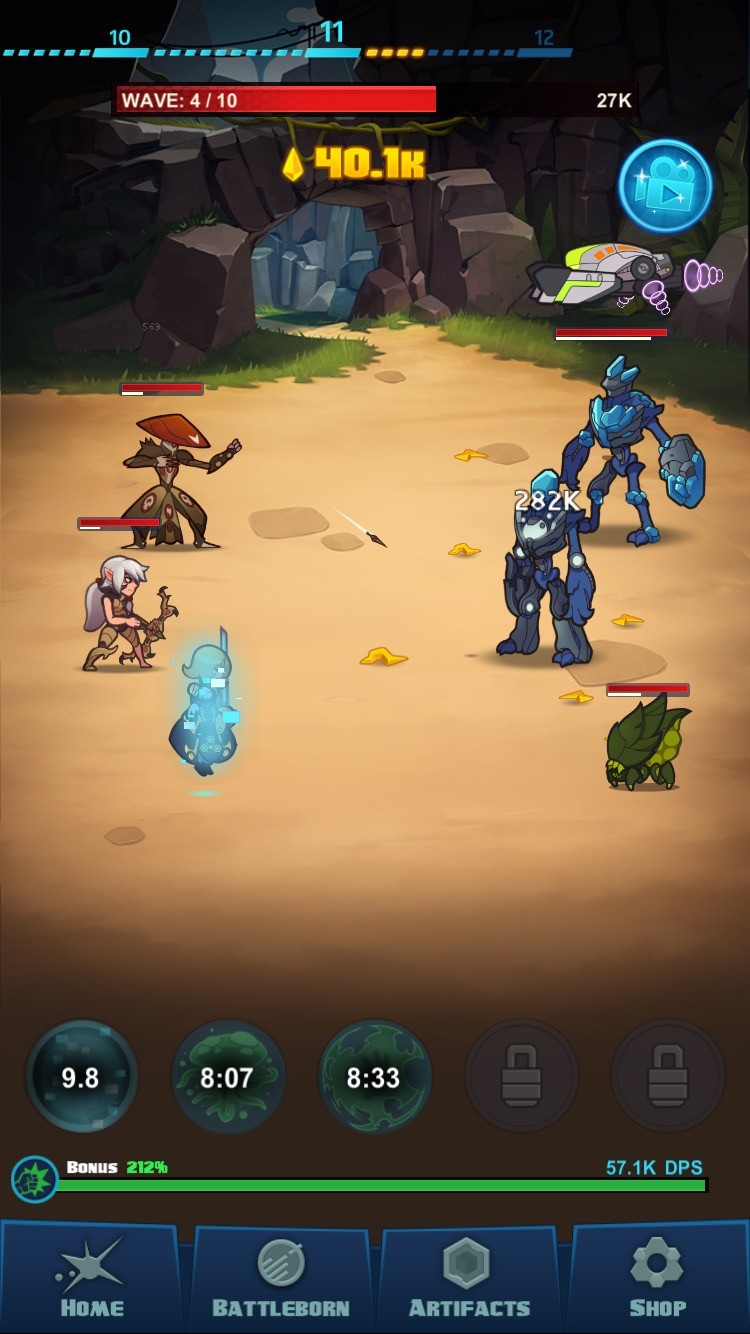 That concept continues indefinitely, but Battleborn Tap does throw a few varied features to ensure there are things for you to do. Each hero has their own special ability, which can change the course of battle drastically. They’re unique too, meaning different abilities offer varied animations, and a pleasant change of pace. They’re all on cooldowns, so you can only use them sparingly, but they provide one way to keep involved behind a flurry of taps. You can also tap on drones flying by in order to collect bonuses. That’s particularly handy given there’s plenty to unlock here through in-game currencies. You can always tap like crazy too, but you’ll soon learn that it’s much simpler to pump your money into the idle side of things. For one thing, you can earn money while not even logged into the game, which is always an advantage.

Such a generous attitude to income is useful given you can directly upgrade your heroes. By doing so, their attack strength goes up, but you can also boost their health separately. This process can be costly, so it’s convenient that Battleborn Tap is reasonably generous with dishing out coins. You can also upgrade special artefacts, which can do things such as boost your entire squad’s health or attack power. There’s a reasonable enough supply of things to do here, even if it is quite samey.

Battleborn Tap likes to encourage you to ‘prestige’ – resetting your earlier progress, while taking some artefacts with you. By ranking up in this way, you also unlock new characters to recruit. Each of them can also gain from new equipment that’s unlocked at regular points by opening a special loot crate. It’s all simple enough, but that irrational urge to get one step ahead ensures you’ll invariably play a little longer than your rational brain knows it should be doing.

Is it fun, though? Kind of. There’s a satisfaction in there that comes with most idle clicker games. I didn’t find myself gravitating back towards it quite like I have with other addictions, such as Clicker Heroes. Its drab exteriors, while well animated, give Battleborn Tap a dour feel. One that struggles to encourage you to be excited. Unlocking rewards for the console/PC game, though, is certainly tempting. After all, that’s the kind of thing companion games should offer. Once you get that far, you’ll probably cast Battleborn Tap aside, but at least there’s a purpose to your mindless tapping and watching of action unfold.