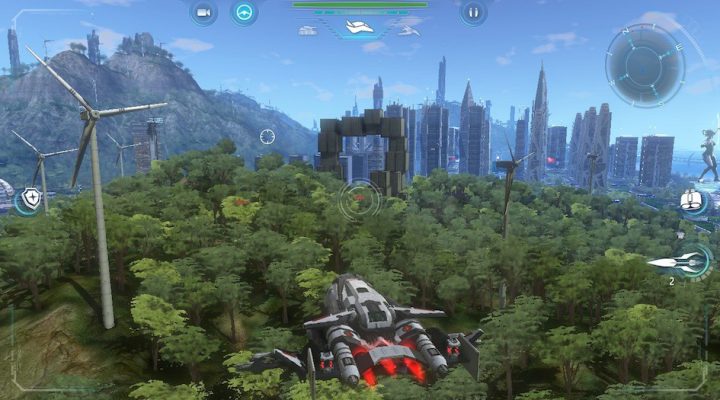 It’s nearly Winter where I live. A harsh reminder that the heating isn’t so great in this house and my hands get cold. I think I’m going to circumvent this issue by playing a lot of Battle Supremacy: Evolution. It’s not the greatest of vehicle based shooters, but it makes my iPhone 6s turn incredibly hot — which was initially unnerving, but actually quite warming for my hands.

Battle Supremacy: Evolution is kind of fun too, at least at first. Deeply entrenched in sci-fi sentiments, you’re able to switch your vehicle between a tank, drone, or airplane, depending on when the situation arises. Such morphing functionality harks back to games like Future Cop LAPD from the late 90s, and it’s something I’d love to see more of. 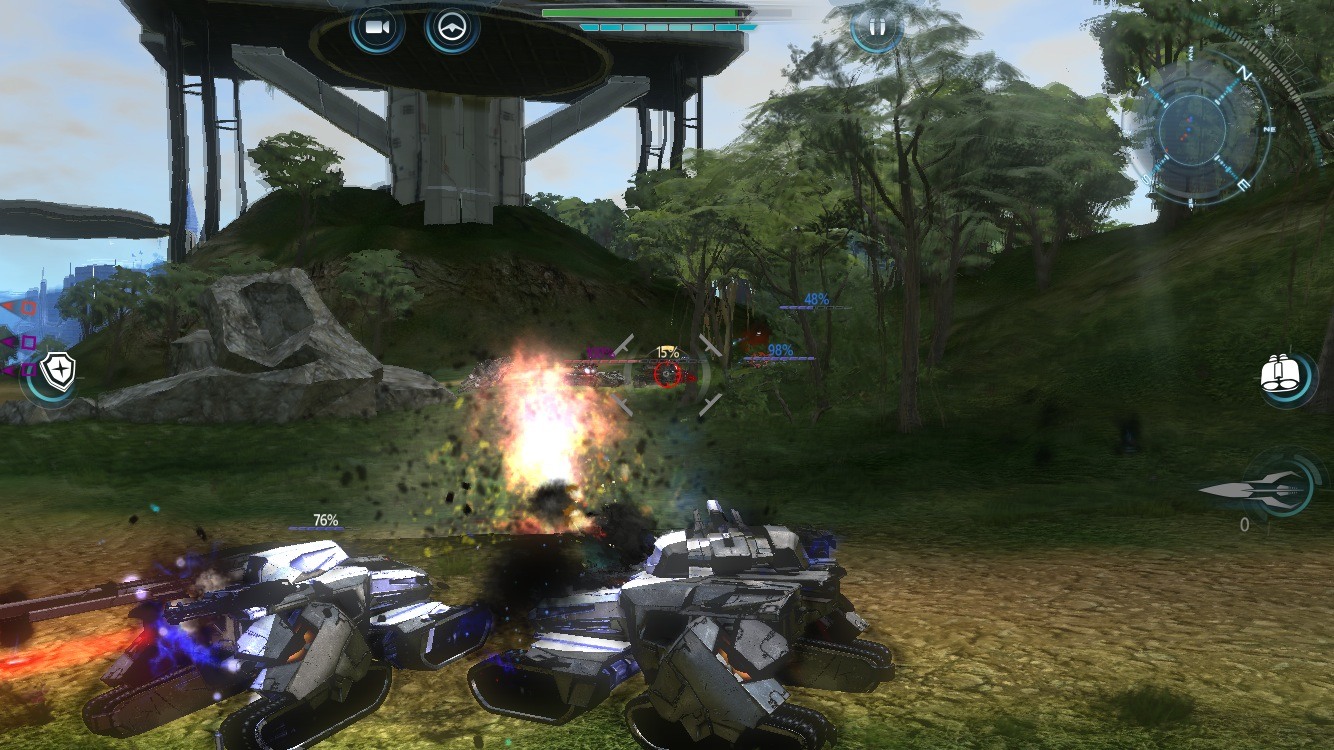 Each mission is typically a matter of escorting other vehicles to safety, or negotiating an area full of enemies. In either case, the same principle remains – shoot at everything.

Thanks to some rather impressive looking visuals, it’s fairly satisfying watching as you blow something to smithereens. You have manual control over a machine gun style weapon, moving the reticule around with one finger, while homing missiles are the real force to be reckoned with here. These involve waiting for a red square to surround your enemy before you hit the relevant button to fire them. In each case, you’ll feel good about lining up a shot just right, even in the heat of battle when you’re often surrounded by enemy vehicles.

Where Battle Supremacy: Evolution isn’t so fun is when you want to move around. Dodging enemies and keeping constantly active is a key strategy behind not dying, so this is going to infuriate you quickly. Moving is a matter of using your right hand to change camera angles, while your left tries to twist and turn to maneuver. “Tries to” being the operative term here. It never feels as comfortable or as natural as it should. The more time you spend with it, the more you get used to its quirks, but it’s really not a very smooth system.

You can always switch to auto-controls, with the game taking over movement, and you being left to handle weaponry. I wouldn’t recommend it later on in the game, though. While such a method saves you from wrestling with the awkward controls, the game’s AI isn’t very bright. Oftentimes, you’ll find yourself in a jam because Battle Supremacy: Evolution seemingly lacks a sense of danger. Sometimes though, you’ll switch to it, just to give yourself a break from the main thing that stops this game from being fun.

There are other strange design choices too. Most notably, an upgrade system that Battle Supremacy: Evolution doesn’t seem proud to show off. Instead of being freely available after every mission, it’s hidden away in earlier menus. If you’re anything like me, you’re too busy playing the game to think about going back, until you suddenly remember that it exists. It’s a fairly rudimentary system once you find it, but it does make a difference in how you perform. 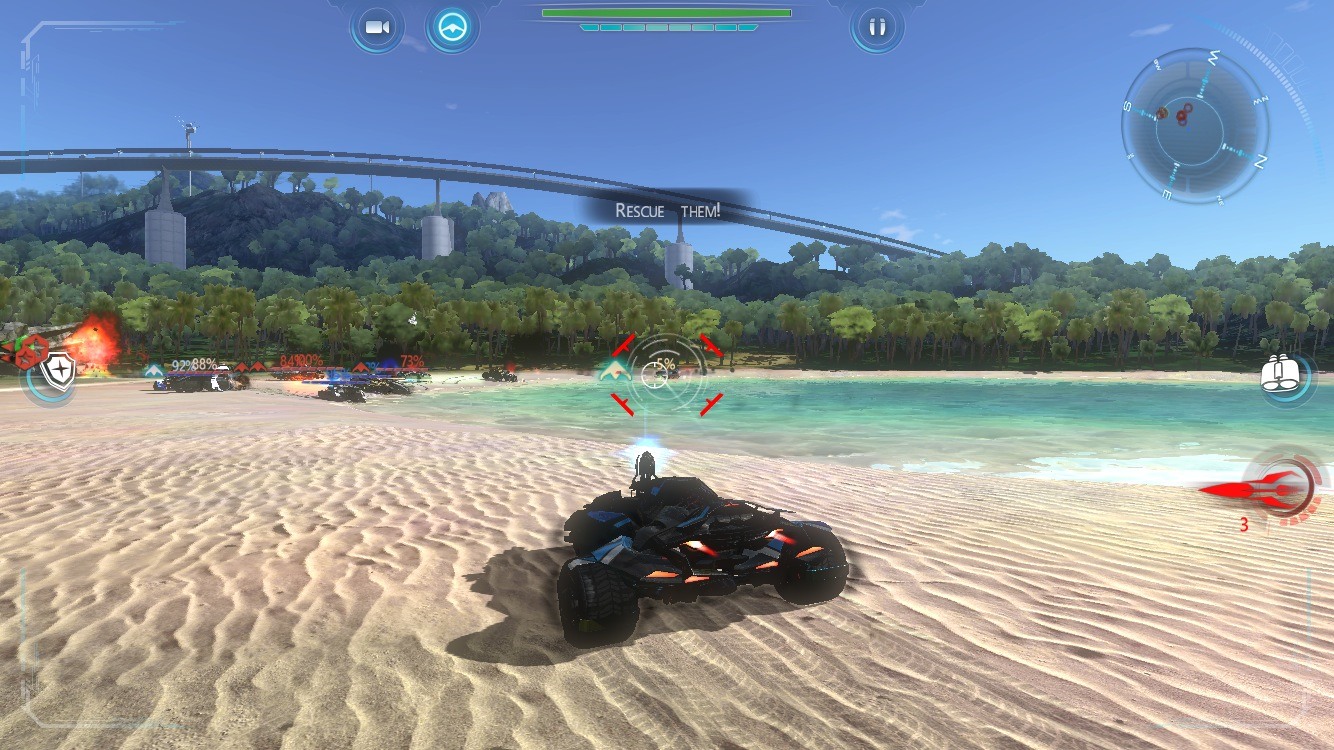 Besides the campaign mode, Battle Supremacy: Evolution also offers online multiplayer. It’s a fairly enjoyable experience too, when it works — although as always, I’d be cautious about how active the community will be later on its release. Your main reason for buying this should be to enjoy its meaty combat and impressive visuals, even if you’ll soon be a little annoyed at those cumbersome controls. What could have been a fairly fun vehicle shooter is all too often limited by such irritants.

Afterpulse Review: One More Round

Blood Bowl: Kerrunch Review – What Even is This?