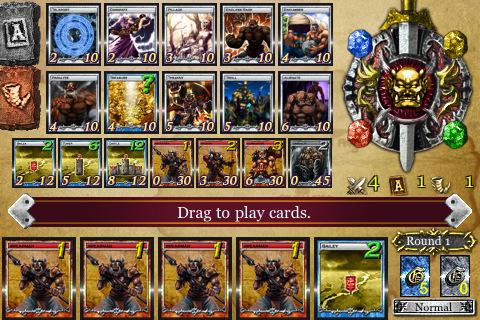 Battle of Gundabad tries to bring Dominion-style deck building to the iPhone, but fumbles at some key points

For a long time I used to enjoy playing collectible card games like Magic: The Gathering. Eventually however, having to constantly buy cards just got too expensive, and I sort of faded from the hobby. While those CCG’s have made the jump to iOS in the excellent Shadow Era, the idea of spending more money for better cards is still there. Enter the card drafting game, which gives you both the feeling of a CCG and not having to spend any extra money.

A few years ago the board/card game world was thrown for a loop with the release of the card game Dominion. It was inspired by CCG’s, but comes with tons of different kinds of cards. A group of those cards are taken at random and spread out on the table where you then “buy” them with in-game money over the course of the game. This let you build a deck with the cards you want, but keep it all on the table and not in your wallet.

Sadly, as of now there’s no official Dominion app (though board game aficionados like myself would just about kill for one), so other iOS developers have noticed the gap and started to fill it in on their own. Such is the inspiration for Battle of Gundabad, a card drafting game. As mentioned above, you’ll build a deck over the course of the game by buying and adding it to your hand. Then you can play cards to kill your enemy.

My biggest issue with the game is easily the user interface, which, if I put it very nicely, needs some help. About 20% of the screen is taken up by the menu, but you wouldn’t know that since none of the menu options are marked clearly. How am I supposed to know the red crystal is “help” and the yellow one is “option”?? The interface clearly wasn’t designed with clarity in mind.

In addition to that, tapping the weird looking face in the middle of a crest is the confirmation or end turn button. Not only does it take up way to much room (why make a coat of arms part of the menu?) it’s also needlessly confusing – aggravatingly so. In an additional kick of stupidity, the menu isn’t detailed in the help screen, so you’ll need to quit out and go to the tutorial. Yea, makes NO sense. With the real estate of the iPhone in such short supply, this is a huge oversight.

The other serious issue holding back Battle of Gundabad is the lack of any kind of multiplayer. This is the kind of game that screams for local and online multi person matches. The AI is nice while learning the ins and outs of the game, but the bread and butter of titles like this lie in playing other people. It’s one of the places Shadow Era excels. With nothing but the AI to play against, I just felt deflated.

I was pretty excited at the notion of getting a Dominion-style game to take on the road with me and to always have people to play against. As for now I have to say those hopes still lie unfulfilled. Battle of Gundabad may be a deck building game, but with only AI to play against and a confusing layout to contend with, I don’t think it’ll convert anyone to thgenre. File this one under “missed opportunity.”

Margrave: The Curse of the Severed Heart Review