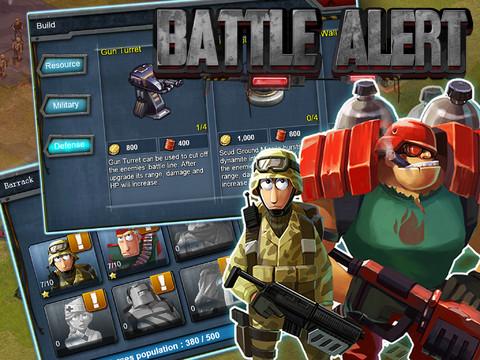 Battle Alert is a fun but flawed strategy game.

The casual market is so crammed with strategy games these days that the excitement surrounding a new release seems on par with switching out rolls of paper towels. Almost without fail, we can guess that the newest contender will have us stockpiling resources or tinkering with command centers to train new units, but occasionally a game comes along with enough innovation to recapture those first moments with Starcraft long ago. Battle Alert, alas, isn’t one of those games.

It follows the established paradigms so dutifully that I tremble at the thought of filling the page below with observations on what sets it apart, and yet, for all that, it’s not a bad game despite a few rough edges. In fact, it’s rather fun.

A lot of this has to do with the presentation. A clear love of the Team Fortress series reveals itself in the artwork for the different units that adorn the opening splash screen and the menus, and this cartoony coating does much to separate Battle Alert from the dozens of oh-so-serious titles lurking about the App store. True to the recent tendency to sneak in something for an “older crowd,” there’s even a bizarrely out-of-place suggestively clad female officer who announces when certain buildings have reached completion. It’s regrettable that this same aesthetic doesn’t extend to the voice emotes that sprinkle the gameplay and accost you during the first few seconds while the game loads. For the most part, it’s the same old tough-guy shtick, and some auditory diversity might have done a better job of distinguishing it from its peers.

That’s important, because if you’ve ever played a real-time strategy game, you’ll know exactly what to expect here. It’s fun but formulaic. You’ll start out by (you guessed it) laying out and upgrading your resource buildings, and eventually you’ll move on to peppering the area around your base with Scud missiles and turrets. The units themselves range from tremendously powerful tanks to comically weak foot soldiers, although more colorful units such as mech striders and flamethrowers sidestep the threat of mediocrity. You’ll learn how to use this motley bunch through a substantial campaign mode that presents scenarios that roughly demonstrate what lies in wait once you muster the courage to shrug off the safety bonds that keep other players from attacking you, although it won’t take long (realizing, as you likely are, the potential behind all those upgrades and new units) for you to realize that Battle Alert‘s PvP will drive home the sad fact that war is hell.

Of course, that’s why a lot of people will find Battle Alert fun. For the purposes of review, I jumped into PvP early, and recoiled in horror once I saw that my full army was cut down after I tried invading a player’s camp that was two levels lower than my own. (Yeah, I know–that’s what I get for being a jerk.) He’d obviously made some wiser decisions than I had, and I didn’t fare any better once I found my own camp under attack. Even with Battle Alert‘s refreshingly simple touch-and-place method of unit placement, I just couldn’t hold up to better planning. There’s thus a lot of room to experiment here for the pocket strategists among you, and that dose of challenge might be enough to label Battle Alert worth a download. 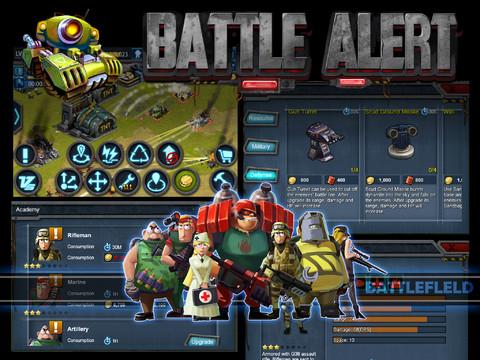 Just keep in mind that construction and research times seemed designed by the Rip Van Winkle school of strategy. Battle Alert is one of those games that starts slapping you with epic waits but minutes after you boot it up, although it gives you a hefty stash of premium cash if you want to splurge it on speeding up operations. But eventually you’ll find yourself balking at the hours-long wait games, particularly when your base is in danger of attack from other players and your only alternative is to spend an ungodly chunk of cash just to buy enough currency to keep yourself alive. Other small issues mar the experience, such as grammar mistakes that border on both the illegible and hilarious.

Battle Alert is thus a flawed but perfectly serviceable strategy game. It manages to downplay those flaws with the help of a colorful aesthetic and fun gameplay, but even so, they might be enough to deter you if you and your friends already have a real-time strategy favorite on your mobile devices.