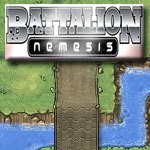 It’s been said that imitation is the sincerest form of flattery; if that’s the case, then UrbanSquall has created one of the most impressive pieces of flattery ever with the Flash game Battalion: Nemesis. The object of this affection? The seminal real-time strategy series, Advance Wars, which were some of the best to be made in the past decade. Even though those games were released for the Game Boy Advance and Nintendo DS systems, they featured strong stories, quirky graphics, and addictive strategy gameplay.
Battalion: Nemesis recreates all of these factors and renders them in higher-definition graphics. Granted, this is not a mere copy of Advance Wars with some new gloss thrown on; this is a game that serves as a love letter while simultaneously providing improvements on the already-established formulas.
The most obvious inspiration from the Advance Wars is the game’s graphics, which feature a simple and cartoony style. The story is also told through a similar narration style, with portraits of characters and accompanying dialogue. The music is also of high-quality, since it features a lot of military-esque tunes with lots of horns.
Across ten stages, players control Captain Tucker, of the Red Army, who is fighting the good fight against the Blue Army. There’s a bare-bones plot here about the pursuit of a Red traitor and the awesome technology in his hands; it’s not a bad one, but it’s not all that noteworthy, either. You can click through the dialogue sequences and just go straight to the strategy without any loss of enjoyment.
While it may sound like Battalion Nemesis is overly-simple, its depth quickly becomes apparent. Units are more susceptible to attacks from certain other units, terrain can hamper/help movement while providing varying levels of cover, and an increasing amount of planning is necessary in order to win. Do you want to manufacture a fast-moving tank or a slow rocket launcher with a longer attack range? Should you destroy that tank on the bridge or spend a turn repairing your own assault vehicles? Should your commandos cross the mountains and capture an oil refinery (which provide more cash to create new units and make repairs) or should they head for cover and make an attack from cover during the next turn? At first, questions like these don’t matter, but they start to become increasingly important if you want to survive a battle.
Depending on the difficulty level you play at, strategy is varyingly important. Basically, the higher the difficulty level, the smarter the enemy A.I., though enemies also gain some slight advantages to unit strength and resource production on the hardest setting. There were a couple of times when enemy units pointlessly milled back-and-forth for no discernable reason, but these were isolated incidents and the computer-controlled opponent was generally quite tough on the hardest difficulty.
As opposed to other real-time strategy games, Battalion Nemesis features battles that are generally short enough to complete within ten to twenty minutes. That’s partially because of the fast-paced nature of the game, and partially because none of the maps are overly large. It’s also easy to walk away from a game, since you can easily save in mid-battle and then return later on.
Battalion: Nemesis is the first part of a trilogy, the second part of which was recently released to the Web. If the sequel is as good as the first entry, then players are in for a treat because this is an excellent single-player game, can be used to kill a couple of minutes or a couple of hours without any problems, and is tons of fun on any difficulty level.