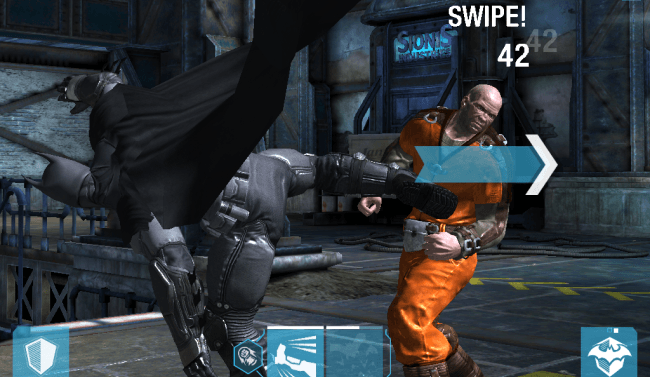 The bat is back!

As a huge fan of Rocksteady’s Batman Arkham series on home game consoles, I’ve been one of the many fans eagerly anticipating the release of the gritty prequel, Batman: Arkham Origins, coming up at the end of the month. But in a much-welcomed and surprise move, NetherRealm Studios has graced us with a mobile tie-in version of Batman: Arkham Origins. Coming from the same developer who gave a similar mobile treatment to other big-time superhero games like Batman: Arkham City and Injustice: Gods Among Us, how would this latest touchscreen brawler hold up to the expectations of excellence that Batman has brought to the gaming world at large in recent years?

Spoiler alert: it holds up well, very well. The fully voiced and animated opening cinematic of Batman: Arkham Origins is simply astounding, and it made me feel like I was watching a full-fledged console game right there in the palm of my hands. The graphics elsewhere in the game are also up to the highest of caliber, from the fluid combat animations to the nice variety of thug types and environments, and the dark and ominous tone of the Batman Arkham console games has been revitalized here quite gloriously. Much like its upcoming big brother console game, the story of Batman: Arkham Origins involves a number of deadly assassins all vying to be the one who kills Batman once and for all, in order to win a substantial monetary reward. This allows the game to incorporate some wonderful and frightening boss fights against these assassins, like Deadshot, Copperhead, and my personal favorite, Deathstroke.

The actual gameplay of Batman: Arkham Origins is extremely top-notch, and should be familiar to anyone who’s ever played Batman: Arkham City Lockdown or Injustice: Gods Among Us. In each combat mission, players simply tap on the screen to pummel oncoming hordes of street thugs and other devious villains, while holding down two fingers on the screen to defend against blowbacks and other cheap shots. What’s great about this is that the control scheme is so easy to get into, but offers just as much depth for those players who really want to make the most of it. Batman is capable of holding two different battle stances, an Assault Stance and a Guarded Stance, and activating each one opens up a number of additional special attacks or healing boosts that you can activate mid-fight.

But don’t get me wrong: the battles get much more complex than simply tapping anywhere on the screen, as executing special attacks often involves swiping the screen in various directions, and blocking certain special attacks from the enemy could have you quickly tapping on incoming bullets before they manage to reach you. Akin to the console Batman Arkham games, most of the thugs are fairly easy to take down, and I absolutely love the way the game lets you take them out in quick succession in any single mission: it really makes you feel like you’re making actual progress by knocking thug after thug to the ground before another one jumps into the fold, instead of just pounding mercilessly on the same overpowered villain until one of you inevitably ends up going down. Now the boss fights, on the other hand, are a different (and excitingly tactical) matter entirely.

The mission map of Gotham City is split up into four different districts (Uptown Gotham, The Docks, Downtown Gotham, and Industrial District), and you’ll be able to unlock them one by one as you move through the game and take down more unruly assassins. There are a number of different mission types that emerge in each one: from regular fights that progress the story of the campaign and daily challenges that offer some serious EXP rewards, to Most Wanted challenges that let you replay them to earn up to 5 stars and the exhilarating boss fights that pit Batman up against one of the deadly assassins themselves. Special challenges and boss fights also bring back some of the limitations and special rules, or modifiers, that were seen in the console games’ challenge maps, like working against a countdown timer or having a constantly draining health bar by means of poisonous gas.

Each mission takes a few chunks out of a stamina bar, but you’ll be able to refill the entire thing with only a single unit of premium currency, and considering how many of them you earn just through regular gameplay, this was hardly ever an issue. The upgrade system in Batman: Arkham Origins is also wonderfully in-depth, without ever getting too overwhelming or seemingly unobtainable. In addition to leveling up through regularly earned experience, you’ll be able to upgrade your character throughout the campaign in one of three different areas: Skills, Assault Stance, and Guarded Stance. Skills are defined as things like your overall power and your tendency to land critical hits, while Assault Stance is focused on your special attacks like the Batswarm and Shock Gauntlets, with Guarded Stance being reserved for more defensive measures like the Health Booster. Each different skill or ability comes with dozens of upgradeable tiers that can be purchased in between the many fights to help Batman get stronger and stronger for his next one-sided bout. 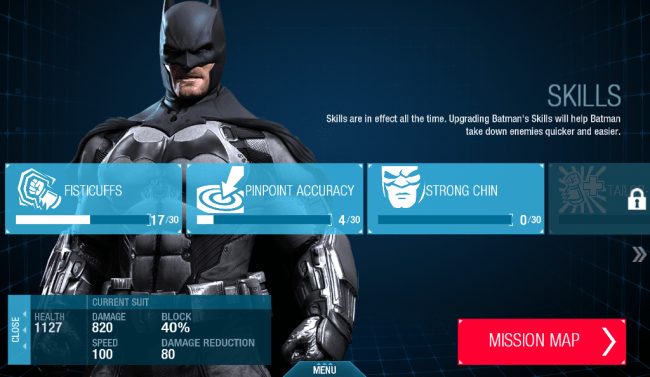 These upgrade tiers will go up in price incrementally the more that you buy them, but you’ll always be rewarded with both Upgrade Points and even Waynetech Points, the game’s form of premium currency, as you complete levels in the campaign, and so the overall character progression feels wonderfully paced and perfectly gradual. The only real items in the game store that you’ll probably have to purchase with your own money are the completely optional Batsuits that Batman can wear, like the Dark Knight and Batman Beyond skins. Each Batsuit can be unlocked for purchase the further you progress in the campaign, and in addition to providing some crucial combat boosts like extra health or increased damage, every one of them just looks cool as all hell, and I had absolutely no problem splurging on one or two of my early favorites.

So in the end, I couldn’t find a single negative thing to say about this game: and there’s really no reason to talk about them even if there were. Simply put, Batman: Arkham Origins is the definitive example of a console tie-in game done right, with a shining presentation, rewarding touchscreen controls and combat, a refreshing amount of variety, and a free-to-play model that accentuates the overall experience, rather than takes away from it. While the game will certainly be the best way to pass the time until the console version hits shelves later on this week, there’s no doubt in my mind that many of us will still be returning to the mobile Gotham City in the months down the road to defeat some more deadly assassins just in time for the holidays.