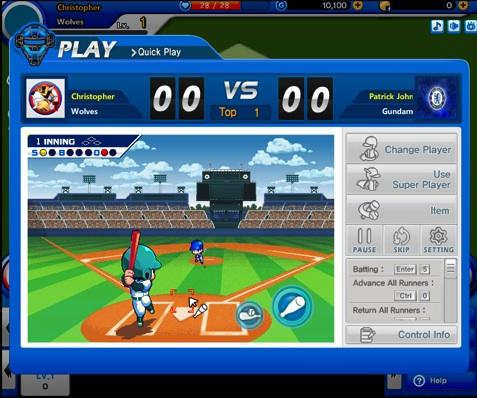 Baseball Superstars: The League takes the series in a social direction

Gamevil has moved Baseball Superstars onto Facebook with Baseball Superstars: The League. A popular smartphone title, the new Facebook app brings much of the original to the social space. With simple controls combined with role-playing elements and business management, the game works well but isn’t always direct in its instruction. Moreover, it disallows much play in the first sitting.

For those that might be unfamiliar with the Baseball Superstars series, they are typically anime-style, sports RPGs where players manage their own baseball team. The game also has several over-the-top abilities and characters such as nurses, explosive pitches, demons, and so on. Much of that is still in tact with The League, which is now broken up into basic baseball and team management.

When you first jump in, the only semblance of direction is a giant red arrow pointing at the “Play” button. This takes you to a screen that let’s you play one of three Superstars-style baseball games: an exhibition match with a friend, an asynchronous quick game against another user, or single player homerun derby. Each grants you gold and experience at the cost of slowly recharging energy. The only exception is the exhibition, which costs no energy, but can only be played once per day.

Once in a game you can control the batting and pitching. Batting it is merely a matter of timing, clicking the mouse when the ball crosses the plate. As for pitching, it’s controlled about the same way, though you get to choose what type of pitch to throw — fastball, curve ball, etc. — and where to throw it. There is also an option to have the rest of the game played automatically to speed things up.

For the management half of the game, each player has stats associated with them — such as hit power, running, and so on — that augment performance. In order to enhance these abilities, you can build training facilities within a city-building-style space (which can also be decorated). At the cost of energy, you can train players to improve their stats over a period of time. Additionally, there are buildings that earn extra, periodic income at the cost of energy.

One of the more interesting aspects of The League‘s management system is that players age at the rate of one year every 10 days. At 31, their abilities begin to decrease. This forces you to either purchase age-rejuvenating power-ups or recruit new players by purchasing “Player Cards.”

Beyond stats, you can also equip your players with special items such as helmets and bats. These not only give players new looks, such as demons or angels, but drastically increase their capabilities. That said, many cost Facebook credits. 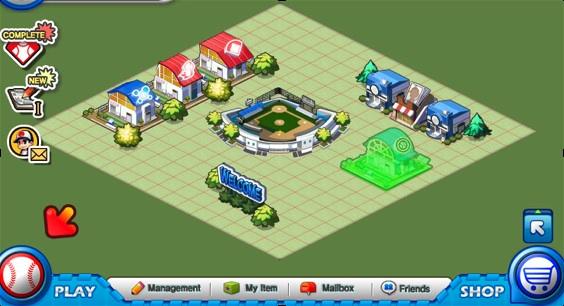 Other than the lack of play instruction, there isn’t a whole lot to complain about with The League. If anything, it doesn’t feel as involved as the originals, so it might be hard for its charm to hook new players. This is because energy consumption isn’t terribly balanced. When you start out you have very little energy, with a quick play game costing 10, and actions within the virtual space eating up even more. This means that play is done within about five minutes or so.

This isn’t bad in social games, but for new users, most social titles let them level up a bit in their first sitting, allowing them to get a better understanding of the game’s entirety and feel like they’ve made some forward progress. Here, you’ll likely to only reach level two in your first session, unless you sit and wait for energy to recharge,

As far as the presentation of The League goes, its quality is on par with the rest of the franchise. The game seems a bit lax in terms of the amusing, anime-like characters, but the cartoonish feel of everything else is still present, and the upbeat music and sound are as appealing as they ever were.

Overall, for fans of Baseball Superstars, the ability to play with others is a big plus for Baseball Superstars: The League. It has quality concepts for team management, and adds in a simple city-building mechanic. Granted, the game isn’t always clear with instruction, but it isn’t terribly difficult. The only real issue is that new players don’t get to do much initially, so it’s harder to get hooked. In the end though, if you enjoy the mobile versions, you’ll probably enjoy The League.