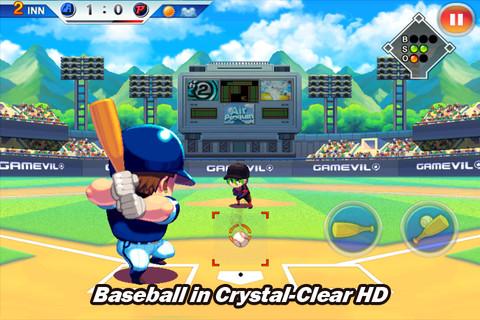 Aliens, anime girls, and a pretty good game of baseball

Baseball and anime is probably not the most ideal combination. Most people that enjoy anime are not going to like baseball, and vice versa. Despite the odd mixture of themes, Baseball Superstars 2012 plays a surprisingly good game of baseball.

Baseball Superstars 2012 is a freemium game from Gamevil, and the amount of content on offer here is pretty impressive. In it, you can play as a batter or pitcher in a career mode of sorts. You play a 45 game season where you try to meet goals you set for yourself out at the start of the season (for pitchers, ERA, WHIP, strikeouts, etc., for batters the goals are hits, RBI, HR, batting average, etc.), while also training your player to increase your abilities.

The game has a neat overworld system. In it, you have the stadium where you’ll play the games and gain activity points which can be spent in the yard training your player, your house for resting up, a hospital for nursing injuries, a park to do a part-time job for extra cash, and a shop to spend your money on better equipment.

This aspect of the game can be a bit overwhelming. Training is fairly slow and there are a lot of different factors limiting what you can do. If you’re going through a slump in batting, your morale will go down, so you will need to rest up at home and get morale back up—otherwise it will negatively impact your performance on the field. Additionally, you will also want to do some part-time job work to gain some cash to get better equipment. You can also spend real-world money to speed up the healing or training process, but it really isn’t necessary to do to have a good time.

The overworld area also includes a very awkward love aspect. You can talk to your typical busty anime girl, gaining a bit of hitting, power or running skill through the interaction. The game could probably do without it, but then again, it also includes other-worldly characters like Ghost, a green-flaming demon character, so chasing some anime girls isn’t terribly out of place.

The game has two different control schemes, “Smart” and “Classic”. When you bat in “Smart” mode, you use your device’s accelerometer to aim the batting reticule. I had my doubts on that control scheme’s viability, but it was surprisingly easy to pick up and immediately get a hang of. Gauging pitching speed was another issue. The difference between the speed of a curveball and a change-up is only a couple of MPH displayed in the game, but in actuality, the difference couldn’t be starker. Expect to strikeout early and often in the game until you get a better grasp of the pitches you’ll see. 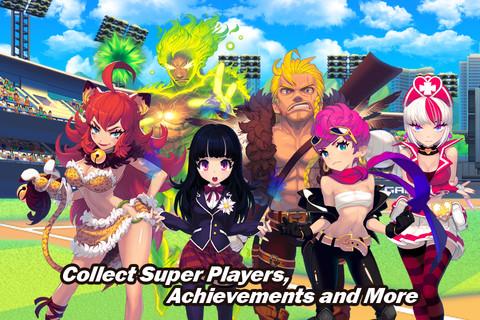 Pitching is much easier to pick up. When you start, you’ll get three different pitches (and a super pitch) to choose from. Each pitch has a specific motion that you draw to place the pitch. I never really had an issue with controlling pitches due to the lack of a control meter (which, considering the platform, is a great choice).

In both modes, the overworld is similar and the setup is the same. The games are simulated until you are batting or pitching. If you want to play a full game of baseball, you can play the “My Team” mode. It has some slight tweaks to the individual modes, but plays essentially the same game of baseball.

Despite the bizarre combination of baseball and anime, the game works well and has a nice amount of content. If sports fans can look past the anime style, there is a surprisingly good game of baseball here. It is not going to replace MLB: The Show on consoles, but it’s good enough for baseball junkies to play on the bus ride to work.