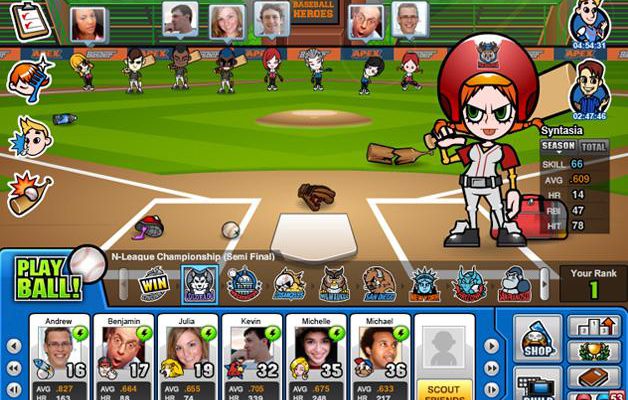 Not out of the park, but definitely on base

Most of us will never know what it feels like to blast the game-winning home run, soak in the adulation of the fans, and make the media wonder if we just did it without “help.” But we can get a pretty decent simulation of those first two experiences with Baseball Heroes, a free Facebook game from Korean studio Syntasia. So put on your cleats, mind the pine tar and swing for the fences.

Before you get to the diamond, you’ll first have a chance to design your own slugger. Head shape, eyes, nose and mouth are all customizable, and can be changed later (for a price) if desired. You’ll also pick a home for your franchise from one of 16 U.S. cities plus pick a nickname for your squad.

The goal of Baseball Heroes is pretty straightforward: Take your team from Rookie ball to the Major Leagues, picking up as many championships as possible along the way. The road to the Majors unfolds in 30-game seasons, complete with playoffs if you can guide you team to fourth place or better. Completing a certain number of seasons at each level earns you an automatic promotion.

Gameplay dispenses with annoyances like pitching, fielding and watching other players bat (baseball purists, please note the sarcasm there). Instead, it speeds through a simulation of all of the at-bats until it’s your turn at the plate. There’s a definite element of skill involved in batting, as the opposing pitchers throw a variety of different pitches, each with its own speed and movement. Success means waiting for a pitch in the strike zone and timing a press of the spacebar or click of the mouse for just the right moment.

Along with good timing, your hitter will also depend on his Contact, Power and Luck attributes. These can be increased with Skill points rewarded for leveling up by winning games or completing quests, or by purchasing better equipment. Gloves, belts, helmets, shoes, bats and goggles give you a wide range of power-up options. Some can be had for Coins, the game’s basic currency, but the best stuff can only be purchased using Facebook credits. Yes, the guys and gals at Syntasia have to eat, but that’s still kind of a bummer. 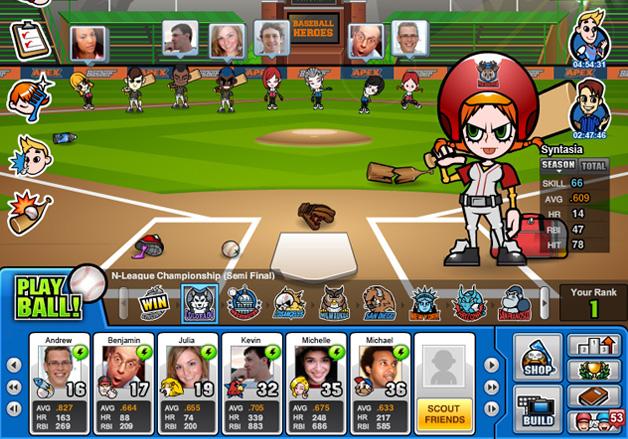 Improving your character is important, because you’re going to feel like Andrew McCutchen on the Pirates early on. The other eight players in your lineup start out hitting right at the Mendoza Line (also known as .200), and while they can also level up, they do it very slowly. Getting your friends to play helps since every one you recruit can boost the abilities of one of your non-star teammates.

Your other hope for a better team comes from obtaining Special batter cards. Up to five of these cards can be included in your lineup – three slots can be purchased with Coins and two more with Credits – after you buy them from the game’s shop. Special batters come in a variety of grades, but all offer higher averages, boosts to your team’s Combo meter and the chance to get a guaranteed hit if they reach the plate in a specific inning. Some can be improved individually, and three of them can be combined in a vaguely Frankenstein-like process to form one even better hitter.

Once you get the basics down, Baseball Heroes falls into the pattern of many other Facebook sports games in that it’s pretty much rinse, lather, repeat from there on out. There are achievements to try for and your stadium can be upgraded, but the core gameplay is what it is. Collections and the ability to challenge other human players are listed as “Coming Soon” for the time being. 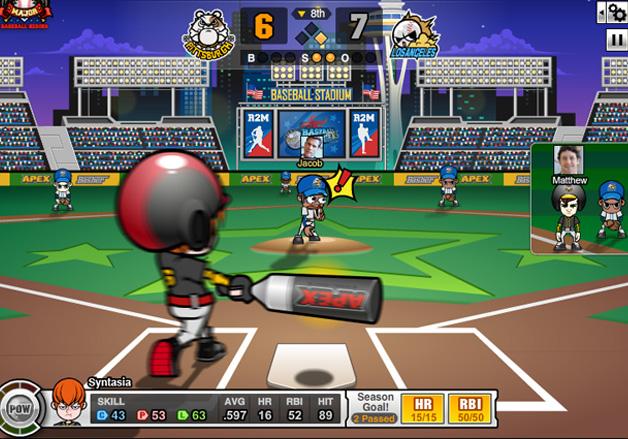 Visually, there’s no doubt that this game came from the East. Anime-style characteristics are visible in everything from the players to the team logos to the speed lines during the team match-up screens. As is always the case with this kind of style, your mileage may vary.

It’s safe to say that Baseball Heroes doesn’t reinvent social sports games, but its batting interface and overall atmosphere do help it stand out a bit. For baseball fans looking for something different on Facebook, it’s certainly worth a few swings.