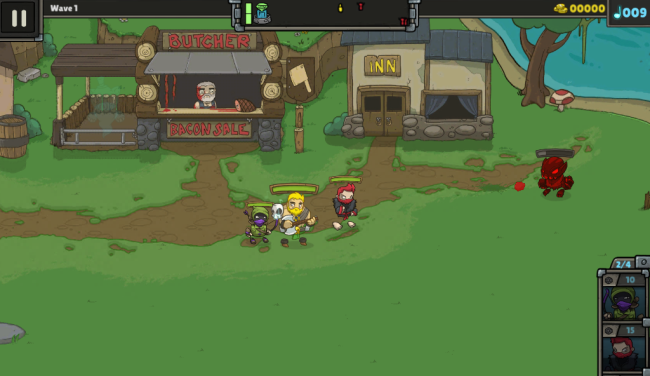 Go forth and rock!

There has always been a fine line between a bard and a barbarian. In fact, the two traditionally couldn’t be any more different: one is a highly refined poet from medieval culture, while the other is a ruthless warrior who often wields a club. But much like its name, Bardbarian from BulkyPix and Treefortress not only manages to weave together these two vastly different ideas in flawless fashion, but it also strings together a number of tried and true gameplay mechanics to make for one enjoyable and long-lasting defensive-adventure: one that the mobile scribes of our time are sure to write about one day.

Let’s start out with the game’s story and presentation, which do just enough to set the stage for the onslaught of awesomeness that is waiting just behind it. Bardbarian is wonderfully self-aware and just downright funny, from our hero Brad’s growing annoyance at having to save his town from evil yet again (and also being “tired of grinding XP and saving useless NPCs”), to the ironically-named Tutorial Goblin who helps you get into the basics of play.

There’s an inherent musical theme that runs throughout the story and gameplay, with Brad combining his deadly axe and a lute to make a truly rockin’ instrument that lets him pull off some pretty sweet and power-inducing solos. Seriously – the gameplay will stop for just a second as the player activates a special power, treating everyone to a quick animation of Brad wailing away on his axe with pure metal passion. The whole thing has a huge Brutal Legend vibe going on beneath the surface, but the beautiful 2D visuals and smooth animations give the game its own unique sense of charm entirely.

At its core, Bardbarian could quite simply be described as a cartoony defense game. The main goal is to protect the shimmering Town Crystal from being destroyed by waves of goblins and other baddies, but the total experience winds up being so much more than that. You see, the catch is that Brad himself cannot attack, and so instead he relies on recruiting a number of various medieval-style units like archers, wizards, and more to do all of the heavy lifting. Your units will automatically swarm around Brad and unleash their respective attacks on any enemies in the near vicinity, sort of like the base mechanics of NimbleBit’s Nimble Quest. The controls are also just as simple: you drag your finger on the screen to where you want Brad and his merry band of fighters to move, and away they go.

What this ultimately boils down to is an extremely hands-on action experience, as your initial strategies and defensive measures are just as important as expertly weaving in and out of the enemy’s attacks that will quickly turn the playing field into a borderline bullet-hell experience. As you play through the game and slay wave after wave of baddies, you’ll gather coins and music notes, the latter of which allows Brad to recruit more units and unleash other mid-game bonuses like attack boosts or a faster movement speed. Your units are easily replaceable with more music notes; but if Brad himself or the Town Crystal fall, well then I’m afraid you’re all out of luck.

All in all, there are 21 different waves to conquer in the game, which might not seem like much, until you take into account Bardbarian‘s challenging difficulty level and highly addicting sense of progression through an intricate system of upgrades. After every four waves you’ll encounter a monstrous boss wave that will really test your reflexes and pre-planning abilities. Should you bring a healer on your team? Or should you just unleash the fury of your most powerful attack units? It also helps that you’re allowed to start a new game from four different checkpoints after each boss, to eliminate the frustration of being sent back to the beginning after every failed attempt. In either case, the amount of replay value in this game, not to mention the consistent desire to keep on playing, is simply astounding.

In addition to upgrading each of your individual units as well as your hero himself, coins can also be spent on increasing the health of your Town Crystal; allowing shopkeepers to stay open during battle and provide you with extra health items and other goodies; and even improving Brad’s “Bodyspray,” which enables your units to band together in a more tightly-knit and controllable circle. Every single one of these upgrades feels so important to your ultimate success in the game that you’ll actually have a hard time trying to decide which one to spend your money on first. Luckily, the good news is that everything in the game store is very appropriately priced, and you’ll never once feel like you’re being forced to grind, or that the developer is trying to put their hands in your pocket. 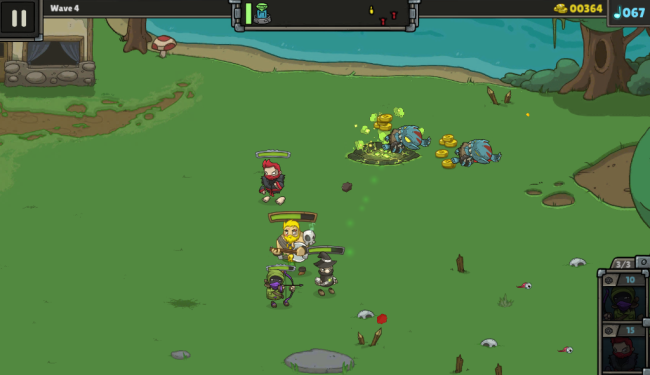 I was constantly surprised to find how much the experience continued to grow and expand the more that I delved into the game. What started out as a fairly simple action-strategy hybrid quickly turned into a vibrant multi-genre experience, as the battlefield morphed to include town drunks, a dozen different types of powerful units, and a googly-eyed Ratcoon that scampers around fetching you coins.

In every way imaginable, Bardbarian steps up as the perfect mobile experience, and it has everything you could ever want in a video game, for that matter: a fun-loving presentation, a seamless blend of different gameplay types, and an addictive balance of challenge and progression that will always keep you coming back for more. Needless to say, after the flawlessness of Brad’s latest rockin’ adventure, I don’t think he and his team will ever have to waste their time babysitting useless NPCs anymore!