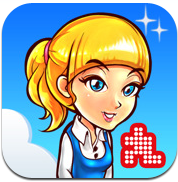 Bankers aren’t the most popular breed in the world right now. Thanks to their reckless actions, most of us are living rather more frugally than we were a few years ago. Fortunately, Banker doesn’t ask you to slip into the oily shoes of a Wall Street hot shot. Rather, it concerns itself with the front line money management of your local branch.

Granted an overview of a fairly typical bank, your task is to guide customers to the services they require as quickly and efficiently as possible. This starts with fundamental services such as financial advice, photocopying and ATM machines, and soon branches out as you move onto more sophisticated premises in different countries.

You direct customers around by touching them and dragging them over to the required service, which is indicated by a little icon above their heads. It has to be said that this isn’t the smoothest process, and occasionally I found that the customer failed to stick to the appropriate service when I dropped them on it.

Leave any customers waiting for too long and they’re liable to storm out in indignation. Each customer has their own tipping point dictated by type – so the businessmen in suits have lots of cash to splash around but little time for dawdling, while students are patient and quick about their work (that doesn’t sound like any student I know) but low on funds (that’s more like it).

Losing customers is a sure-fire way to end the level with a bad rating. This is problematic, as you only unlock the next country (all six of which contain five levels) once you’ve won a medal in all of the stages in the previous country. This is a little too unforgiving for the casual player, and we would have preferred a system that required only, say, three medal in each country, or where an accumulated points total did the trick.

Still, that’s not the chief problem Banker faces. The control issue mentioned above is compounded by the annoying need to touch a customer again to start their activity. It’s equivalent to leading a horse to water – and then having to make it drink.

Also, Banker just isn’t especially fun to play. There’s a critical lack of variety on display here, with new services and items of equipment serving no function other than to boost the number of customer destination points. Other time management games do this too, of course, but they seem to disguise the fact a lot better.

If you look at similar attempts to mix time management and tycoon elements, like the Megaplex Madness series, the difference is telling. Those games (which are now represented on iPhone too) manage to make each activity feel distinctive and necessary, and not just part of an arbitrary tick list as it feels here.

While Banker is a bright and accessible attempt to bring Diner Dash-style gameplay to the rather more dry world of financial management, its gameplay is too repetitive and shallow to warrant any kind of investment in time or money.