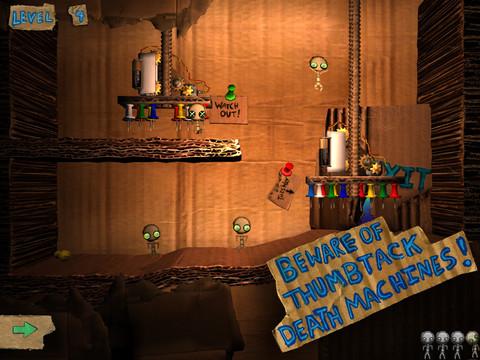 As a child, every single object in your desk is fair game for some sort of contraption or craft. There’s something wonderful about the innocence and imagination that go come from a child creating entire worlds out of simple household objects and school supplies, and Backflip’s Band Together captures this essence perfectly.

In Band Together, you control the Bandies, a group of sentient cardboard beings that are subject to the curious child experimenter, Midge. Like any curious young child, Midge wants to see if the Bandies can survive her death traps of screws, thumbtack saws, and pencils. Alright, so maybe Midge isn’t like every child out there.

A large sweeping motion will gather a full herd of bandies, while short and precise swipes can separate Bandies individually. Bandies can’t jump, so each puzzle becomes a trial of conserving as many Bandies as you can without leading them to an area where they become stuck.

Your main goal is to bring as many Bandies as possible to the goal, without suffering a painful school supplies-induced death. You’ll occasionally have to sacrifice one noble cardboard hero for the greater good of many others. It’s a bittersweet victory, but it definitely tests your management skills.

There are a few curveballs thrown your way as the game progresses, as well. Some lucky Bandies are bestowed with a tiny candle on their heads, which helps guide your fellow candle-less friends through dark areas. Weight-activated switches can create elevators, and miniature buzz saws allow Bandies to cut through the powerful restriction of Styrofoam walls.

If Band Together has anything together, it’s killer art direction. Following in a similar (but not identical) vein to the beautiful Little Big Planet, Band Together‘s nostalgia-inspired world is endearing. The merging of innocent materials with a comically dark overworld is a nice touch: reading through Midge’s part-curious, part-twisted personal journal is strangely fun. Needless to say, the game’s iPad 2 and beyond requirement is here for a reason. 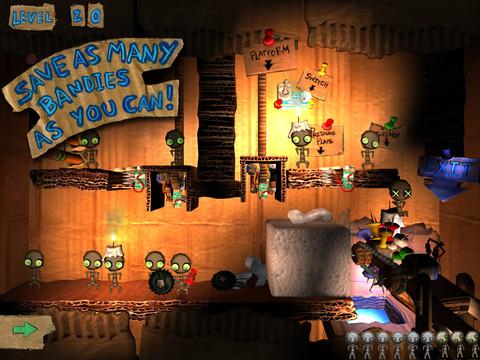 The downside? Band Together is all style, and very little substance. Beautiful retina display visuals or not, 30 stages is unacceptable for a game where most stages can be solved in one to two minutes. The slide-based gameplay is nothing to write home about, but it could be if there were more twists, puzzles, or contraptions. We’re looking at an hour of gameplay, tops.

The big question then remains: can a game hold up on a fantastic art style alone? In short, yes, but it’s definitely not something I can guarantee is worth a purchase. There are definitely some good ideas here, but there aren’t enough of the to boast Band Together over the hundreds of other iOS titles that look far worse (but play far better and longer).

If you’re looking for a game that pushes the display capability of your new iPad while simultaneously boasting a great visual style, Band Together is worth checking out. However, if you’re looking at engrossing gameplay that delivers in big amounts on a short amount of change, you’re probably better off investing elsewhere.