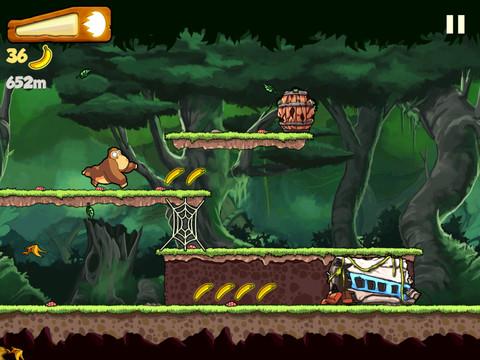 Banana Kong isn’t perfect, but playing it is a heck of a lot more fun than listening to the Donkey Kong Rap.

Gorillas have always loved their bananas, but what happens when the bananas say “no more?” You can find out with Banana Kong for iOS, a 2D endless running game that challenges you to run, run, run away from an ever-toppling pile of banana peels. Banana Kong doesn’t hit the lofty standards set by Rayman’s Jungle Run, but it’s still one of the genre’s top bananas thanks to slick controls, polished graphics, and tons of fun Donkey Kong Country references.

Banana Kong stars the titular Banana Kong, a gorilla who’s a bit obsessed with the golden fruit. One day his enormous stash begins to tumble, threatening Kong’s life—and the entirety of existence, if you want to get right down to it. This is one big pile, you see.

Kong begins to run, and if you know what’s good for both of you, you’ll see to it that he doesn’t stop. Unfortunately, there probably isn’t a corner of the world that’s safe from the Bananapocalypse, but don’t let that stop you from trying.

The running action in Banana Kong mostly takes place on a flat plane, but there are multiple platforms to navigate, as well as obstacles to dodge. What makes Banana Kong particularly fun is that you can collect bananas as you run (stationary bananas that are not trying to bury you alive, that is) and use them to juice up your power meter. Once it’s full, you can execute a shoulder-check that can break down barriers—but more importantly, you can open up secret exits and take the chase underground.

If the very idea of opening up secret passages to underground caverns makes you feel nostalgic, it’s because Banana Kong purposely pays tribute to Donkey Kong Country, the classic 16-bit platformer by Nintendo/Rare that’s packed with hidden bonus levels. In another nod to his heritage, Banana Kong can enlist the help of animal pals. He can jump on a warthog that’s capable of smashing anything in its path, and he can also grab onto a toucan to get a boost across croc-infested waters.

And like his cousin Donkey Kong, Banana Kong is also capable of swinging on vines. If you want a glimpse of the sun above the jungle canopy, try executing his shoulder-bash while he’s swinging!

Banana Kong is solid and clever, to say nothing of adorable. It’s still a pretty basic endless runner, however, even though the ability to run above the trees or underground adds a little extra depth. Otherwise, you’ve seen many of Banana Kong’s concepts before. You run on relatively uniform ground across randomly-generated levels, and when you inevitably smash into a rock wall, it’s back to start.

In fact, if Banana Kong can be fingered for one major flaw, it’s the game’s tendency to take any sense of progression away from you. You can buy utilities and power-ups, but most of them are only good for a single use, or barely seem to change the gameplay at all. You can pay for a magnet power-up that draws bananas to you, for example, but it rarely shows up. Worse, said power-ups require a ton of bananas to buy and upgrade. 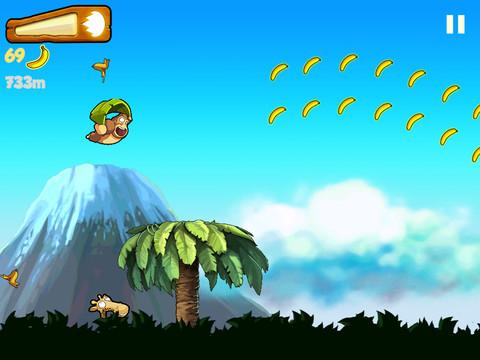 Don’t let the game’s stinginess scare you away, however. Banana Kong is a great-looking endless runner with a fun soundtrack and addictive “one more time!” gameplay. It might make you go (wait for it … wait for it) ape.