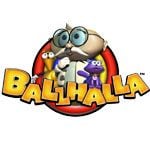 Ballhalla is absorbing. A unique twist on action-puzzlers, this ball-based game is all about "sucking up" surrounding energy balls to create heavier, more powerful spheres, while keeping their container balanced. The heavier the balls become, the more the "bucket" wants to tip to one side or the other. Append a time element and it adds up to one engrossing, frantically-paced, ball-loony experience.

Offering three modes of play, Adventure, Relax and Time Challenge, Ballhalla serves up 80 action-packed levels to complete, 16 trophies to acquire, 10 puzzles to solve and six special power-ups to employ. And, it’s all wrapped up in a story of mishap that involves a brilliant professor, a fearful robot and a reckless kitten.

Its tale, while nothing to go ballistic over, is one of science gone wrong. Professor Quark has created a matter transporter that opens portals to mysterious and distant lands. Unfortunately, when sending his mechanical friend, Proto, to capture these realms on film, Widget, his beloved cat, is accidentally transported, as well. Now, he must rescue them by piecing together photographic clues to their whereabouts and harnessing balls of energy to power their return.

As indicated, this action-oriented puzzler charges you with combining balls of energy to create heavier, more powerful versions, balancing unstable containers in the process. But, rather than merging balls of the same color, you need to absorb two or four neighboring balls of a different color, horizontally or vertically. Each time you do, the absorbing ball’s weight increases. And, the heavier it gets, the greater your score.

However, as balls increase in weight, they also cause the container to rotate. Thus, you need to preserve balance by creating balls of near equal weight on each side. If the bucket rotates too far one way or the other, and exceeds its balance range, you lose a life. Maintaining this "balancing act" makes for frenzied play, especially in Adventure and Time Challenge modes where you race the clock.

Moreover, as you create heavier and heavier energy balls, a Wiper sporadically crosses the screen, removing these balls and adding their power to an energy meter below. When the meter’s full, the level’s complete. But, not all balls get "wiped." When a ball reaches a weight of 10, it becomes a Megaball, at 20 a Gigaball and at 50 a Hyperball. These heavier spheres create additional energy, remain until a level’s end and enable a bonus level. By the way, levels can be replayed at any time.

Also, as you progress, the ability to create Blocks is added, a group of four same color balls in a 2×2 grid. Clicking on a Block instantly give each orb a weight of three. An Overdrive bonus becomes available, too, when at least four Megaballs are in play. Press the appropriate button and 2x Overdrive multiplies points by a factor of two. If seven or more Megaballs are present, 4x Overdrive increases multiplication by four.

In addition to absorbing balls, you also encounter 10 interspersed photo-based puzzles that continue the storyline. Completing each normal level awards you with several square puzzle pieces. When enough are collected, you’re tasked with putting them in their correct order on a 4×4 grid. These puzzles, however, are not of the traditional jigsaw variety. Instead, they more closely resemble the sliding tile puzzles of old. You shift the pieces, which drop from the top when moved, so that they fall into their correct position on the grid. Plus, some puzzles require you to rotate the pieces, as well, which can be quite tricky.

Of course, bonuses are available. Included are the 5x Score Bonus, increasing your score five times at the next Wiper pass; Brakes, to prevent tilting for 20 seconds; Extra Life, awarding an extra life;ï¿¼500 Score Bonus, that adds an additional 500 points; and Illumination, revealing all possible matches for 20 seconds. Conversely, Obstacles prevent balls above them from falling, un-absorbable Lead Balls simply get in the way, and Time Bombs explode.

In Ballhalla‘s favor, it offers wonderful visuals and sound effects, an addictive level of immersion, three game variations and a really distinct arcade twist. It’s a blast to play, especially when you move into Overdrive. But, tilting toward the downside, play becomes quite frantic at times, especially for the less coordinated; puzzles that require piece rotation can be troublesome given allotted time; and the storyline leans toward the weak end of the scale.

Regardless, the game’s a winner, a great break from the norm and a very addictive experience overall. Expect much ballyhoo over Ballhalla!