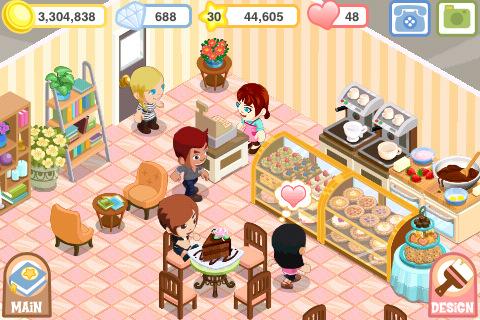 We’d like to think that, in any given genre, there are an infinite number of ideas worth exploring. It would seem that TeamLava doesn’t share in that sentiment. For the second release in a row, this powerhouse portable social developer is offering up little more than a re-skin of an earlier title – but unlike the dismal Empire Story (an Roman re-imagining of their earlier City Story) Bakery Story manages to be just as much fun as its predecessor.

If you’ve had the chance to play TeamLava’s restaurant management sim Restaurant Story, you’re going to be intimately familiar with what’s on offer here. Despite the different name, Bakery Story is quite literally the exact same game. The only thing that sets these two releases apart is the style of food that’s being prepared and the decorations you’ll adorn your shop with. In a different age on a different platform, we might have been tempted to call this an expansion pack rather than a full-on standalone release. But this isn’t a different age, nor is it a different platform, so instead we’re delivered with two completely different titles on the App Store that happen to look and play exactly the same.

Still – this isn’t necessarily a complaint. Everything that we enjoyed about Restaurant Story has survived the transition, which is more than we can say for TeamLava’s previous re-skinning debacle (see our Empire Story review). All the typical trappings of the restaurant genre are here. Players will need to choose a recipe, tap on the ingredients to start baking, return after a set amount of time to serve it, and watch the customers pour in to eat up their tasty treats.

Rather than tacos and tenderloins, players will get to choose from a variety of cakes, tarts, pies, and other delicious delectables. Likewise, bakery appropriate decorations like cake and pie displays are available to players who take pride in customizing their location’s appearance.

Despite enjoying this offering as much as we did Restaurant Story, there’s also something to be said for change (which Bakery Story is clearly lacking). There are two paths TeamLava could have followed if they had really wanted to wow us; they could have either stuck with an existing formula and improved upon it, or they could have gone out on a limb and tried something new. Bakery Story does neither of these things. 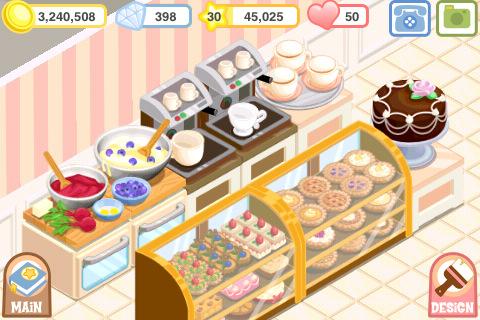 Improving on an existing formula would have probably been the easiest route to go, and that doesn’t even require anything drastic. For example – they could have left the gameplay untouched and instead focused on improving their frustrating social structure. The Storm8 network isn’t the easiest to manage, doesn’t allow players to start a game on one device and continue it on another, and doesn’t let gamers play offline. Banging out a new game that’s little more than a fresh coat of paint on an existing product should have given them more than enough time to fix any one of these complaints, but clearly addressing these concerns isn’t as high on their priority list as banging out new products.

Bakery Story is a fine extension of an already great experience – we just would have liked to have seen something other than what’s come before. Still, if you’re a fan of restaurant games, Restaurant Story, or social gaming in general, Bakery Story is a tasty good time that you can snack on free of charge.

Scarlett and the Spark of Life Review