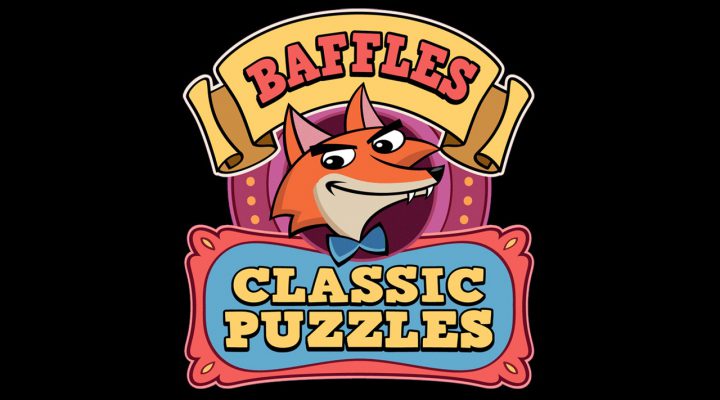 A huge variety of puzzles, with almost every type of logic challenge or brain teaser represented.

Puzzle histories add an interesting and educational twist to the experience.

Controls are finicky and awkward, making navigating the menu or actually completing many puzzles very difficult.

Menu layout is extremely inconvenient, with no way to sort puzzles or access histories outside of individual stages.

Puzzle aims are often hidden on a separate menu, requiring frequent back-and-forth for a reminder of the current goal.

Chicken currency rewards don't meet puzzle unlock requirements: this leaves you without extra chickens for hints and forces you to either watch repeated video ads or spend cash to progress.

Aesthetically dull and stylistically confusing, with a childish appearance but puzzles that will be difficult for most adults.

There’s no shortage of puzzle games in the App Store, and multi-million dollar ongoing series like The Room prove there’s always space for more. However, as Baffles Classic Puzzles co-creator Dugald Keith recognizes, most apps choose one type of puzzle and offer that variation in excess, whether it’s sliding block, Arukone, knight’s tour, or any of the thousands of other mental excursions out there. Baffles aims to offer a wider assortment of these puzzle types in one place, providing “the most comprehensive and varied collection of puzzles ever released in a mobile app.” While Keith and team can proudly proclaim they’ve met this admirable goal, it’s unfortunately at the expense of a number of other critical features. 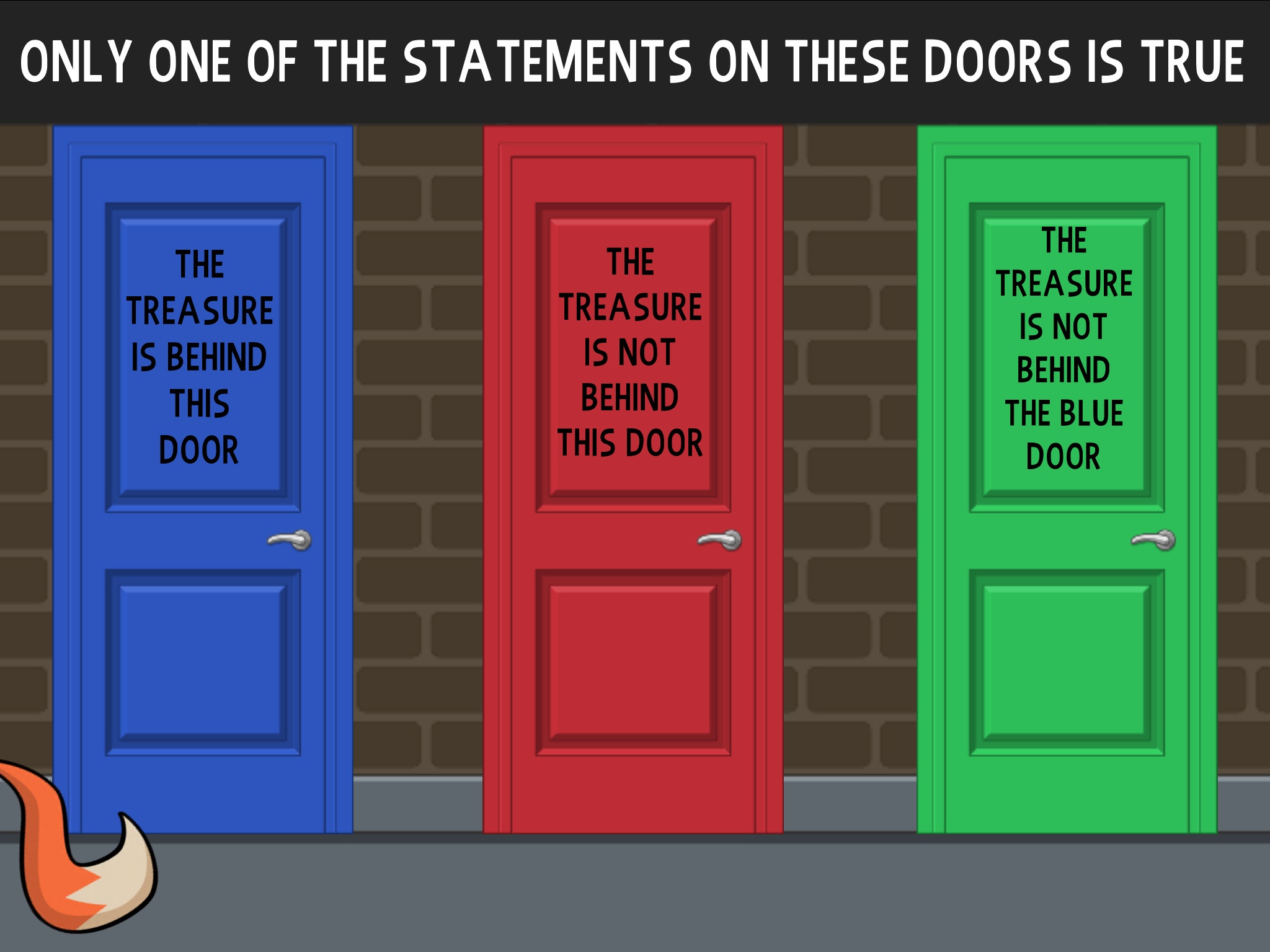 A compendium of logic puzzles and brain teasers may first bring to mind images of Professor Layton, but Baffles Classic Puzzles is strictly a puzzle collective. It doesn’t tie its offerings together with a murder mystery or dialogue with quaint townsfolk; its only overarching feature is Baffles the puzzle-loving fox, who provides info and hints on each standalone challenge. The types of puzzles you’ll find here are very Layton-esque, however, and fans of lateral thinking and other riddle-like trials will be more than able to scratch that specific brain itch.

It’s to Baffles’ credit that listing all the types of puzzles available here would be an exhausting endeavor. To name just a few, players will be challenged by: peg solitaire; the Rubik’s Cube-inspired color wheel; river crossing riddles; balance measurement equations; text-response brain teasers; sliding block puzzles; and dozens of others that don’t always have simple names, but you’d probably recognize upon encounter (like the “Knights and Knaves” test made famous in the film Labyrinth). Unless you hate puzzles in general, there’s almost certainly something you’ll enjoy here.

When you first start the game, you’ll only have access to three puzzles. Completing a puzzle will earn you a certain amount of chickens, the game’s currency. As you earn chickens, new batches of puzzles will become available (usually in sets of three to five) at certain chicken thresholds, allowing you to play and earn more. The puzzles that unlock together are usually varied, so you won’t get stuck with three riddles at the same time, which makes it easier to jump around for a break if you’re stuck on something.

The chickens you earn to unlock puzzles are also used to buy hints as needed. Hints are generally fairly priced and won’t cost more than the puzzle will award in total, but consistently buying hints makes it much harder to unlock new puzzles, as you’ll be depleting your chicken count. 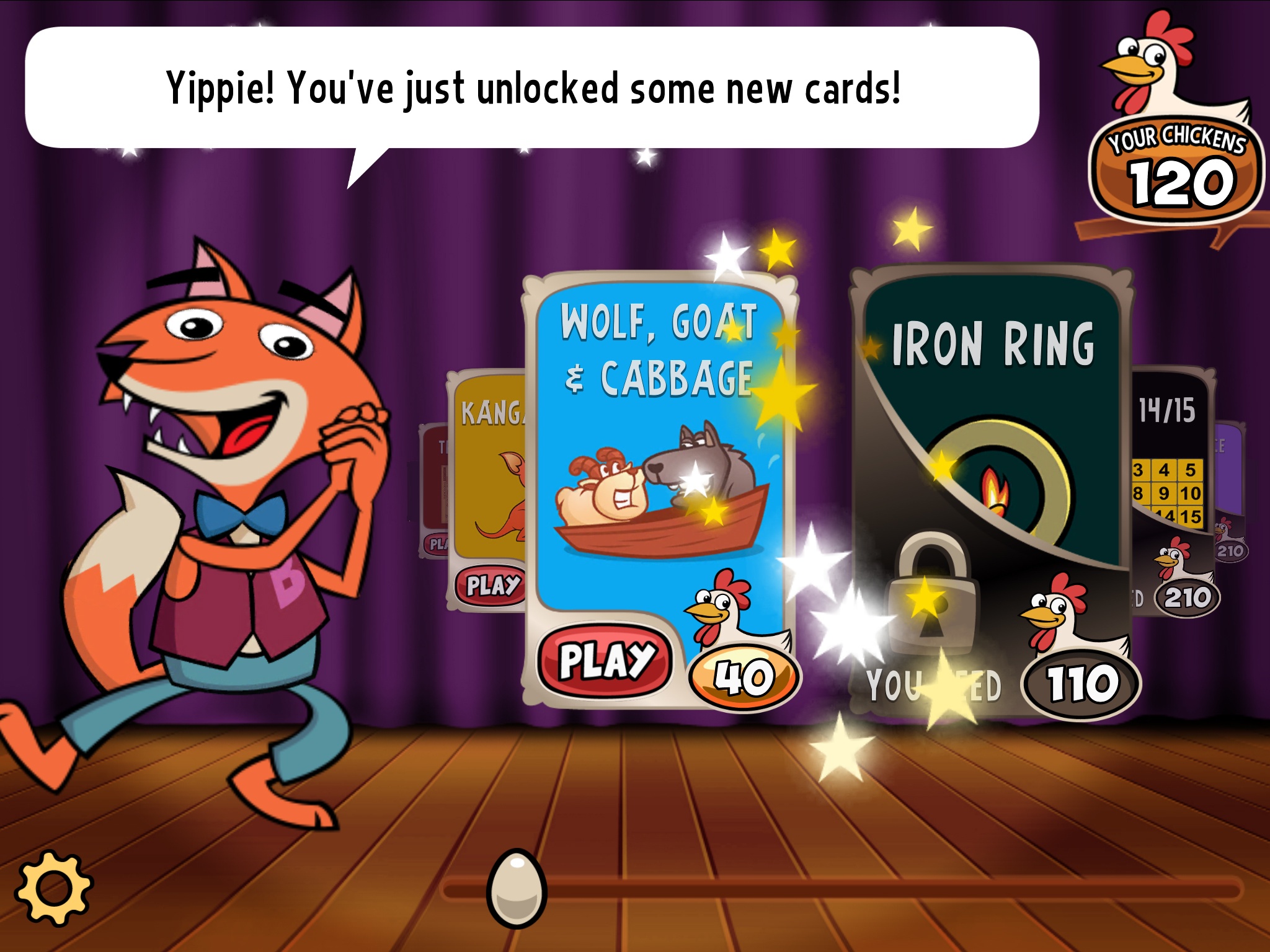 Although Baffles claims you can buy hints and unlock new puzzles freely, this is really only true for the first few sets: eventually, unlocks will cost more than the puzzles themselves will even award, meaning you can avoid purchasing a single hint and you’ll still come up short. For instance, we hit 790 chickens and unlocked three new puzzles. The next set of puzzles required 940 chickens to unlock, but the three we’d just reached only awarded a total of 120 if we completed them. That left us 30 chickens short of the next group, even without spending chickens on hints.

You can watch video ads to earn more chickens or buy them outright, but Baffles’ video reward system is a bit of a crapshoot. It sometimes awards 20 chickens per video (a reasonable amount, as we needed 30 in the above example), but it just as often awards only two. Which you’ll get seems random, and two chickens per 30-second video is really not worth it. 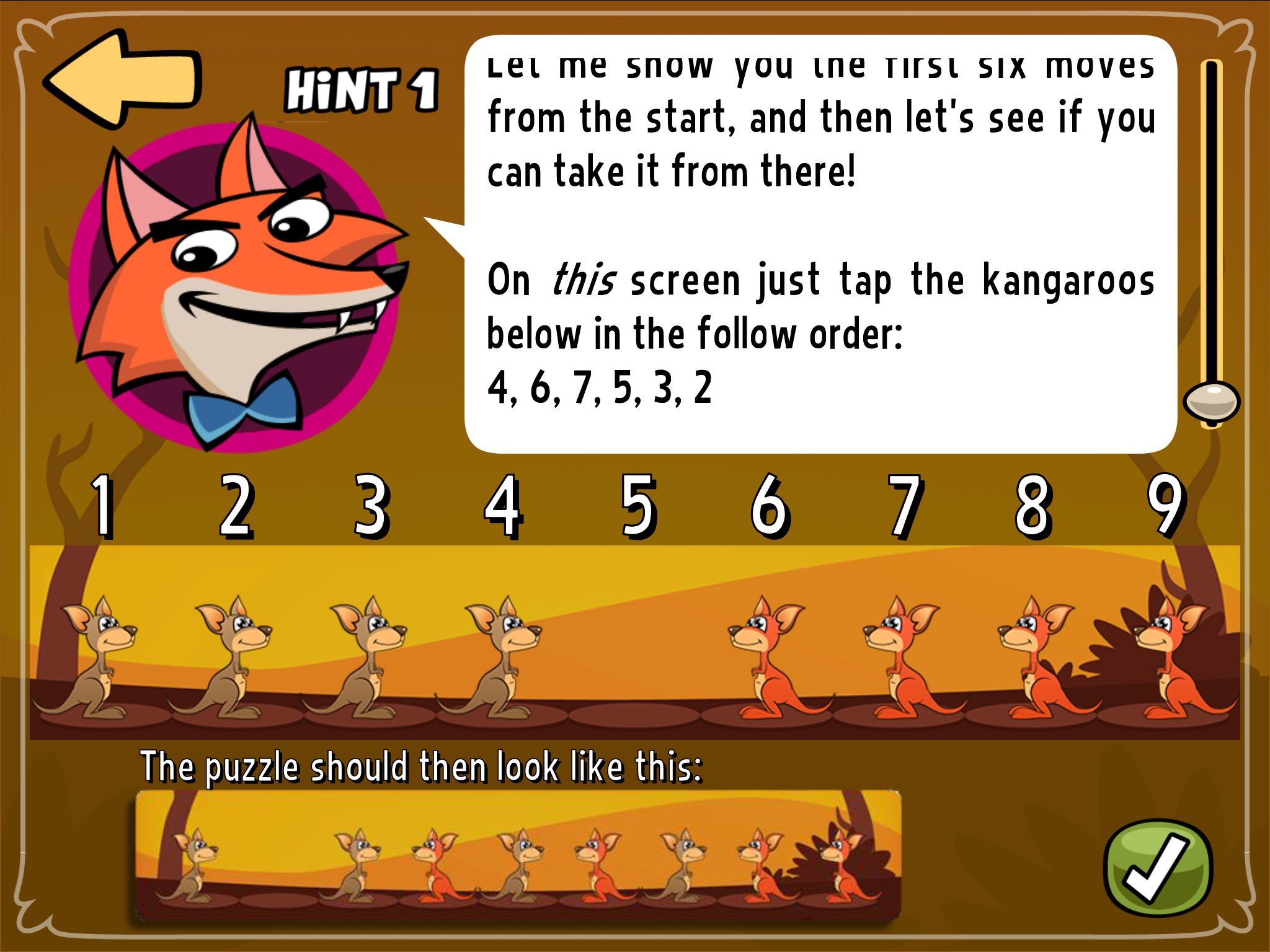 When you can afford to feed Baffles chickens in exchange for hints, the hint system is surprisingly helpful. As expected for this genre, there will inevitably be some challenges that leave you hopelessly stumped. The majority of puzzles provide multiple hints before offering the answer outright, allowing you a chance to figure it out mostly on your own, or throw in the towel completely if you just want to move on. We never ran into any “Just think about it!” type hints that you’ll occasionally see in games like Layton (and which are beyond frustrating)—if a puzzle in Baffles offers a hint, it will actually provide some value. 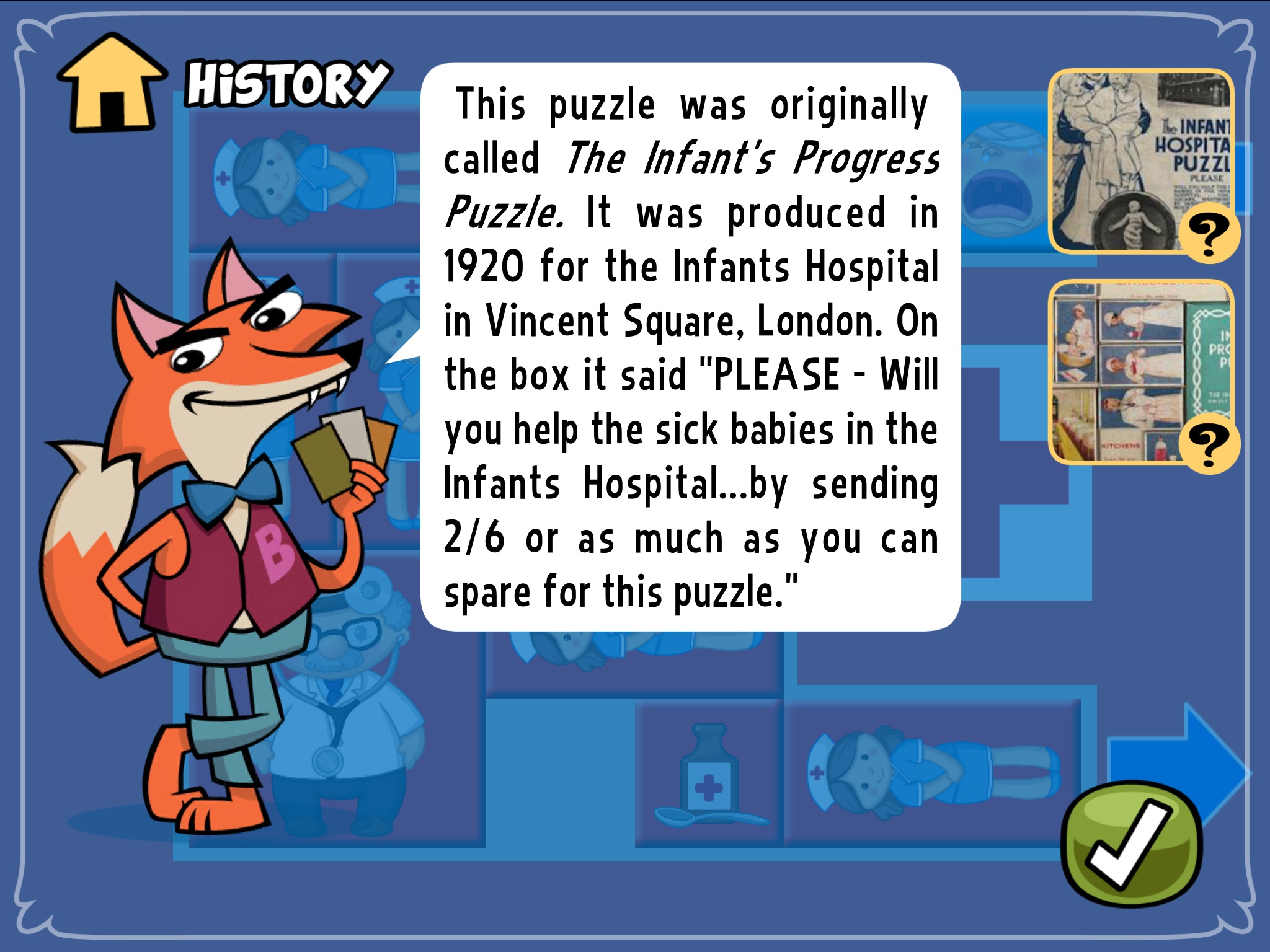 The other consistently appealing feature is the history lesson included with most puzzles. While working on a puzzle, you can stop to read a short bio about its origins and other interesting details, like info on its creator, famous places it was played, and even random bits of trivia like it “was featured in the action movie Die Hard 3.” Many of the puzzle histories even include photos of their original iterations, creating a mini-encyclopedia of puzzles within the playable compendium.

Unfortunately, what is mostly a great set of ideas for puzzle fans often falls short in its actual execution. For starters, the app itself runs poorly, with finicky touch controls and random stuttering in the middle of text displays. Every time Baffles explains a puzzle, the game will pause for a few seconds mid-sentence before writing out the rest. The scroll bar used to access puzzles jumps around at the slightest movement, making it extremely difficult to just scroll to the item you wish to play. 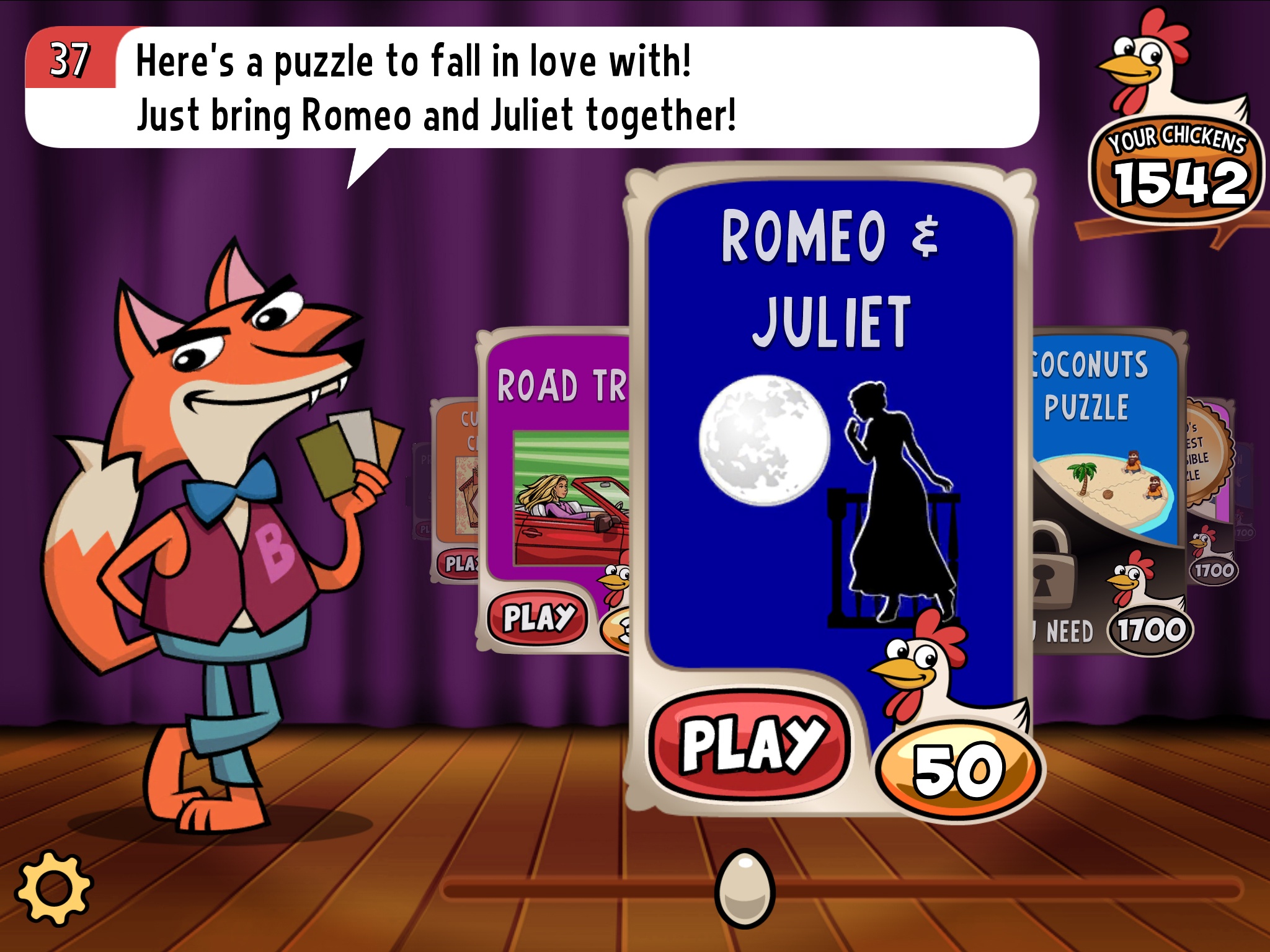 The layout of the puzzle menu itself is frustratingly linear, with each puzzle listed individually in a basically endless row. This means to get to puzzle #50 from #1, you’ll have to scroll (or try to) all the way through the other 49. A tile-based layout, or even multiple layout options—like sorting by category, difficulty, completed, etc.—would have been much more user-friendly and sensible. In addition, you can only access the entertaining histories from within the individual puzzles themselves, meaning a long slog through a lot of menus if you’re just in a learning mood.

The touch control issues extend to the puzzles themselves, making any that require precise dragging or item rotation unnecessarily difficult. On one path-drawing puzzle, every time I placed my finger on the screen to draw a line, it started the line two inches above where I touched, requiring me to erase and start over. A horse puzzle that required delicate placement of pieces would either not move at a slight touch or jump halfway across the screen at a moderate touch. 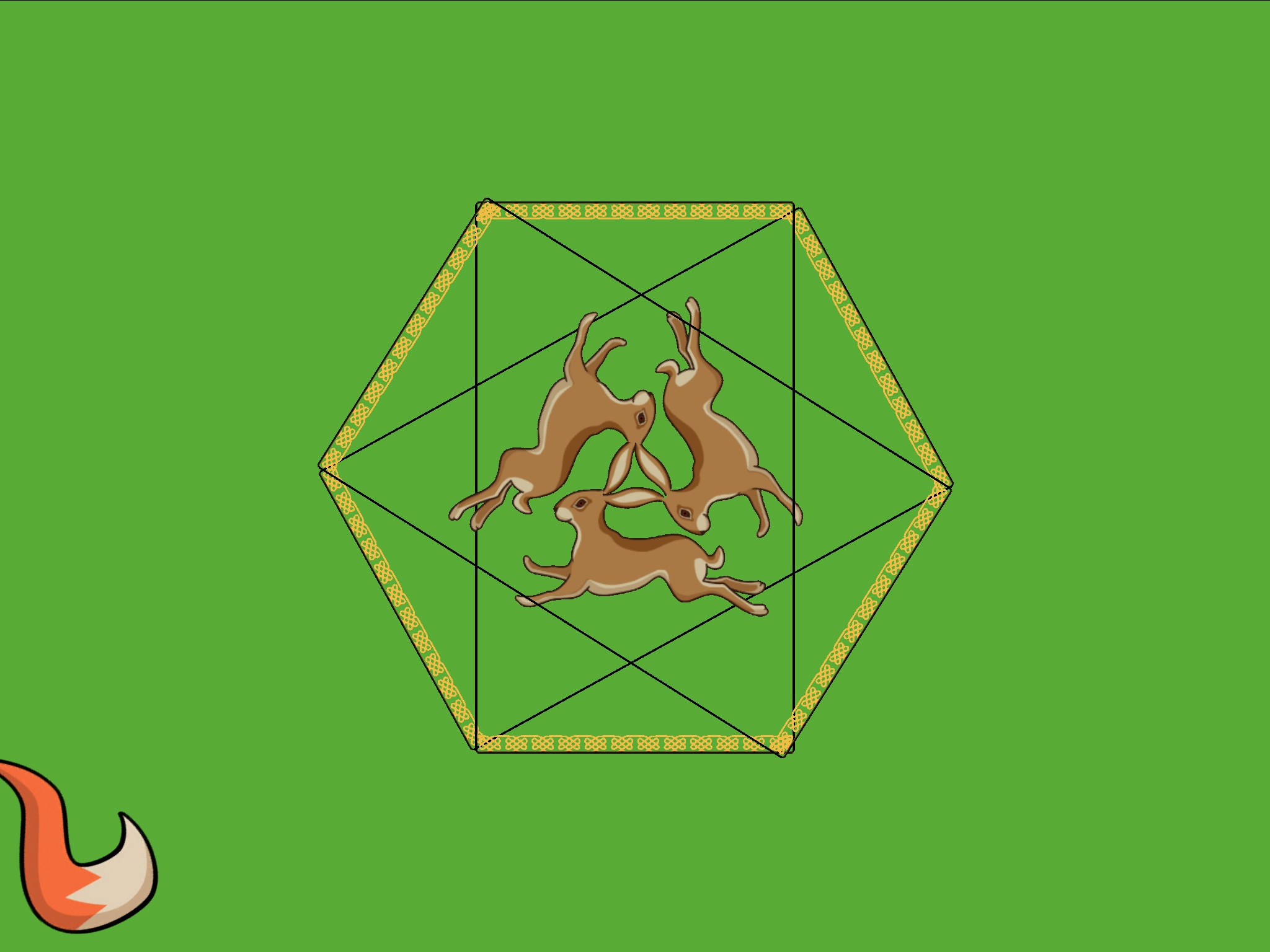 These placement puzzles and some others also suffer from overly exact requirements. On a puzzle I was genuinely enjoying until the end, three rabbit cards needed to be arranged so all rabbits had two ears. I arranged the cards correctly, but because they were not in the exact pixel-perfect location, the game never accepted my solution. A lateral thinking puzzle which required the answer “window cleaner” did not accept the answer “window washer.” I finally got the above-mentioned horse puzzle to be accepted, but only after 10 minutes of painstakingly light movements to slide the pieces about a millimeter closer and into the “correct” position.

Despite the useful hint system, the game itself seems to be working against you at other times. While working on an accelerometer-based dexterity puzzle, during which I needed to turn the iPad at the exact right second, a reminder about the social sharing option popped up and blocked the entire screen. And on less time sensitive puzzles that have their own failure states, the game does not inform you if you’ve hit a dead end: for instance, on a peg solitaire challenge, I ended up with three pegs nowhere near each other, but had to manually enter the menu and restart the challenge. On peg solitaire it’s easy to know when you’ve made a game-ending mistake, but this lack of feedback on puzzles is another critical area that seems unfortunately overlooked. 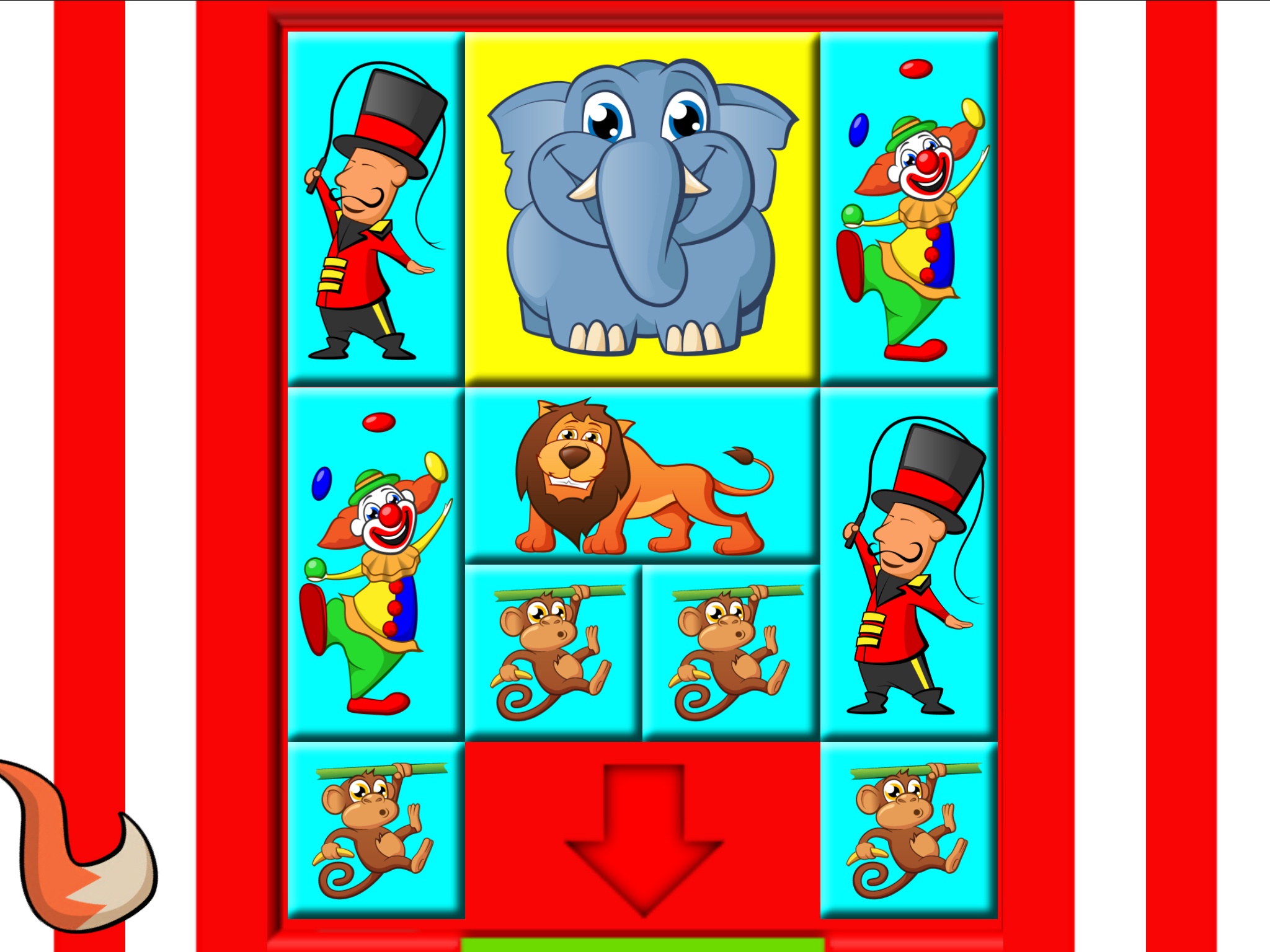 Finally, even the appearance of the app is uninviting, with extremely simplified graphics that feel dated and not cohesive. The overly bright colors and lack of detail make this look like a game for preschoolers, but the puzzles themselves are far too difficult for children to complete alone. Baffles himself is cute with an animated cartoon style, but the bulk of the puzzles feel like a mishmash of Highlights Magazine one-offs and ‘90s clipart. The theme song, while catchy, is the only tune in the entire game, so you’ll be hearing it on the menu and in every single puzzle until you inevitably hit the mute button. With Adrian Moore of the highly atmospheric Framed as a co-creator, it’s disappointing that Baffles as a whole is lacking any distinct or interesting style.

Baffles Classic Puzzles is built on a number of strong ideas: a widely varied collection of logic and lateral thinking teasers is the perfect fit for the puzzle-loving and pick-up-and-play mobile market. The included histories provide unique backstories and facts that are both educational and entertaining. And the hint system is one of the more gradual and fair ones we’ve seen in this genre. However, with its current control and layout issues, lopsided chicken rewards, and general lack of polish, Baffles doesn’t fulfill the potential set up by its premise. The act of playing feels like a riddle itself; we’re going to need more hints before we can move on with this one.