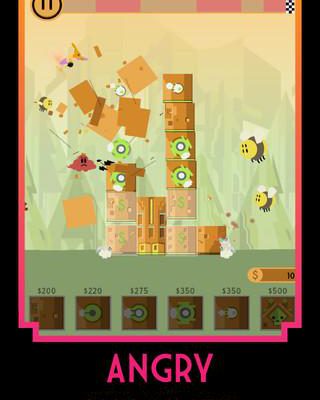 As far as titles go, Bad Hotel definitely doesn’t lie. The team at Lucky Frame have provided one rotten set of accommodations. The architecture doesn’t make sense, there’s music playing all the time, and the building is constantly being attacked! I suppose I shouldn’t be too hard on them, though: as a game, Bad Hotel is pretty wonderful.

Set in an alter-Texas that looks like it came straight off a neon Monopoly board, Bad Hotel puts you in the shaking boots of a beleaguered, unnamed entrepreneur looking to run the  region’s best place to stay. The only problem? You’re in Tarnation Tadstock’s territory son, and he’s got insurance money he wants to collect on this here hotel. And just like any crazy rich person, he comes armed with a fleet of sentient clouds, evil birds, and massive crustaceans to help him. Now I know what you’re thinking, and no, I can’t explain how any of this makes sense. But if you were really thinking something along the lines of “how does this whole thing play?” I’ve got you covered there.

True to its absurdist premise, Bad Hotel doesn’t play quite like anything you’ve ever experienced before. With that said, however, it takes a page out of a few familiar genres’ playbooks on the way to brave new territory. Here, it’s the unlikely pairing of tower defence and rhythm that find themselves in Lucky Frame’s particle accelerator. And the explosion is delightful. 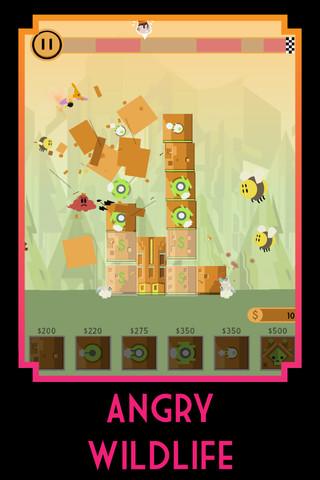 In each level, add to your base hotel using rooms ranging from regular suites to enemy-freezing ice machine rooms, to dangerous turret stations to hospital hubs that heal your structures. For every room placed on the stage, different notes and chords pulsate, turning your growing hotel into a gradually assembling mini-opus. (I’d ask what kind of hotel this character was running, but at this point, the title has it covered.)

There are no limits on the placement of rooms, except that they need to be touching another block in some way, whether above ground or under it. Stage by stage, enemies – including massive bosses – attack from the top and sides of the playing field, and it’s your job to conduct an orchestra and build a hotel fit enough to ward them off. And for the most part, Lucky Frame walks the razor edge deftly, marrying both their far out concepts into one audacious, well-oiled package.

As a tower defence title, Bad Hotel is a breath of fresh air, innovating on the structured path formula to deliver something altogether more exciting. With enemy waves  inbound from multiple directions at once,  focus switches from the towers you’re building to the hotel you desperately need to defend. In this way, the game arguably revisits the “castle crasher” roots of the genre, but faced with a slew of path-driven titles, you’ll be surprised at how high-stakes it feels to be preoccupied with a “base” again in such a central way. Moreover, synergy between pieces is wonderfully strategic, and demands a lot more than simple “spray and pray” tactics. 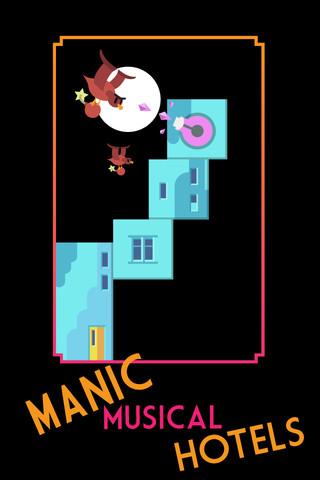 Bad Hotel abandons the time-tested concept that money and resources come from the enemies you defeat, instead harkening to Monopoly once more by shelling out cash gradually for your base hotel, and each standard suite on the field. The catch? None of these things contain any sort of offence, meaning you have to defend them with hospital rooms, supplement them with turrets, or sit there and watch them take the brunt of your damage.

In this way, each level becomes a strategic interplay of either building what you need to keep your purse topped up, betting all your chips on early offence while your hotel rakes in cash slowly, or – more smartly – finding that subtle mixture between the two. A lot of tower defence games talk big about how items and towers work together, but Bad Hotel immerses you in the satisfying meta-play of each structure.

And then there’s that whole “rhythm” influence. Besides a back beat – whether its a long, droning hum, or a bass-filled thump, the game is soundless. Except it’s so very not! More than simply building blocks for your towers, each room emits a note, chord, or tone distinct not only to its class, but to the order in which you add it to the stage. For example, stacking your hotel with  four cash-delivering suites doesn’t cause an annoying chorus of identical notes, but instead a quartet of ascending “dings” that are styled in one of a variety of genres – whether it be jazz, techno, or bluegrass. 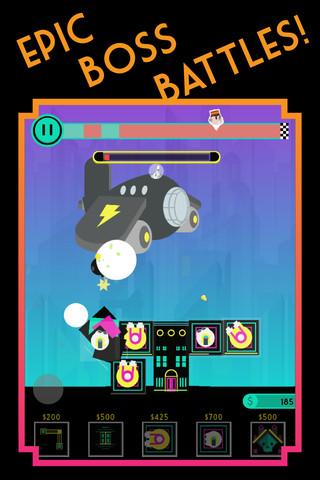 As you experiment and craft your master tower, so too do you fill the stage with strangely addictive songs you’ve conducted yourself. And while perhaps grating at first out of sheer uncommonness, I very quickly found myself letting the music dictate how I built my hotel, humming along to these new hit songs I’d made. And in a true stroke of genius, I would argue Lucky Frame has made the game fully backwards compatible here: if you follow the music alone, towers that provide complementary sounds to one another actually manage to form strategically sound setups as well. As an added bonus, there’s nothing more soul-crushing than hearing your opus diffuse into the few measly tones that once it was, giving the game a real sense of mounting exciting and crashing agony as you rise and fall from tower defence grace.

Ultimately, though, Lucky Frame doesn’t have that last part to worry about. While the game feels devilishly difficult to the point of nigh-impossibility at times, eeking out your wins always manages to prove a method to Bad Hotel’s madness. And despite the occasional crash here and there, Lucky Frame have delivered on too cool a concept for that to matter. Like the songs you compose, and the hotel you build  into the clouds, Bad Hotel is an example of making something magical from nothing at all.