Backyard Monsters may be the most polished strategy game available for Facebook.

Facebook games thrive on the simplest gameplay conceits. Most of Zynga’s oeuvre amounts to clicking tiles. Text RPGs are simple stat-raising exercises. Action games usually involve repeating a single, often silly, action. A game like Backyard Monsters seems completely anomalous in this environment, offering a blend of grand strategy and monster breeding. You can be attacked by wild monsters or, once you’ve reached a certain point, other players. You can also attack other players yourself. That’s a pretty far cry from Café World.

Backyard Monsters is a game that really works, though, because it boils an often-complicated genre down to its simplest, most fun basics. You begin by building a little town for your monsters, trying to design it so that essential buildings are protected by defensive turrets. There are four types of essential resource to produce, a town hall, facilities for making your own monster army, and storage buildings you need to hold all of our building materials. If you design your town correctly, your defenses will cut invading monsters to piece before they can do much damage. If you mess up, then your buildings get damaged and you can lose resources.

Moving buildings around is easy enough, thanks in large part to how smoothly the game runs. Most Facebook games with graphics that are complicated at all experience intermittent problems with lag and disconnects, but Backyard Monsters always worked smoothly during the test period. The game does disconnect you after you’ve idled for too long, which may be how the server stays so stable and avoids problems like memory leaks. You’ll be able to do a lot of experimenting with your town’s layout, all of it largely headache-free. 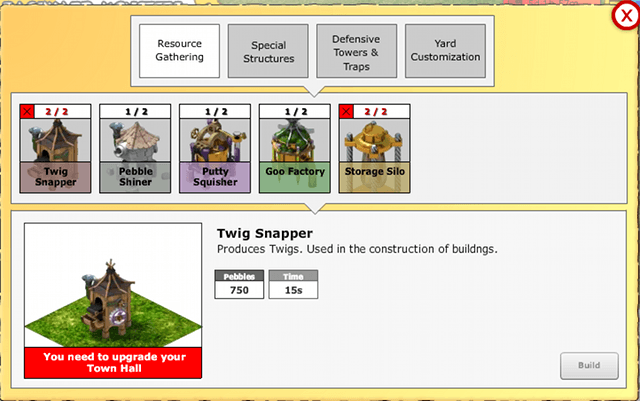 A lot of Facebook games try to be funny or at least quirky, but frequently these attempts at humor fail and render the game more irritating. Backyard Monsters deserves praise for being the rare quirky game that’s actually funny and amusing. The game’s cash-based virtual currency is called Shiny, purely so the game’s interface can encourage players to Get More Shiny. Monsters have silly designs and make curious grunts and squeaks. Resources fly into your silo with cartoon “fwee!” sounds. Even the notice that lets you know you’ve been disconnected from the server is amusing. 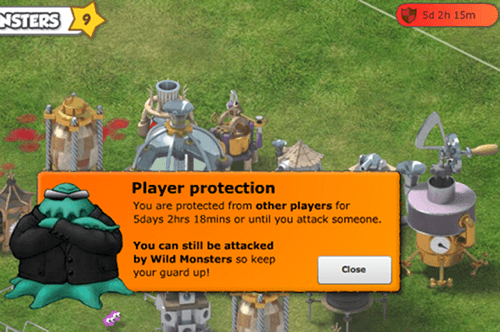 Backyard Monsters is a good game. This shouldn’t surprise anyone familiar with Casual Collective’s track record as a publisher, but it’s still surprising given how far above and beyond expectations the game goes relative to the Facebook platform. Backyard Monsters plays better and looks better than Nintendo DS games sold at retail. To release a game of this caliber for free on Facebook is a real achievement.