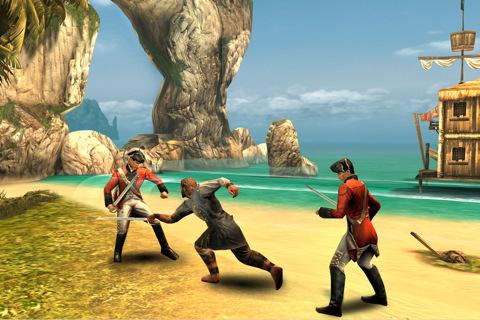 Assassins of the Caribbean would’ve been a perfect title for Backstab. In case you need it spelled out for you, that’s because it’s a mash-up of Assassin’s Creed gameplay set in a world plucked right out of the Pirates of the Caribbean movie universe. It’s a mix that sounds like a pure winner, but some functional issues just make it…. eh.

But before I tell you what’s wrong with Backstab, let’s talk about what’s right about it. First and foremost is the setting of the game. While pirates are big business, they just haven’t really cracked into the videogame world that much. Running around the Caribbean dealing with huge galleons and invading Spaniards is surprisingly refreshing.

The storyline is, well… it’s out there. Like, really out there. It starts off as a standard revenge story, then just makes a hard left out of nowhere and bounds off into Crazytown. I for one actually like this just because it was so bizarre, but I could see if being a turnoff to some people. Luckily the story, like it or not, never impacts the game’s playability.

The setting is enhanced by making it an open world type game, where you have a mission to do but can explore on your way, or ignore it and go searching for interesting side missions. You’ll encounter various NPC’s as you move about the city and these little side missions definitely help to flesh out the various locales. In short there are a TON of things to do in each location, and that provides most of the fun to be had in the game.

Backstab definitely tried to take its gameplay cues from Assassin’s Creed, which means a lot of parkour free-running elements. Climbing buildings, jumping from rooftop to rooftop – all that jazz. Just like in the Assassin’s games it’s just a good time running up to a building and then just being able to climb it.

In addition to the parkour cues, Backstab also seems to have taken the combat elements from those games too, and here is where it starts to fall apart a bit. The bottom of the screen has the typical virtual controls for the swordfighting, jumping and shooting on the right side and movement on the left. Tapping and dragging the top of the screen moves the camera. This is too much for the small iPhone screen, and I stuck to the iPad for that very reason. 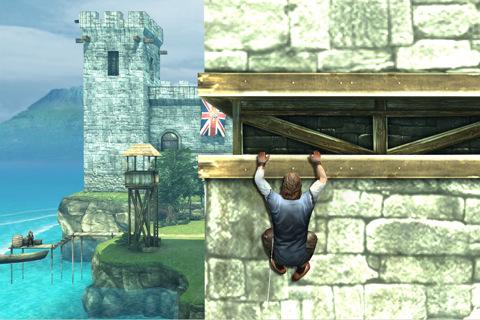 Since you have to control the camera yourself 100% of the time, sometimes you’re left running into blindspots and triggering moves or climbs you didn’t want. Actually, this happens constantly. If you’re using one thumb to control movement, and one to shoot and jump, how am I supposed to ALSO control the camera?

Maybe it’s asking too much, but in an open world game in a city there are literally hundreds of walls, buildings and other obstacles that could trap the camera or put you in a blindspot – and without at least a camera that does some of the heavy lifting, it’s just a constant chore.

The voice acting is fine, but not enough to impress. And the graphics, while decent, aren’t going to ever look like anything other than a mobile game. While the gameplay has flashes of fun, it’s never long before you run into something you didn’t see or you run to the edge of a building, and instead of jumping your character just stops cold.

I appreciate the whole “open world with lots of stuff to do” thing – I really do. It’s ambitious to say the least. But I think to a large extent the game’s engine gets in its own way far too often. There were numerous times I saw characters get stuck or fall through the ground, or mission objectives simply not appear. One time the ships I was supposed to shoot with a cannon just didn’t load, and I eventually lost the mission because I didn’t stop them. These events were too frequent to chalk up to a fluke, and began to tarnish the overall experience.