Home / Reviews / Back to the Future: The Game, Episode 3 – Citizen Brown Review

Back to the Future: The Game, Episode 3 – Citizen Brown Review 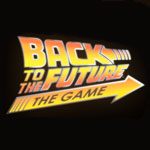 Third Back to the Future episode doesn’t stand alone very well, but sets the stage for things to come

Back to the Future Episode 3: Citizen Brown is a tough title to review. Taken on its own, it’s a shallow, almost meaningless game. In the greater fabric of the quintilogy, it serves its purpose as a bridge, the dip of the story arc. Not a great place to be, but it’s obviously setting up exciting things to come.

At the end of second episode, Marty returns to the present (well, 1986, so his “present”) to find that the town of Hill Valley is no longer the placid small America town it was before. Instead, it’s now gated, with a giant billboard featuring a different-looking “First Citizen” Brown looking authoritative in a 1984 kind of way. A loudspeaker preaches the town’s new slogan: “Relax. We have everything under control.” It’s up to Marty to find out what went wrong, and try to fix even more damage to the current timeline.

Obviously, Back to the Future Episode 3: Citizen Brown features the same graphics, sounds and acting as the other titles. That is to say, it’s excellent. Christpher Lloyd – though woefully underused here – finally starts sounding like the energetic actor we know he is. A.J. LoCascio’s Marty just gets better and better. Unfortunately, the weakest cast member is the voice of Edna Strickland. She is set up to be the antagonist for this portion of the story, but ultimately delivers a flat, non-threatening performance.

The overall plot is nicely padded and advanced, making references to actions you took during previous playthroughs of the earlier episodes. Finally, there’s also some talk of Doc Brown’s two sons and wife. They hadn’t been mentioned before, so it’s good to know that the writers are starting to tie these episodes into the films’ canon.

With all this talk about the game as if it were a movie, it should come as little surprise to hear that Back to the Future Episode 3: Citizen Brown has extremely few puzzles to speak of. Most of the time, you’re walking around, talking with various people to find out what’s going on in the town and how to gain an audience with its new bizarro leader. The few puzzles that are there are either short setpieces (like tracking a dog using spraypaint along a plank to make its pawprints visible, or a back-alley guitar battle) or simple click-here-to-proceed affairs.

The town of Hill Valley is frighteningly empty. Nobody walks the streets, and you can count the number of characters you encounter without hitting double-digits. Granted, the atmosphere is supposed to be cold and desolate, but it doesn’t make for a fun game.

Again, it’s a tough one here. Let’s face it: You’re not playing Back to the Future Episode 3: Citizen Brown on its own without playing it in context. Looking at it in terms of the other two episodes, it’s definitely the weakest thus far. However, being stuck in the middle, it does help add to what’s already there, and gives some glimmers of hope for the upcoming two episodes.

Puzzle of the Dead Review