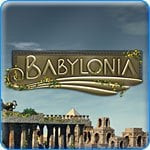 When playing a game, it’s sad that, in spite of solid efforts from a developer, the word that first leaps to mind is formulaic. Babylonia, while well-crafted, has a big case of the "me-toos." It’s a shame, because there are some interesting ideas in the game, but not enough to make it really stand out.

Essentially your basic match-three tile game, Babylonia has you rebuilding the fabled Hanging Gardens of Babylon to please the goddess Ishtar. By playing the game, you gain resources including flowers and different coins, which are used to rebuild the gardens piece by piece.

The game is easy to start. Pick timed or untimed mode. Make matches of three tiles by swapping, some tiles require more than one chain to clear them, some icons are locked, some tiles need a chain to happen beside them before they open up… Again, it’s all very familiar. The only gameplay variation seems to be the addition of a relic that appears at the top of the screen once you’ve removed all the blue-backed tiles. If you can drop it to the bottom before the timer runs out (or in the case of untimed, just get it there) you get a bonus.

Resources are earned, and the building game commences. Matching four tiles makes a wild-card icon, and matching five tiles creates a helix that clears a whole row. If you can get the helix to collide with a second one, the column the second helix sits in gets cleared.

There are multiple spells with multiple levels, mostly for clearing tiles. Spells can be cast by using mana that is collected during gameplay – again, icons appear and need to be clicked. There’s a spell for stopping the timer for various lengths, but in the untimed mode, it’s kind of pointless. But the kicker is you can’t unlock higher levels of spells until every level one spell is purchased. It’s a bit of a waste. The most important item at the shop is the chest which allows a greater amount of blooms to be collected.

Finally, there’s the hammer, which can be powered up to clear a single tile, a blue/locked tile, or every like-tile.

If it sounds familiar, it’s because you’ve definitely seen this idea before. For example, Flower Paradise eschewed the myths and just got straight to the garden creation. Both Hidden Wonders of the Depths games change the theme from garden to demanding mermaid, but the gist is the same.

It’s not so much that the idea of building something is stale, but the methods are. During the garden-building sequences, there is a little bit of resource management in keeping the flowers watered and free of pests. It’s a little too easy, as the water and pest-killer is either given away during levels as icons that appear that need to be clicked, or can be purchased at the game’s shop for such a low price that you won’t ever be in a bind.

The reason to tend the flowers is because the goddess Ishtar is a little bit demanding. Okay, a LOT demanding. The point of planting flowers is to build up a Joy meter at the top, and if you should fail Ishtar, she’ll smack half your Joy bar away. Sometimes, it is done inexplicably. In spite of tending to all the flowers, and planting new ones, Ishtar decided to be angry anyway, and wiped away four or five levels of progress.

The Joy meter ultimately is pointless. It will be filled up fairly quickly, and once filled, all that’s left is to maintain it while you build up the rest of the garden’s structures.

It’s quite sad that Babylonia reads like a checklist of what needs to be in a match three rather than adding anything extra to the mix. The graphics are very sharp, and the soundtrack is rather beautiful, replete with a cool, mystical Middle Eastern vibe. The use of the ancient tale of King Nebuchadnezzar is a great backdrop.

But high production values and interesting backstory can’t make up for middle-of-the-road gameplay. If you haven’t played many match-three games, then you will definitely enjoy Babylonia. If you’re familiar with the genre, it’s a decent way to pass the time, but won’t be anything more than a trip down memory lane of games past.

See also: Flower Paradise, Hidden Wonders of the Depths, and Trial of the Gods: Ariadne’s Fate.