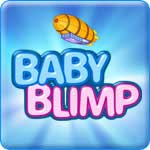 Contrary to popular belief, babies these days aren’t made with the help of the birds and the bees. They’re mass produced on a giant blimp which is managed by storks! At least that’s the premise of Youda Baby Blimp, a quirky time management game that puts a whole new spin on making babies.

As Chief Stork, you’re in charge of the Baby Blimp. To start, pull the level on the slot machine to select the correct gender. Failing to do this in time means one gender is randomly selected for you, causing you to risk losing serious points. Once a baby is created, it will slide out on the assembly line. Sometimes a baby will try unsuccessfully to stand up, so you’ll need to catch him. Next, he’ll be looking for a toy, and then a bottle (which you must make in advance). Without fail, the little guy will then “spit up” all over himself, and you’ll need to fetch a napkin and wipe his face, and toss it away.

The baby will sometimes want a bath, but other times will be ready for a nap. Once all of the baby’s needs are filled, he’s ready to be launched – yes, launched – and will be automatically loaded into the machine. Press the button in a timely fashion to send him on his way. An assortment of upgrades can be purchased to make your job easier.

Later in the game the chance to make twins or more will be unlocked, as shown by a small button on your slot machine. Clicking it at the right time will multiply the baby, and those special multiple births result in babies with no needs to fill! If only that were true in real life…

Once you’ve successfully made and packaged all the little bundles of joy, it’s time to deliver them to their proud expectant parents. Make sure to deliver the right gender to the right household, or else you’ll earn no points for the delivery. Storks can only carry one baby at a time, unless you’ve bought a strength upgrade which allows them to carry two or more. There are also speed upgrades to get the storks moving more quickly. Bigger houses and hospitals equal parents with less patience, so you’ll want to serve these folks first.

Delivery storks are affected by weather, like rain, snow, and lightening storms. You’ll need to dress them with the appropriate hat, or else the baby will be returned and the stork will need a few seconds to recover from the shock. Sometimes it’s hard to see what the weather is at a particular house if another house is in front of it, and this is extremely frustrating.

Just like in real life, some people simply don’t like kids. Look out for anti-stork neighbours who will try to toss things at your storks. A target will appear by a stork’s head, and you’ll need to click it to get your stork out of danger.

You’ll need upgraded storks in order to make and deliver twins, triplets, and quadruplets. Nobody specifically requests multiple births, so if you have twins to deliver, just drop off the right gender to any house requesting a baby.

In between each round, you’ll be taken to the trophy room to see any trophies you’ve earned, along with your score. Trophies are rewarded for making special combos and for flawless game play, and most of them are tough to achieve.

To give Youda Games credit, they certainly make an effort to provide interesting themes, and the developers that work with them aren’t afraid to take risks on new ideas and to think out of the box. Games about babies are nothing new, but I can’t recall every playing one about a stork delivery blimp before. It’s quirky, but it’s something different, and it’s nice to see new themes and twists on time management.

On the downside, you can only access the menu in certain screens (like the stork delivery screen), which is a pain if you’re ready to quit. There are occasional minor English errors as well. Unfortunately, considering that it’s a fairly complex time management game, there are very few instructions given, and those provided are vague. This can cause lots of frustration for newbies, and might turn off players who would otherwise enjoy the game.

You are never explicitly told how to create twins, or what the various upgraded assistants actually do in the game. This might make you think the controls are unresponsive, when in actuality you are simply missing a step needed to proceed. The game could really use a clear tutorial.

The baby graphics are exactly the same as another of Youda’s titles, KinderGarten, and the music is very similar too.

Despite some issues with the interface, Youda Baby Blimp is strangely addictive and grows on you the more you play. Once you’ve figured out the details and learned how to work most efficiently, it’s enjoyably challenging and fast-paced. The biggest issue is the learning curve, which will quite likely frustrate many users when first playing the trial. However, if you have the patience to stick with it, it’s a cute and original title that’s fun to play.