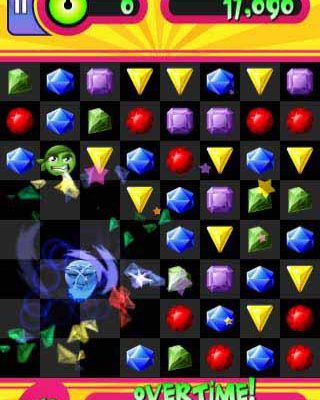 Innovation isn’t a word that’s used too often when describing match-3 games. Sure Bejeweled Blitz offered a neat re-tooling of the genre, but new experiences like that are few and far between. Babo Crash is one of those rare new experiences, and it’s one that works incredibly well. Crazy power-ups, challenging obstacles, and unique objectives turn the well-worn match-3 formula on its head — and we couldn’t be happier.

Offering up only a single mode of gameplay, Babo Crash will take players on a ride through 21 levels of ever-evolving match-3 challenge. At the core of this gameplay are “heroes”, funny-faced power gems that you’ll create every time you complete a match-4. Each gem color will have its own hero, and each hero has its own power. Match four purple gems, for example, and you’ll create a hero that will remove every purple piece from the board. Match four orange gems and you’ll create a hero that rolls around the board in a destructive volcanic rage. With so many colors creating so many heroes, you’ll never go more than a few moments without being able to trigger a cool, game-changing effect.

Heroes are an excellent touch, but heroes alone wouldn’t be enough to call this experience revolutionary. Dozens of match-3 games offer power-ups, and while Babo Crash‘s use of these feels fresh and fun, it’s still far from an original idea. But heroes are only a small portion of what Babo Crash has to offer. You’re still going to have to do battle with the forces of evil, safely diffuse bombs, and even rotate your iPhone in every direction imaginable. The gameplay here runs the gamut. 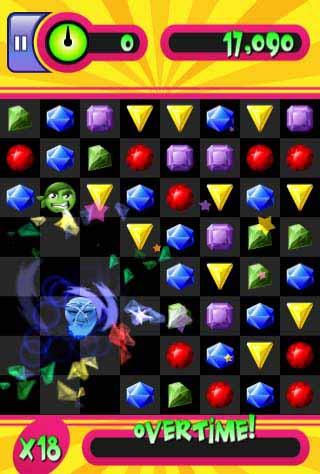 The evil in Babo Crash comes in the form of the Chompii – a creature that digs its way between gems until it finds one that it wants to ruin, creating an unswappable object in its place. You can eliminate these objects by matching a gem that’s touching it, or you can try to wipe it off the map using one of your many hero options. As the levels progress, you’ll do battle with so many Chompii’s that it feels like your drowning. Luckily there’s a superhero on your side that’s created when you match 5, and he can knock every Chompii off the board in one fell swoop.

The remaining elements, bomb disposal and iDevice rotation, go pretty much hand in hand. In some stages a bomb will be dropped instead on a new gem. It’s going to explode if you don’t deal with it in time, so you’ll need to guide it into a 4×4 safe zone before it detonates. To do this you’ll clear gems below the bomb to drop it down – but what if you have to make a left hand turn? Rotating the device in Babo Crash will change the gravity in the game. Whatever side of the playing field is facing down is the direction your gems will fall. It’s a great touch for those who can think fast enough on your feet to see the matching opportunities that stem from falling gems, and an even greater touch when it comes to controlling certain heroes whose movement follows that same gravity.

Despite only offering the one play mode, Babo Crash is a tremendously meaty offering in the world of match-3 games. We would have loved to have seen an additional “endless” or “survival mode,” but considering the challenge offered up in the later levels of Babo Crash we can see why they didn’t feel it necessary. Our only real complaint crops up from a minor technical glitch. Living up to its name, Babo Crash seems somewhat crash prone. It didn’t happen too often, but on more than one occasion during the course of our play in the past week, the game locked up and we were forced to exit the app and reboot. Thankfully the game knew where we had left off, and started us right back at the exact same level. It’s a little bug, and it’s annoying, but there’s no reason to think that won’t be addressed in a future update.

Making a match-3 game seem fresh and relevant is a nearly insurmountable challenge, but the team at Playbrains have pulled it off splendidly. Packing so much unique gameplay into a previously stale formula makes this a godsend for gamers who grew tired of match-3 games long ago. At its bargain basement price, Babo Crash is an absolute must have for iPhone gamers.