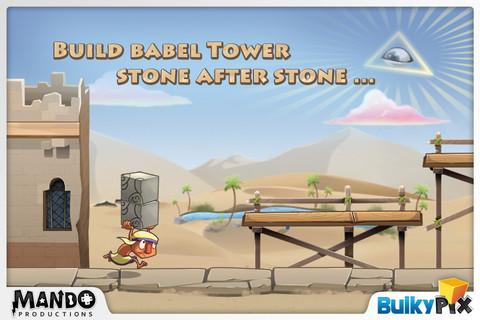 Tired of playing god in Babel Rising? Defy him in Babel Running!

In the biblical tale of the Tower of Babel, the unified race that emerged from Noah’s Arc decided to build a tower that would reach the heavens. God, angered by the people’s decision to reach his level, forced all the workers to adapt different languages, making it impossible for them to work together. Instead of the language thing, though, imagine a vengeful god that destroyed the workers with the elements of nature. You are now imagining the new BulkyPix runner, Babel Running.

As a sequel of sorts to Babel Rising, this version puts you in the shoes (or sandals, if you will) of an individual worker, rather than in control of an angry deity. It might sound considerably less fun to play as a lowly worker, but it’s all about the challenge! Can one speedy peasant outrun the forces of nature?

Long story short: no, you can’t. However, don’t you at least want to say that you survived longer than any of your friends could? Because that’s the fundamental concept of every runner on the App Store, and it’s pretty much all you can do in Babel Running.

The idea is to build as many blocks out of stones as you can for use in the tower. You can carry blocks in stacks of up to three at a time without burdening your speed or strength. A single tap causes your worker to jump, and he can extend that height with a second jump in midair. The more blocks you carry, the more points you’ll earn at a time.

Collecting three stones will award you with a new block, but taking a hit from the game’s various obstacles will deduct your count by one block. Take a hit when you’re carrying no blocks, and it’ll be the end of your god-defying ways. In your path will be spiked balls, cobras, pits, and the elemental wrath of an angry god. You must really want to build this tower!

Dodging the lightning and fire while racking up the highest score is definitely fun for a while, but there isn’t really a big catch to keep you coming back over and over again. There aren’t any missions like in similar title Jetpack Joyride, and there isn’t an in-game currency to spend on additional items, either. We’re not saying that these options have to be included in every runner, but they’ve become such a standard to the genre that a game without them feels a little odd.

There are powerups, but only as an additional .99 cent purchase that they’re calling the bonus mode. It seems kind of silly to have to pay for in-game powerups, but I guess that’s just the way things are. Bonus mode adds a few additional pickups like shields and instant collections of 3 stones at a time, but that’s about it. 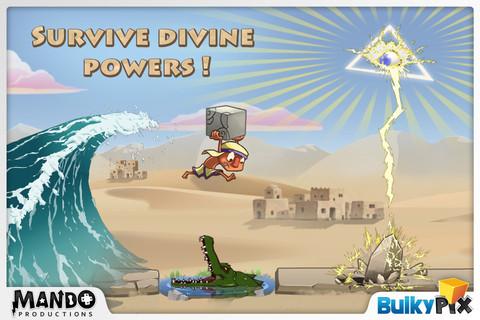 In terms of fun, the bonus mode barely changes the dynamic of gameplay. However, if you’re looking to battle it out for the best high score amongst friends, the bonus mode is almost a required purchase. We’re not big fans of the mandatory purchase of power, but that’s what you’ll have to do if you want a big advantage over your non-bonus friends.

Babel Running looks nice, plays smoothly, and is fun for a while, but it doesn’t do very much to shake up the genre. It’d be a lie to say that it isn’t fun, but the repetitive nature and lame bonus mode keep it feeling a little behind the times.