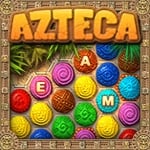 Suddenly here to fill the void comes fresh, head-scratching outing Azteca, an intriguing spin on the typical "match-three" puzzler that challenges you to save the storied civilization by uncovering words of wisdom its gods secretly seared into stone.

Despite high system requirements, occasional bouts of slowdown and a sense of pacing that’s arguably too relaxed for most, it’s yet another thrilling entry into the casual gaming canon, and one you should certainly be checking for.

First things first; though there’s only one play mode, rest assured it’s a winner. Swapping between stages – self-contained scenarios composed of randomly-shaped grids of hexagons, each containing a differently colored stone – you’ll tackle the adventure a single level at a time. The core objective throughout: Remove all rocks with letters stamped upon them, thereby spelling words such as "stile" and "basalt" and drawing closer to uncovering hidden messages between each mission.

The big twist here is the way in which you make linear matches of three or more stones. (A process which, naturally, causes all objects involved to disappear from the board, creating gaps soon filled by rocks which tumble down from above…) To be specific: Select a stone with your mouse, and both it and two adjacently-situated companions actually rotate clockwise around the particular hexagon you’ve chosen.

Remove four or more in a single fell swoop, and you’ll also be awarded a power-up bonus. Such extras take the form of explosive stones; flaming bolts which zap outwards, destroying all in their path; or carved granite faces that spit fireballs in the direction they’re currently facing when clicked on. Of course, there’s also a slowly-shrinking time meter you must constantly worry about, although you’re seldom pressed for precious seconds, thanks to the title’s leisurely action and generous (some might even say almost laid-back) tempo.

Given this caveat, it’s to developer Intenium’s credit that the title remains as persistently engaging as it does. For starters, environments come alive with motion – there’s always something on-screen sparkling, shining or disappearing with a twinkling poof. Level design work is excellent too: Some stages make use of color-activated switches, others glass that breaks when stones fall atop it and still more lava fields that generate exploding boulders – needed to destroy brick-like obstacles – when matches are made upon them.

Nonetheless, I seldom felt challenged while breezing through its 150 levels. Much as vocabulary and secret missives are part of the adventure to boot, opportunities to insert word game-style sub-quests aren’t truly capitalized on. In other words, the title’s creators have done a fine job of putting together a basic, audio-visually engaging outing that introduces a cool play mechanic and some captivating uses for it. They just haven’t taken the next step of building upon this foundation, lacing in other game styles and lavishing time on value-enhancing peripheral features.

No problem there – far be it from us to complain about a concept this viable even without such lavish window-dressing. Still, you do pay a price for the pleasure of experiencing it, in the form of high system requirements that occasionally cause your computer to crunch along and slow in the middle of otherwise fluid engagements.

It’s hardly a show-stopping gaffe; just a little something we noticed while tinkering around on our test PC. So don’t let it stop you from digging in and exploring Azteca’s splendorous confines – after all, an initial turn this good deserves a bigger, better sequel. Intenium: Are you listening?