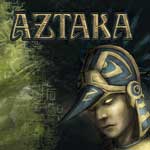 The word "reverence" isn’t something often used when describing games. But Aztaka, a new, independently-developed game from Citeremis, shows that when a developer has reverence for both the history behind their game as well as while crafting it, great things will likely result. And result they have.

Set in Mexico in1328, Aztaka follows the story of an Aztec named Huitzilo, a young man with a big destiny. His task is to find the seven keys to the Path of Gods and bring balance back to his people and his land. Aiding him in his task is Ayohpa, a hummingbird with a mysterious past, and Huitzilo’s source of magic. The two warriors must stop the evil Snake Woman, Chihuac, who murdered your mother.

Part role-playing game, part exploration, part platformer and part puzzle game, Aztaka will keep you on your toes. The game you by giving you lots of information at all times. On your screen, you can access the quest menu, the equipment and item menus, your life bar, a list of spells, and see your stats – all at once.  While it is daunting at first, it becomes second nature to know where to look to find information. The game gives you information as you need it with a helpful tutorial system.

The reason things are easy to see is due to Aztaka‘s stunning graphics. The game’s hand-drawn look is breathtaking. A Mexican-inspired soundtrack adds to Aztaka‘s atmosphere. From lush jungles to stone temples to the darkest caverns, Aztaka‘s world truly feels alive.

Controlling Huitzilo is straightforward. Movement is controlled by the W, S, A and D buttons (jump, duck, left and right respectively) and the mouse (right-click to attack, left click to select or grab items). You can also select spells by clicking on your hummingbird companion.

To succeed, you must be able to defeat enemies in combat as well as aid those in the land. Puzzles are solved by using mystic energy, which comes in different varieties, from earth to life to death to light. You can store energy in an upgradable container at the bottom of your screen. Energy has many different uses. By clicking and dragging balls of energy, you can perform many tasks, like healing others (or yourself), making light shine in the darkness, open chests or even make trees group new branches to cross large gaps. Be sure to keep a good supply of energy, as some tasks require more than one ball of energy.

As you defeat more enemies and gain new abilities, you can level up different stats such as your attack, defense or luck. Becoming more powerful is key to defeating the game’s tougher bosses. Items you acquire (by finding them or purchasing them from the various merchants in the game) grant you stat increases or even new abilities like greater jumping.

If this last part sounds like the classic videogame Metroid, don’t be surprised. Developer Citeremis stated that the Metroid games were a big inspiration to them, and it shows. It shares that series’ high production values, but also its structure.

Often, you will have to backtrack in the world of Aztaka. In order to get a new item or advance past a certain obstacle, you will need to return when you acquire the proper item or power-up. The game is divided up into different areas which are selectable on an overworld map. While making the game more accessible by dividing up its worlds, it does make the game feel segmented. There are no in-game maps, but other than areas that are deliberate mazes, it never gets overwhelming. Still, for those who have not played a game like Aztaka, it could be frustrating.

Also, venturing into the wrong area too quickly can spell certain death. When exploring a cave maze, I entered a door and was promptly slaughtered by a boss beetle in short order. Again, while this is par for the course on a Metroid-style game – don’t venture where you shouldn’t yet – people unfamiliar to this may be turned off. The game autosaves when you exit each area, so if you do lose (and do not have any favors from the gods to continue) you won’t be too far behind from where you left off.

Even though it sounds like it may be a bit much for the more casual player, don’t let the challenge of Aztaka be a negative. A bit of perseverance, patience, planning and reflexes will grant you an excellent experience. Citeremis should be proud of their first major release, and gamers should not miss this great adventure title.