Azkend 2: The World Beneath Review 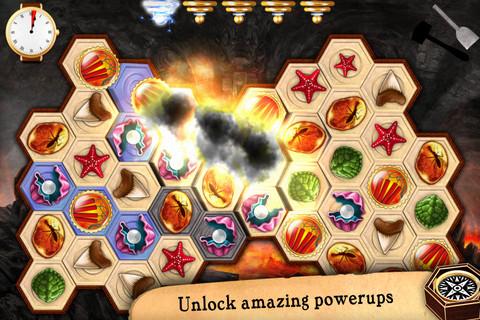 Shipwrecks. Both unwanted and unneeded, a mast-shredding gale and deadly whirlpool can throw a wrench into even the saltiest sea dog’s voyage. Fortunately for you, however, such a catastrophe results in hours of fun puzzles, which is the case in the match-3 game, Azkend 2.

The story, which is beautifully illustrated with ornate, storybook-like graphics, set to an equally lush soundtrack, and artfully narrated by a British voice actress, tells of a captain whose ship wrecks while traveling from Liverpool to New York in the eighteenth century. After being sucked into a mysterious whirlpool, she finds herself in a strange, forested world, and proceeds to explore even stranger environs as her quest rolls on.

To help the heroine, you must complete around 70 challenging puzzles, matching at least three identical tiles to clear them from the board. As you clear tiles, an artifact eventually appears at the top of the game field, and you need to navigate it to the bottom of the grid before time runs out.

It’s a pretty basic match-3 formula, but with plenty of unexpected and refreshing mechanics thrown in as the game progresses. For example, you’ll have to thaw frozen tiles by clearing adjacent ones, or you’ll have to defeat three bugs by clearing nearby tiles before the critters reach the top of the grid.

Plus, once you beat a chapter (each chapter poses three or four puzzles), you’ll be awarded a power-up, adding further layers to the gameplay formula. Each power-up you unlock will be added to your collection of power-ups. You’re able to “equip” different ones from this library at will, allowing you to reap different benefits: the binoculars power-up adds binoculars tiles to the grid, for instance, and when you match three, some single tiles along the perimeter of the grid are automatically eliminated. The bifocals power-up drops you hints, meanwhile.

In addition to the story mode, the game offers time and medal challenges. You’ll have to solve puzzles as quickly as possible and rack up the highest scores. Your achievements are shared on an online leaderboard.

Put simply, match-3 games don’t reach higher quality than what you’ll find in Azkend 2. With games like these, when attempting to scrounge up some cons, it’s easy to fall into the trap of, “Well, even more levels would be nice, so it wouldn’t end.” But the game offers a meaty amount of levels in the story mode as it is, plus there are the two challenge modes for additional replay value. Fans of “Bejeweled” and its ilk simply cannot miss Azkend 2. It sets the standard for its genre.