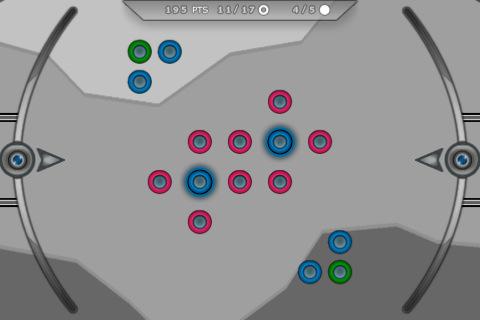 Pachinko gameplay has become something of a casual mainstay in recent years. The satisfaction that gets stirred up when a ball bounces off a series of pegs is downright primal. aYa-Manku, on the other hand, attempts to offer a more sophisticated approach to pachinko-style physics games. Skill replaces luck here, and only the toughest of puzzle gamers will survive.

Players explore 17 different mines, each with a variety of levels, and collect fruit for the adorable Manku-un. To collect fruit, aYa-Manku will task you to aim “collectors” at pachinko-style pegs that will be collected and disappear once you make contact. It’s a simple enough process on paper, but since you’ll only be given a limited number of collectors and need to collect specific pieces of fruit to advance, gamers should prepare themselves for a relatively high level of challenge.

Controls offer a unique combination of accelerometer and touch-based gameplay. To aim the collectors, players will need to rotate their iPhone. To fire, they’ll hold their finger on the collector and release. The longer a finger is held, the more powerful the shot will be. Players can also scroll up and down in each challenge by swiping up and down with their finger in much the same way they would to navigate a web page.

Both the controls and physics were spot on for the most part, though we would have really liked to see the addition of a sensitivity adjustment for the rotation. By default, you’ll need to make some fairly large motions to see the full range of aiming positions. Things would have felt much more comfortable if smaller motions could mean bigger results, but without the option to tweak sensitivity, that simply wasn’t the case.

Gamers who are used to the randomness of other pachinko inspired titles like Peggle or Sushi Cat may be taken aback by level of skill and precision that aYa-Manku demands. This game isn’t simply some willy-nilly high score drive, it’s a puzzler that demands a great deal of patience and focus from its players. With only a limited number of collectors at your disposal, it only takes a few small mistakes to leave you without the tools you’ll need to finish the job later in the mine. 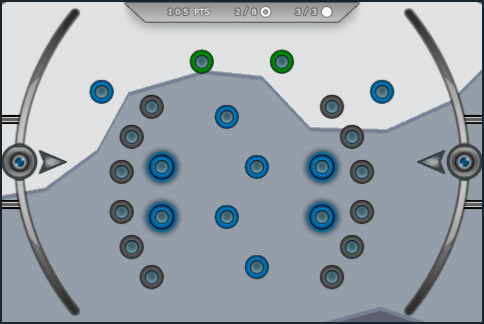 aYa-Manku‘s unforgiving nature is both its greatest strength and most glaring weakness. Puzzle gamers looking for an intense challenge will love the way in which this offering is presented, but for the more casual puzzle gamers out there, aYa-Manku may simply be too difficult to be any fun. This problem is punctuated by the game’s complete lack of difficulty settings. All that’s needed to make this aYa-Manku accessible and fun for all players is an easy mode — one that offers double the number of collectors in each mine. As it stands, the challenge in aYa-Manku requires the patience of a saint.

The presentation here seems to embrace a minimalist design philosophy, but it works for the game offered. The only thing that seemed odd was, despite being a story about “fruit” and “collectors,” every item in the game was represented by a different colored node. The look worked for the game, but it did little to reflect the story elements. Since the story is so barebones and unnecessary to begin with, it’s an easy complaint to overlook.

aYa-Manku offers up a unique skill-based puzzler built off the basics of pachinko, but without some tweaking, the difficulty here won’t really appeal to the average iPhone gamer. It’s a shame too, because with only the smallest of tweaks, aYa-Manku could be something that everyone could enjoy. Gamers looking for a serious challenge will love the level of skill aYa-Manku demands, but for the rest of us? Well… at least there’s always Peggle.