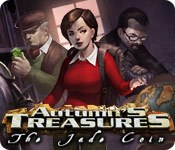 Autumn’s Treasure: The Jade Coin has everything a great hidden object game needs. It has a plucky heroine, a lost treasure, a trail of clues that leads all over the world, and a nefarious syndicate up to no good. It’s even put a nice twist on the item-finding mechanic and thrown in a few puzzles for good measure. So why is it such a tedious, boring chore to play?

Well, let’s start with that heroine of ours. After inheriting her grandfather’s antique shop, Autumn finds his diary, which makes mysterious references to a Jade Coin that brings good fortune. Further clues to the Coin’s location are to be found on pages from the journal that were tucked into artifacts that were in the shop – artifacts that have since been auctioned off to buyers all around the world. An exciting adventure, to be sure, but Autumn seems half-asleep and bored every time she pops on screen to offer a comment or clue. She’s in good company, though; none of the characters in the game are likeable or well-acted. Even players who normally enjoy following the plot will find themselves clicking through dialogue as fast as possible just to get it over with.

Unfortunately, The Jade Coin falls short in the gameplay area, too. Rather than finding items from a list, Autumn must find pieces of items in order to help her proceed (in the same way as Flux Family Secrets and the Mortimer Beckett series). She might have to find the bits of a crowbar to open a box, or assemble a wicker cage to trap an angry coati. In theory, it’s a great idea, combining basic puzzle solving with object searches, but in practice, it’s not much fun. More often than not, you’ll be combing locations for a bit of squiggly metal, sticks, or some other similarly unrecognizable bit of junk that will eventually make the item you’re looking for.

Every object you assemble will be used in the environment somehow to help Autumn on her way, such as turning on the lights or opening a door. Completing that task will inevitably lead to several more items that need to be reassembled, and so on. Each location you visit has two or three parts to it, so you’ll have to move from room to room over and over again every time you’re assembling a new item.

What’s particularly frustrating is that it’s not always obvious what you’re supposed to do with an object once you’ve put it back together. Puzzles you’re meant to solve will highlight when you mouse over them and will give pretty obvious hints about what you need to do to them ("I bet those rats would like some cheese!"), but they’re sometimes tucked out of the way and can be easy to miss, leading to many moments when you simply don’t know what to do next.

The Jade Coin does provide some valuable help, though. Mousing over an item’s silhouette will tell you not only what it is, but also show you what the bits it’s been broken into look like. If you still can’t find what you’re looking for (or, more likely, are just sick of looking for the seventh nondescript rock you have to find), you can click on your grandfather’s amulet for a rechargeable hint. You can use as many hints as you like, but each one adds five minutes to your overall score – a pretty harsh penalty.

Solving the mid-level puzzles, rather than skipping them, will shave two minutes off your score, however. The puzzles, such as sliding tiles and simple matching tasks, are fairly easy and usually worth doing if only for the time bonus. Each level ends with a fairly easy jigsaw that points Autumn at her next destination.

Autumn’s Treasure: The Jade Coin has plenty of good ideas, but falters when it comes to executing them. It has nice enough visuals and a few well-done sequences here and there, but overall it’s just not that much fun. Autumn is pretty bland, as main characters go, and the item searches grow tiresome very quickly. There are better adventures to be had.