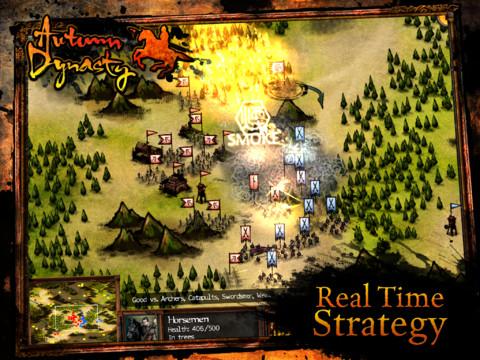 The most epic battles you’ll ever fight with your fingertips

Total War. Age of Empires. Warcraft (the non-“World of” variety). Whatever your personal fix might be, there’s nothing quite like amassing dozens of tiny soldiers to do war with each other. This subgenre of RPG (dubbed Real-Time Strategy) seems like it’d lend itself perfectly to touch-based controls, but only few companies have attempted such a complicated genre on mobile.

Hopefully, after what Bulkypix has shown what is possible with Autumn Dynasty, we’ll be seeing a lot more RTS gameplay on touch-based devices soon. While not as expansive as a full-blown PC title, it makes an excellent case for the genre, while also boasting some great presentation, to boot.

Set in a fictional Chinese setting loosely based in the aftermath of the real-life Opium Wars, the story of Autumn Dynasty tells the complicated tale of rebellion and politics. The working class has been stifled of their usual yearly food delivery, despite a strong harvest, and have chosen to revolt against the empire. The soldiers, while eventually made aware of the rebellion’s hardships, are forced to protect their land.

Through about a dozen missions set in both empire and rebel perspectives, players micromanage armies in order to protect, destroy, and uncover an ancient power held secret by the government. While the game’s narrative is told mostly in single-still text narration, it’s a compelling tale nonetheless.

But, let’s be honest here: nobody comes to an RTS for a compelling story. Gameplay is key, and it’s here that Autumn Dynasty truly delivers. It’s not incredibly deep, but every aspect of traditional RTS titles remains: economy management, structures, unit production, rallying, abilities, and micromanagement are all factors in every battle.

Set in a traditional isometric perspective, your goal is to manage tiny platoons of soldiers as efficiently as possible in battle. While there are only five different buildings and units to produce – a fairly low count by traditional RTS standards, gameplay remains surprisingly challenging and thoughtful. Managing income and production is as important as combat itself.

Battles unfold in a traditional rock-paper-scissors style: pikemen beat horsemen, horsemen beat archers, archers beat swordsmen, swordsmen beat pikemen, and catapults decimate buildings at the expense of crumbling to all regular combat. In addition, each unit carries two unique abilities to change the flow of battle at the expense of acumen, a power-up resource.

It’s through these abilities that battles remain complex, despite the simple front of just five available unit types. Archers can hurl a storm of arrows that slows enemies in a specific target. Pikemen can set up an ambush on unsuspecting invaders. Horsemen can dash at great speeds, while also having the capability to set grasslands on fire and weed out attackers. If anything, it feels like the perfect balance of depth, which is much better than combat so complex that you can’t understand it.

Management of the troops works well, but the real surprise is how beautifully it’s implemented. Troops can be selected by type with a double tap, gathered in an army by swiping a circle around a group, or sent into motion with a swipe to determine their path. Every finger-based motion creates a fluid streak of caligraphi-style paint on the screen, making future movements both visible and fun. 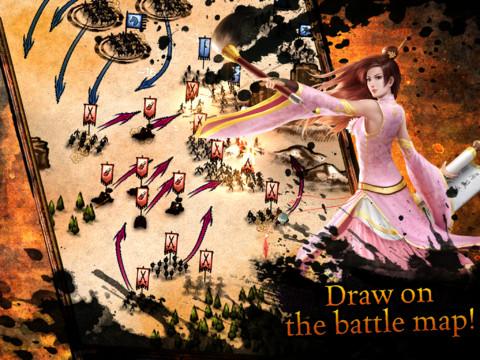 Gameplay itself is split into two modes: the obligatory story campaign, and skirmishes. The campaign is a great way to introduce each new aspect of the game in a progressive maner, but it does tend to get very unforgiving very quickly. Toward the end of your missions, there will be one mission that requires the use of stealth, and another that pits about four soldiers against twenty. Like real war, these stages are brutal, challenging on your wits, and not a whole lot of fun.

Where Autumn Dynasty (along with the RTS genre as a whole) really shines, though, is through its skirmish mode, which pits two equally strong armies against eachother. Both sides must build up from scratch, placing reaction time and battle strategy at upmost importance. Skirmishes can take place against a varying difficulty AI, as well as the sea of other real-life players eager for a match.

Multiplayer, when it works, is fantastic. Lag is low, and there’s nothing like pitting your strategy and reflexes against another human opponent. Voice chat is even an option, if you want to talk smack while toppling buildings. I’m not personally crazy about talking while I’m micromanaging as much as possible, but it’s cool to see the option available. 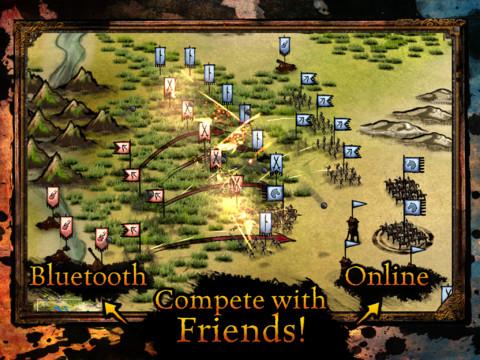 The only downside to multiplayer is a handful of various kinks in the system. My game crashed twice while attempting to start a multiplayer game, and once in the middle of an active one. The games that I did get to play all the way through, however, were perfect.

Whether you’re a veteran to the RTS genre or a complete outsider, Autumn Dynasty is a fantastic product, and a perfect example of a beautiful and intuitive way to use a touch screen interface.