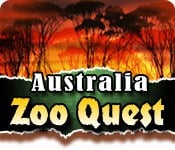 Australia Zoo Quest is a game that comes about four years later than it should given its outdated gameplay and associated with Steve "Crocodile Hunter" Irwin, the Australian conservationalist who passed away three years ago. A match-three puzzle game originally released in 2008, the game is built around a license from the Australia Zoo with the goal of progressing through 20 levels – with three difficulty settings each – to unlock some pictures and information about 20 animals that live in the zoo.

Essentially, the playfield consists of round pictures with various cartoon animals on them. You click on the pictures to create links of three or more like animals, then clear the link from the board by clicking a second time on your final link. The longer the chain, the more points you get. As you play, a “sick timer” counts down, and if you don’t make a link fast enough, a green blob of goo flies onto the board and infects an animal. These sick animals should be cleared quickly with a short chain, as the link won’t be worth any points for clearing them. Clearing chains of nine animals or more grants you a “cure” button, which clears all sickness from the board.

The goal is to fill a score container to 10,000 points (at first; the goal increases as you advance). Each three-animal chain is worth about 100 points, so it’s obviously better to go for longer chains. To help increase the score, wild cards appear, and multiply the score of the chain by how many animals are in it. There’s also a time-freezing link that stops the sick timer for five seconds to help clear off the board. Should you be unable to make any more chains, you lose one of your three lives, and the pictures are reshuffled. Lose all your lives, and you have to start that level again.

The problem is, that’s about all there is to the game. The other difficulty levels simply add obstacles that aren’t particularly hard to overcome. Easy mode adds no difficulties, Medium has some links that, should they become surrounded by sick animals, turn gray and cannot be used for a few turns, while Hard changes the gray-outs for locked pieces that must have one of the sick animals surrounding it cleared away. The sick timer just gets faster as you climb through the levels, but nothing more.

That’s it, really. It’s very hard to get motivated to learn about something that a quick search on Google or Wikipedia could illustrate. There are no achievements or trophies to be found here, and with only three modes and no variety of gameplay, it gets really stale, really quickly.

Australia Zoo Quest seems rather slap-dashed together, even by kids’ standards. The graphics are boring but functional, and the audio is easily mutable. The Australian chipmunk voice that narrates the tutorial is very difficult to understand. You’ll hate hearing the word “Crikey!” shouted every time you use a wild card link.

But, most unsettling, is the timing of this game given the tragic death of Steve Irwin in 2006. While the famous Crocodile Hunter is still the face of the Australia Zoo (though his wife and children are more prominently featured), it seems a little off-putting to play a game that was associated with a deceased celebrity more than anything else. In fact, the “Wild” links as they are called in the tutorial actually are labelled as “Crikey” in the game – one of Irwin’s best-known catch phrases – and are cleared with the aforementioned voice exclaiming it. The original box prominently displays Irwin in a trademark fist-pumping pose, which shows exactly what I mean about promotion through the departed.

Worst of all, though, is the game is just not that great. There are so many engaging match-three titles out there that Australia Zoo Quest comes off as being a piece of corporate promotion rather than a full-fledged game. If you want to learn more about Australia’s animals, go to the library, or watch one of Irwin’s documentaries.

If you liked this game, try Eco-Match, Lost in Reefs, and Big Kahuna Reef 2.