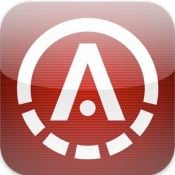 Aurifi is certainly the most unique game I’ve seen yet on the iPhone. Heck, I’ve only played a game like this once before but that was some obscure Japanese game not even officially released outside their borders. Aurifi is an audio-only game, which means you can play it with your eyes closed. It’s a strange feeling when you take your sight out of the game and rely only on your hearing to play. It was a gamble to make a game like that and for the most part it pays off well.

So how do you play a game without your eyes? Let me tell you, it isn’t easy. Aurifi is essentially a bunch of strung together mini-games that take place over an ambient trance-like song. The game makes certain sounds and you need to discern which sound it is and react accordingly. All of this happens and plays out without the need for you to use your eyes.

As such, the game doesn’t rely or need any on-screen graphics. The game does display a splash screen of sorts and the logo of the game floats and moves with you as you tilt it, but you don’t need to look at it in order to play. I actually found it easier to play with my eyes closed in order to really concentrate on what was happening.

So for this game you NEED to wear headphones, since you need to be able to tell which side the sounds come in from (make sure your headphones are on the right ears!). The game relies on this aspect heavily so they won’t even let you play without them. Trust me, even if they allowed it, you wouldn’t want to do it.

There’s a narrator of sorts that explains each game as they pop up and won’t let you continue until you get it right the first time a new one shows up. Some are mundane tasks like tapping the sides of the screen depending on which side the sounds it plays are. Some are much cooler. In one there’s a sound that will fly at you from either the left or right and just before it reaches you tilt the iPhone in that direction to deflect it away. It feels like you’re using the iPhone like a shield, and the effect is very well done.

All of these actions and reactions add musical elements to the song that’s playing under it, not unlike other rhythm-based games we’ve seen in the past. So what you end up with is a nice layered song that gives you a drive to not mess it up and to keep the beats rolling. You can easily get into the flow and tempo, and that helps you hit all the right notes at the right times.

The game isn’t without problems though. My biggest complaint are parts where you had to tap along with the beat that was playing, there was a lag between you hitting the screen and the sound being triggered, which meant it was out of sync with the rest of the song. For a game that relies entirely on sound this was a huge bummer.

A more minor complaint is the menu navigation to get the game started. The narrator reads everything out, which in itself isn’t an issue, but she does it very slowly and you’re just left kind of waiting for her to finish so you can just get on with it. I get what they were going for, wanting to continue that audio only experience throughout the entire game… I just wish they would’ve sped it up some.

Aurifi deserves major kudos for taking an interesting risk and creating such a unique product. For those looking for something different or those who are mere curiosity seekers I would definitely recommend checking it out. I can promise you you’ve never really played anything like it before. As someone that relishes new gameplay experiences this one definitely scratches that itch. It stumbles a bit with the lag issue but otherwise the game is put together really well. The risk paid off.