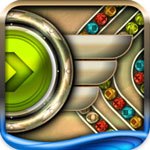 Can you imagine how you'd feel if you signed up to the armed forces, turned up fully equipped and ready for war, only to find out that the only skill you needed was the ability to match up coloured marbles? Chances are, in reality, you'd be a little put out, but when it comes to games, such trickery is commonplace, and in Atlantis: Sky Patrol's case, utterly welcome.

Big Fish Games' marble-matching-marvel has already turned the art of warfare into puzzling perfection on PC last year, but Atlantis: Sky Patrol is now iPhone bound and, by and large, it remains largely unspoilt. Though it's dressed up as a battle to save humanity, doomsday devices descending from the sky to wipe out every pillar of civilization on the planet, in practice, play is much similar to other marble matching puzzlers out there, Zuma, Luxor and the like. Atlanis, however, has a couple of extra tricks up its sleeve, however.

You control a craft that fires marbles up at a tube flooded with batches of marbles of its own every few minutes. Moving the ship is a simple case of holding your finger down on the screen and shifting left or right, lifting your finger back off firing the marble from wherever you left it. The bulk of play is focused on matching up these coloured marbles in groups of three, wiping them from the tube as they siphon through its twists and turns. Doing so is literally a matter of life and death, the marbles steadily rolling towards a goal at the end of the run. Should they reach it, it's game over.

But while clearing the marbles already in the run is essential, stopping them from getting there in the first place is your main target, and this is where Sky Patrol''s extra element comes into play. Doing so means taking out stagnant coloured marbles, set off on the map outside of the run. Each one disappears when fire upon by a matching marble from your ship, but getting to them is easier said than done, the lines of marbles heading through the level often blocking your view and, for sheer survival, diverting your attention.

In this way, Sky Patrol is almost as much about time management as it is matching marbles, your priority shifting back and forth between the two groups. Each level steadily adds new elements, also, your craft's line of fire bouncing back off some objects, as well as the static marbles disappearing from view periodically.

Merely completing each level isn't really enough, either. The further down the line the marbles get, the less bonus points you pick up as a result at the end of each stage, diminishing your ability to upgrade your ship. Upgrades are pretty necessary, too, Atlantis letting you increase the rate of fire, attract any bonuses falling through the sky to your ship with magnets, rewind the marbles back to their source or even delay their release in the first place. When combined, these bonuses have the ability to make some levels fly by, marbles wiped from memory before they've even got going.

That said, making short shrift of Atlantis: Sky Patrol won't be to everyone's liking, this marble-matcher proving both challenging and addictive, lending itself to long bouts of play. The lack of a multiplayer mode, when compared to the PC release, is perhaps something of a disappointment, the prospect of online battles proving mouthwatering, but even as it is, Big Fish Games has manage to translate its puzzler to the iPhone with far less drama than the game's dodgy 'disaster movie' style plot.