Atlantis: Pearls of the Deep Review 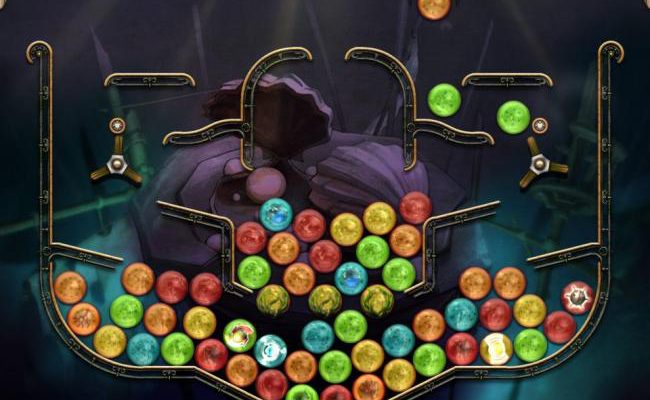 Help the queen of Atlantis save the legendary city from imminent destruction.

Few things are more exciting to us gamers than finding gameplay we’ve never seen before. The problem is, shortly after a new idea hits the scene, hundreds of copycat developers inevitably run it into the ground. That’s definitely been the case with the bubble popper concept—that is, until now. In Alder Games’ Atlantis: Pearls of the Deep, the miraculous has happened: someone’s actually found a new way to play the shopworn bubble popper.

As the name probably indicates, the game’s set within the context of the legendary city of Atlantis. Most of us think of Atlantis as a lost city, one that long ago witnessed its own apocalypse. Here, the city’s still vibrant and ruled by a fiercely loyal queen. As so often happens, though, when things are going well, some evil-doing creep shows up and threatens the city’s very existence. The queen appeals to the ocean’s mer-people, begging them for aid against the danger, and the mer-folk in turn request that you help them find a collection of magical pearls. Just how would pearls prevent the destruction of an entire metropolis? Who knows? This thin narrative framework’s merely an excuse for us to spend around 100 levels honing our bubble popper skills. 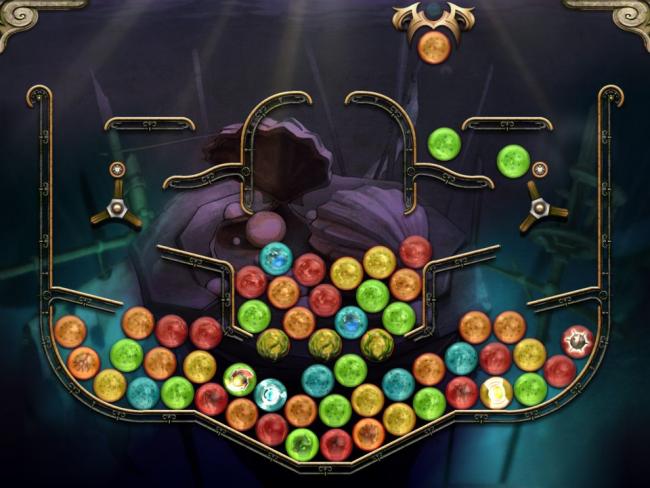 Despite being fairly late to the party as far as the bubble poppers go, Pearls of the Deep turns the genre on its head: literally. Traditionally, bubble poppers are played from the bottom up, with projectiles fired up into a bubble formation (moving or otherwise). Here, projectiles are dropped from above onto platforms of various heights and react more like cannon balls than soapy spheres. Whenever three or more bubbles of the same color touch they vanish, making the remaining bubbles shift and roll, sometimes completely off the screen. In that respect, the game plays more like an Angry Birds than a Bubble Witch. In terms of strategy, however, it’s really a first cousin to both of those games.

Things start pretty simply at first, then steadily ramp up level by level. The playing field’s laid out differently each time, with different platform quantities, formations and numbers of bubbles. The idea is to clear the bubbles containing magical shells and corals and such, and as time goes on, doing this requires much more thought. Platforms block one another, turning wheels appear, ramps bend to form bubble ski jumps; occasionally, they mix up the bubble popper routine by tossing in a brief hidden object level, asking you to collect things like shells, crystals, jellyfish and floating stars. It’s amazing really, how much variety Alder Games is able to wring from such a simple formula.

Each level asks you to clear it within a set timeframe using a set number of bubbles, usually along with another, third goal. Combos are achieved by creating chains of matches, and depending on the number of goals you fulfill, you’re scored one to three stars. You’re also awarded a certain amount of gold that you can then use to purchase a range of interesting power-ups, such as bubbles that explode, bounce and fire laser beams. What’s coolest about this aspect of the game is its preview mode which allows you to see what a given power-up does before shelling out your hard-earned gold for it. 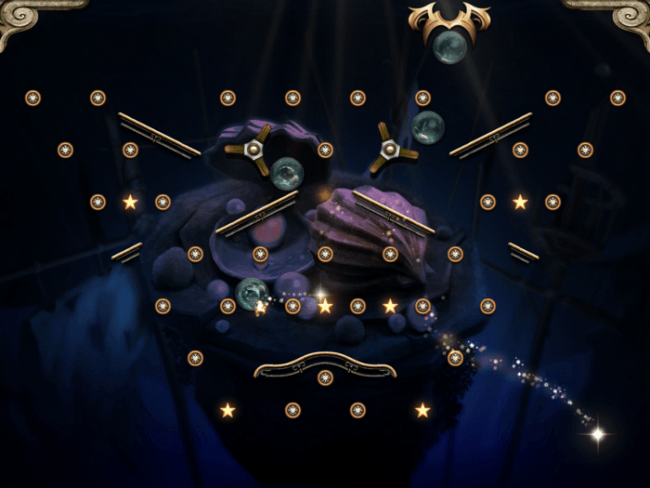 Graphically speaking, the game is charming (although in general I hesitate to use that word because it makes me think of simpering Victorian ladies), made up of colorful foreground elements against delicate underwater scenes rendered in (I assume digital) watercolor. The music too is appropriately soothing. Once you’re done with the main storyline, a “Challenging” Mode unlocks and you can further spend gold to unlock an additional Zen Mode. Challenging is what it sounds like—levels with platforms and obstacles in crazy arrangements that take a lot of planning to complete. Zen Mode is also what it sounds like—more of the same bubble popping play without the pressure. Pearls of the Deep is a really strong game. If there was anything that might improve it, it’s an expansion on its timid story element. While its pacing is good overall, if we got to enjoy more informative story sequences, things would become even more rewarding.

If like me, you’ve been terminally burned out on bubble poppers, Atlantis: Pearls of the Deep will get you back in the game. With pretty graphics, soothing music and a creative approach to bubble popper gameplay, it will single-handedly refresh the genre for you. And right now, when you score a certain number of stars in game, you can enter your name for a chance to win a real-life pearl necklace valued at $250. Not a bad incentive for popping a few bubbles.