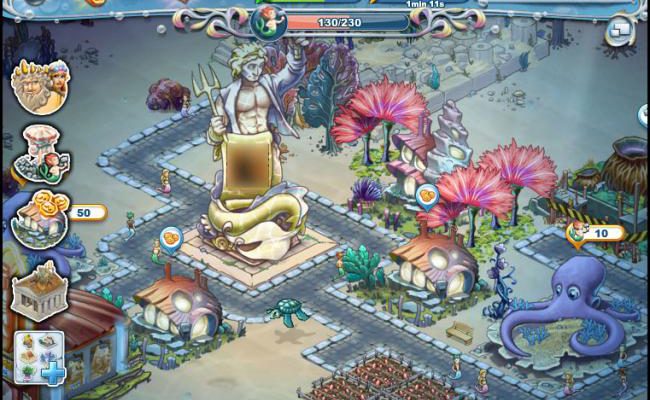 Build a city under the sea in Atlantis Fantasy

A new city-builder from the folks over at Kobojo has hit Facebook and this time it is taking players deep beneath the ocean waves. Atlantis Fantasy is the name, and believe it or not it actually feels very different from the rest of its ilk. Not only does it have a unique visual style, but it actually incorporates resource management mechanics that feel significant. Granted, it still comes with many of the features of its predecessors, but in a rare occasion, does not feel like a carbon copy.

Evidently Zeus threw a bit of a temper tantrum and sank the legendary city of Atlantis. Home to a race of merpeople, the remains are either in shambles or have been wiped off the map completely. Suffice to say, it’s up to you to rebuild this underwater society and return it to its former glory. 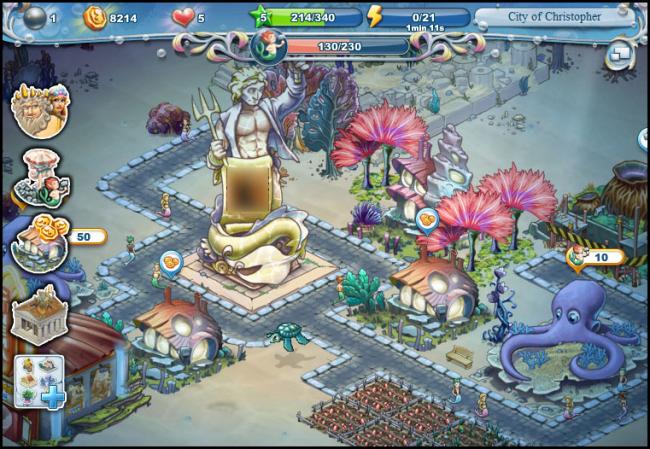 In order to go about this challenge, you are charged with managing several different types of resources, the most important of which are coin and population. This is the most standardized aspect of Atlantis Fantasy in that homes up your population and coin is primarily earned from said homes. Along with this, extra coin is also earned via the typical farming mechanic. However, this is where things begin to change a bit.

One of the first noticeable elements of the game is that population is numbered in the hundreds rather than starting in the single digits. This plays dramatically into the game’s production aspects. Like some other simulation titles, there are several production facilities that will spit out resources like coral, iron, and stone, which are required to finish construction on most buildings. Regardless of resource, it will always take a set amount of time to be produced. In order to augment the payout, you have to choose how much of your population to dedicate to the job.

As you progress in the game, the population resource becomes stretched thinner and thinner. This is because this same choice of distributing human resources applies to other structures (such as entertainment buildings that produce periodic coin at the cost of population and resources) or simply constructing new buildings. In terms of the latter, this choice is particularly useful, as applying more workers builds a new structure faster.

Atlantis Fantasy also gives you the choice on how and where to expend the recharging resource of energy. It actually does away with virtual currency being used to expedite things, and lets you speed up production or construction, by 10 minutes for every click on it (which expends one energy) you perform. That said, if you are not careful, it is easy to run out of energy very quickly. 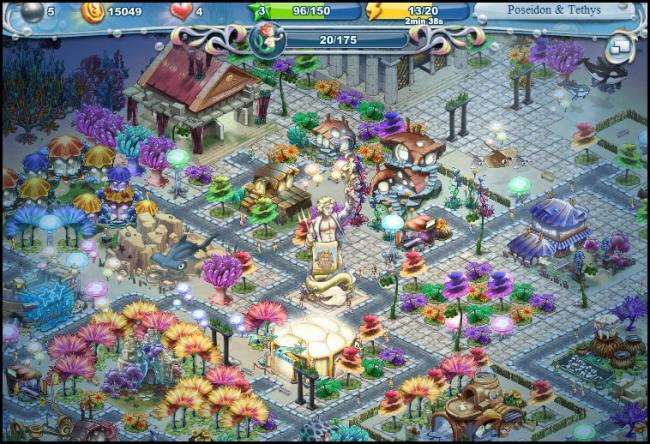 Also added into the resource management mix is another stat dubbed happiness. Unlike other city-builders, this isn’t a superfluous means of measuring your city’s success, but actually a spendable resource. It is derived from various sea creatures that can be bought and “fed” and used to restore ruins that you might come across. Of course, other resources are required as well, including those only garnered from friends.

This plays into the common social mechanic of asking friends for items. Usually these are some form of aquatic tool and some must be “given” via a friend responding to a wall post or gifted. That, however, is about the extent of social interaction, as the only other significant element is visiting each others’ underwater cities for daily rewards.

Even though the social elements are a bit bland, Atlantis Fantasy does make up lost ground with its aesthetic. As an underwater realm, it’s one of the most visually distinct titles of the city-building genre, and the level of polish in its presentation is very visible. Everything has a serene look to it and very little feels static. Additionally, much of the world is characterized with many production buildings consisting of mammoth sea creature (sort of like the Flintstones), and the city is frequented by schools of fish or whales that swim by overhead.

Atlantis Fantasy is the first city-builder in a long while to feel unique and interesting. Yes, it does host several of the genre’s core elements, but the presentation and style is truly different and the actual option to choose where resources are allotted is a great step forward. Beautiful and fun to play, this is absolutely a must try for any simulation game fans.