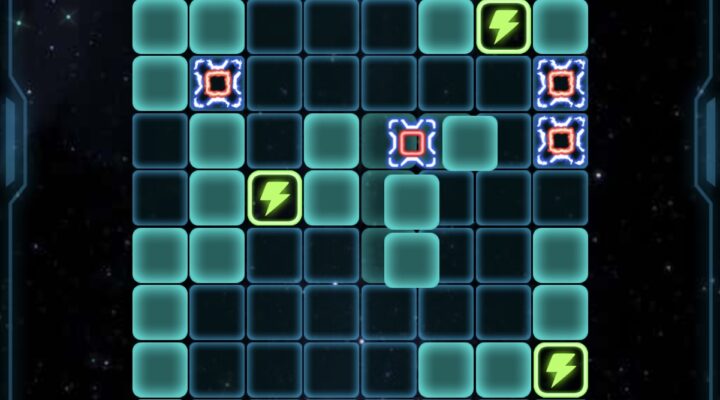 Astro Blast is a block-placing puzzle game with a twist. You’re not just trying to clear the grid, you’re trying to guide a spaceship through the cosmos, fighting off alien aggressors as you do. And it makes for a pretty darn interesting experience.

Each level you’ve got a grid, and a series of shapes you need to place – you get three of those at a time, and three more when you’ve used them. You’re trying to connect lines of blocks horizontally or vertically, but there’s more to it than that.

If you create a line of blocks that doesn’t have a bomb in it – a glowing square that some of the shapes carry inside them – then nothing will happen. If there is a bomb in there, it’ll explode, taking everything around it with it. When the bombs explode, you fly forwards, getting you closer to your goal and the end of the level.

You can chain together bombs by putting them in close proximity, and create bigger bombs by matching them together in squares. There are other special blocks as well – these boost your energy, which you need to use your special skills, or give you some extra coins.

Those coins can be spent on upgrading your ship between levels, making it stronger and faster. There are sections where enemies attack your grid, popping into empty spaces and dealing damage until you’ve blown enough bombs up around them to take them out. You’ve got a laser that can hurt them as well.

There are boss levels too, where you’re not worried about distance, but killing powerful assailants before they crippled your ship. There’s just enough tactical fun here to keep you interested, and coupled with the game’s unique ideas it makes for an entertaining experience.

Astro Blast wraps the usual puzzling shape into something with enough heft that you’re going to keep playing. It isn’t exactly revolutionary, but it’s smart enough to keep your fingers interested for longer than your average puzzle game.