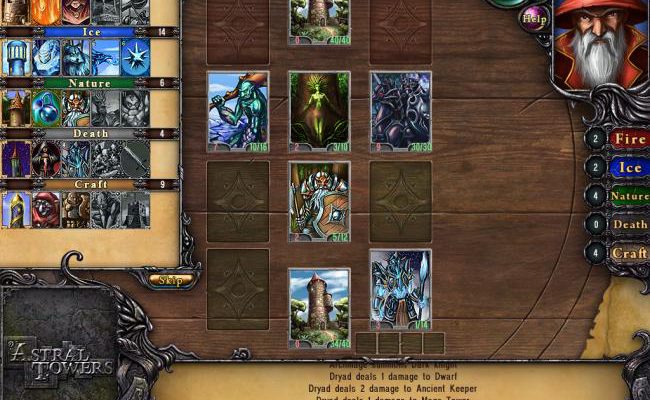 Shoot for the stars, land among the towers.

Board and card games developed specifically for computers have a mixed history. From the seemingly endless parade of Risk clones found on free gaming sites to imaginative and highly entertaining games like Everlands, they’ve checked every step on the quality scale. Big Fish Games has recently featured a new entry on the scene, the card game of wizardly duelling, Astral Towers. I got to take it for spin and find out what slot it inhabits.

Astral Towers brands itself as a card game, but this is a little misleading. The cards in the game represent spells but you don’t have a hand and there’s not even really a deck to shuffle. Instead you start with a selection of cards and power points spread across five schools. You can cast one spell each turn by paying its points cost from your power  reserve in the appropriate school. Your play area consists of six slots in two rows, with your avatar inhabiting the middle at the back. You can summon creatures and buildings into the rest, all of which have attack and life values. After your spell for the turn, all your creatures attack, removing their attack value from the defender’s life. Front row creatures have to be destroyed before you can attack back row ones, and on it goes until one player succumbs. 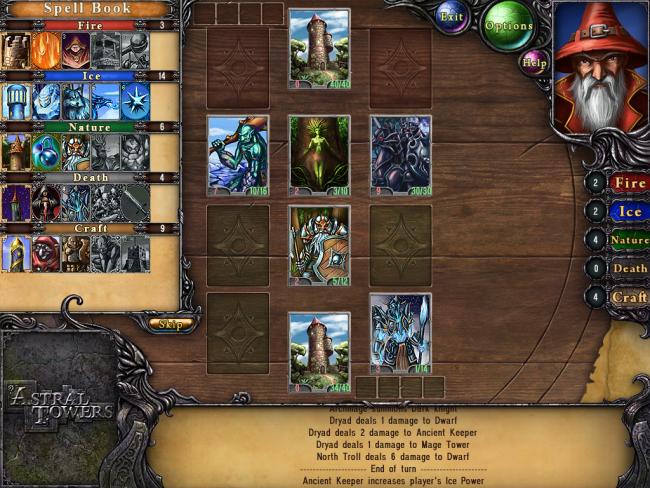 It’s really pretty easy to pick up: your first game includes tutorial steps and it’s mostly smooth sailing after that. But that simplicity is deceptive. On top of those bare mechanics the designers have built up a considerable variety of card effects and strategies you can follow, aided greatly by the positional play offered by the two rows of cards. It’s also almost entirely non-random except for your initial spell selection in two of the three game modes, which are play against varied AI levels or – if possible – another human. The third mode is a map-based game where you follow a very simplistic fantasy plot and pick up new spells and other power-ups as you battle sequences of increasingly powerful enemies.

This story mode could be seen as the centerpiece of the game. And it certainly has that ephemeral, addictive quality of collecting upgrades that keeps you wanting just one more battle before you turn off, however long you’ve been playing. Since your cards and your enemy are fixed, each battle becomes a bit like an engaging, absorbing puzzle where failure means you have to go back and plan out a different set of combinations to try and defeat the foe. Sadly, the AI in this mode seems stuck on a relatively weak level, the plot proves risible and overly linear, and the text butchered by grammatical errors. It’s good fun, but it could have been better with relatively little extra effort. 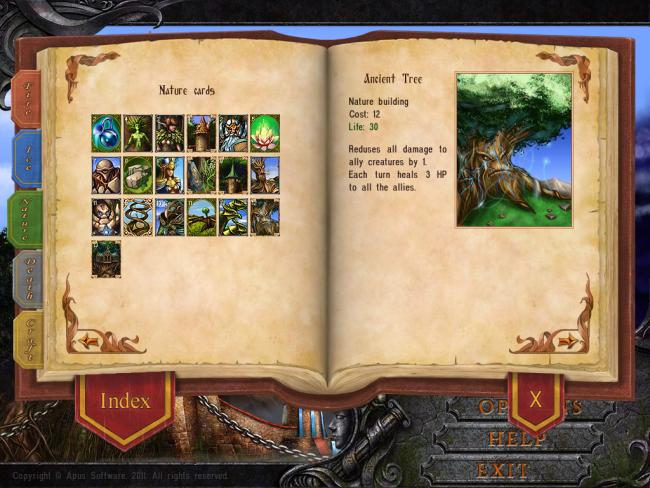 Following the story to its conclusion will take perhaps five hours, and at the end there’s little point in replaying it. But then there are the one-on-one games, which provide a pleasing alternative to fall back on and extend your play time. It’s here that you’ll discover the full tactical richness of the card effects in the game, as you can choose to specialise in a school or try and keep your options open while fending off your opponent. This isn’t hard on the first two AI levels but it suddenly becomes very challenging in the engrossing Archmage mode. The most satisfying way to play is to sit down at your computer with a friend and play a hotseat match. Which makes it rather a mystery as to why no network play mode was included. Again, a relatively simple addition would have added an enormous amount to the game.

As you might expect from a fairly static game, the graphics and sound are serviceable but unspectacular. The map in the story mode is very bland and while the card art is rather better, it still relies on very tired old fantasy tropes including, disappointingly, scantily-clad females. There’s no animation in the game beyond a basic “shot” icon that shows what’s attacking what. This is accompanied by a swoosh noise which, aside from the inoffensive background music, is all the audio available. A few additional battle noises, perhaps some war cries, the clash of swords and the twang of bows would have added a lot of atmosphere.

I’m probably sounding overly negative about Astral Towers. It’s a cleverly designed, interesting and – most importantly – largely very fun game. But that negativity stems from the sense that with only a few additional features in all the major verticals, it could have been outstanding. A little more work on the presentation, network play,  a map mode with more open movement, a choice of difficulty and – above all – a better story would have worked absolute wonders and made a great game. A magical one, even.