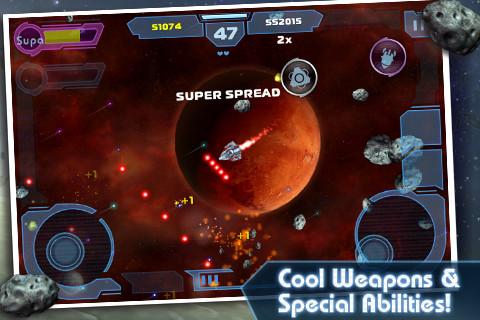 If someone were to make an infographic to explain this one, it would probably take the shape of a yin yang.

This is starting to make my brain hurt.

That being said, the game ultimately responsible for this chain of releases is the 1979 Atari classic Asteroids, so it’s only fitting that they’ve decided to mine their progeny when revisiting it.

Asteroids come in waves, and in between these waves you’ll be given the chance to visit a shop to purchase power-ups, health, and lives. Most of this can be purchased using the gold you’ve acquired through the course of the game, but a few primo items will require space bucks that will cost you real world money. All in all, though, the game is fairly gentle in this area.

The only time you’ll really feel obliged to spend real money is if you decide to open up the two additional galaxies for play, or want to play with the two additional ships – but honestly, there’s plenty of fun to be had here without ever spending a dime. In fact after unlocking the additional ships and galaxies, we didn’t really find them to be all that unique when compared to the free content. If anything, real money may be better spent on some of the elusive “Omega Tech” upgrades that go above and beyond the capabilities of the free currency modifications. 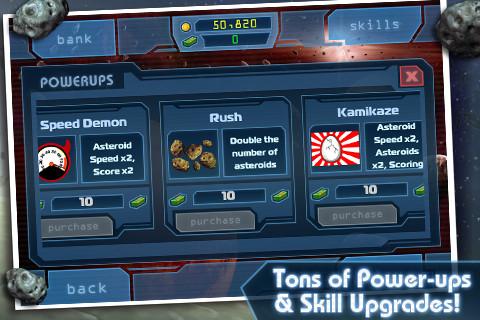 For all intents and purposes, Asteroids Gunner is an endurance test that feels strikingly like Space Miner Blast. If you love one, you’re going to love the other – and I’m speaking from experience here. At the same time though, it’s hard not to knock Asteroids Gunner for a certain lack of creativity. For all the fun the game offers, there isn’t really anything here that we haven’t seen before. We love that the range of power-ups and tweaks is greater than in Venan’s game, and that Gunner also supports the iPad – but without any significant changes to the existing formula, there’s still an echo of “been there, done that” for fans of the Space Miner Blast.

In terms of presentation, the music lacks a certain freneticism – something that we would have expected to match the Asteroid Gunner‘s frantic gameplay. And while the visuals are serviceable, they aren’t quite spellbinding. But as a total package, everything seems to come together as it should.

While it’s not the most original dog in the fight, Asteroid Gunner feels like an idea that’s long overdue. Atari has had a few great releases here and there over the last few years, but for the first time in a while, it feels like they’re finally getting serious about mobile. Whether or not they follow through on this potential with some other great re-imaginings of arcade classics is anybody’s guess – but we’re certainly keeping our fingers crossed.