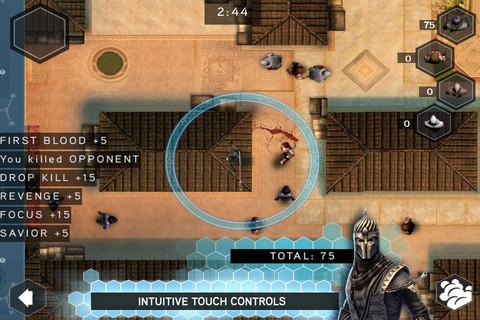 With the latest major instalment in the Assassin’s Creed series only weeks again, the marketing hype machine designed to put it back in the public eye is already in full swing. As part of their promotion, Ubisoft has released the freemium multiplayer experience Assassin’s Creed Rearmed to App Store – and much to our delight, it’s unlike anything else we’ve ever played on the iPhone.

If you’ve ever played an Assassin’s Creed game previously, you’ll no doubt remember that a large part of the game revolves around blending into the crowd and remaining undetected. Rearmed explores this concept a little further in a unique game of multiplayer cat and mouse.

Players will select from a collection of avatars that, from the top down, look much like the denizens of Renaissance era Europe. In fact when you walk around, you’ll look exactly like a dozen other characters that are controlled by the computer – but that’s the point. You’ll want to blend in and remain undetectable to your fellow players, because oncethey figure out who you are, you’ll end up on the wrong end of their blade.

Assassin’s Creed Rearmed is a game that’s all about acting as much like pre-programmed AI as possible while keeping an eye out for characters that deviate from the norm. If you see an individual that stops abruptly, scales a roof, or suddenly backtracks, there’s a pretty good chance that they’re your prey.

The game rewards you for stealthier kills, first kills, and the like, giving you points that will let you level up and unlock new weapons and items in the shop. In the shop you’ll find a pretty wide range of purchasable items, from weapons with increased damage and range to special items like smoke bombs and disguises to throw off your competitors, and even new personas to let you don new threads.

In terms of production value, what’s presented here may feel a little strange to fans of the series. Rather than a stunning and polished 3D environment, Rearmed offers a greatly dialed back, top down look, giving it the vibe of a budget indie game rather than a big studio production. That’s not necessarily a complaint mind you – and since the gameplay reminds us of that out of the box thinking you might find in the indie scene, we can’t help but feel it’s a perfect complement to the package. 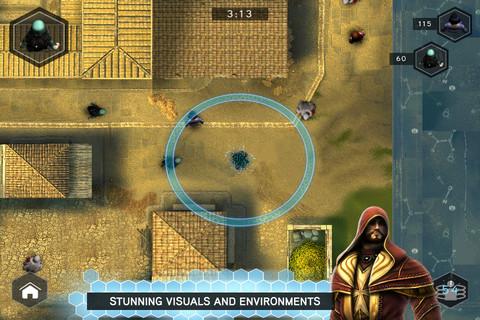 There are few, if any, complaints to be had about Assassin’s Creed Rearmed, though that doesn’t mean the game gets off scot free. Some of the controls, such as double-tapping to run, didn’t always work as reliably as we’d hope. But since such actions would easily give away your non-AI status, we can see why the developers may have wanted to make it hard to accidentally pull off. And with only four players allowed in a match, when one ot two players drop out, the experience tends to drop with them. Allowing for more players at any given time would help to alleviate this problem, though again, we can see why they wouldn’t want to go this route – the more real people running around, the easier they are to spot.

Asides from the occasional turn-based gem, great multiplayer mobile games are few and far between on the App Store. Assassin’s Creed Rearmed is easily one of the best we’ve seen. It’s totally unique, and a great mobile extension of an already stellar franchise. If you think you can spot the real player amongst a legion of AI lookalikes, now’s your chance to prove it.