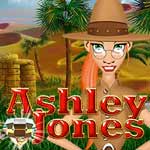 Just about every casual game developer has made a match-three offering by now, but that doesn’t stop the jewel swapping in Ashley Jones: The Heart of Egypt from being fun and addictive. On the contrary, the new title from Fenomen Games is one of the more compelling match-three releases in recent memory, due in no small part to its successful blend of elements from similar games.

You take the role of Ashley, a young archeology student who agrees to take over an excavation in Egypt for her professor. She’s heard rumors regarding the jewel of the Heart of Ra, although the storyline suggests Ashley is a little reluctant to undertake the journey. Likewise, I became adverse to playing The Heart of Egypt upon seeing the first level, in which you learn the basics of swapping gems and clearing the tiles beneath them. Been there, done that a thousand times, I thought.

But just as Ashley’s quest takes her deeper into the core of an ancient mystery, so the gameplay in The Heart of Egypt pulled me in as it introduced each component. Like other match-three games, you’ll encounter locked jewels that must be included in multiple matches before the chains are released and stone blocks that disappear when you make a match next to them. Also, buried under one gem on each level is a piece of an artifact Ashley must find. Once you include the jewel in a match, the artifact is revealed. In addition to clearing all of the tiles underneath the gems, you must drop the artifact off the bottom of the game board. Your efforts are timed, so you can’t let the desert heat slow down your dig.

If you’ve ever played a match-three offering in which you have to drop an object off the bottom of the game board, you know how frustrating it can be when you get an item a couple of rows from the end and are unable to position any potential matches underneath it. The Heart of Egypt solves this problem by allowing you to earn power-ups that have various effects. For example, if you match 100 red gems, you get a shovel that allows you to dig up the contents of any square on the game board. Collecting 130 purple jewels gives you the right to rotate the game board with a click of your mouse, thereby moving the artifact closer to the bottom of the screen. Other power-ups allow you to blow up portions of the game board, stop time and more. Power-ups are stored on the right side of your display. To use one, you just click on the item you want to use and drag it onto the game board.

Numerous match-three games have been built on one of these features. For example, Jurassic Realm from Enkord introduced the idea of making matches next to stone blocks to eliminate them, while Magic Tale from Alawar Entertainment established the rotating game board mechanic. The blending of these familiar elements in The Heart of Egypt, however, feels fresh because it allows you to use new strategies as you plan several moves in advance.

The Heart of Egypt also includes smooth controls. Whereas some match-three games require you to wait until all of the matches have been made before swapping additional gems, Fenomen allows you to continue swapping jewels as you rack up combos. This can enable you to point and swap your way through some stages, provided you’re fast enough. In general, though, some thought is required, as the level design tends to be challenging.

Aesthetically, The Heart of Egypt scores well. While not the most graphically advanced offering on the market, its animated backgrounds look fantastic and its heads-up display is clean and easy to use. Likewise, the sound effects and music complement the gameplay without grating on your nerves.

My disappointments with The Heart of Egypt are minor. For example, the game features an interactive museum in which you can display the artifacts Ashley gathers in any manner you wish, but the room is so small, things grow crowded fast. Why not allow the player to scroll off the edges of the screen to utilize a larger area? Also, on one occasion, I’d cleared all the tiles but hadn’t found the hidden artifact, so I was stuck with making random matches until I uncovered the object, which happened with very little time remaining. To avoid this problem, Fenomen could offer a hint as to the location of the artifact as the clock winds down.

A good test for whether or not I give thumbs up to a game is if I’ll keep it around after my review is done. I assure you, The Heart of Egypt will remain on my hard drive until I help Ashley complete her journey. We’re about 40 levels in, and although we’ve got a long way to go, I’m looking forward to each step of the journey.