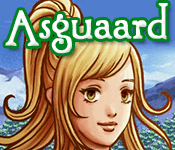 Asguaard is a throwback to the 16-bit days of console gaming, evoking classics like Final Fantasy VI and Chrono Trigger with its sprite-based graphics and turn-based RPG battles. As a game for fans, Asguaard offers players an intriguingly self-aware plot that takes place in a memorable world that’s stuffed full of secrets to uncover. A terrible winter creeps over the world of Asguaard after some unknown power opened the Pandora Box, threatening the dwarves and fairies with annihilation if the legendary humans they’ve summoned from another world cannot save them.

The legendary humans are of course meant to be from our world. Glen and Rayanne babble about movies and their life plans at first, but quickly become absorbed in their adventure through Asguaard. They’re accompanied by a stoic dwarf named Grom who believes he has no soul (that’s for humans) and a fourth party member who is much too surprising to spoil in review text. If you’ve ever played a 16-bit RPG before you’ll be right at home with the random encounters, talking to people in towns, and leveling up through fights.

In Asguaard you have the interesting option to play the game in Easy, Normal, Hard, or Story difficulty. Story difficulty is for plot-only RPG fans, offering tons of money and stupendously easy battle sequences. The other difficulties behave essentially as you’d expect. In addition to picking difficulty, you can pick how often you’d like to fight random encounters. The options fall in a range between “every 8 steps” to “every 40 steps.” Unfortunately, picking anything but the highest encounter rates ends up just forcing you to grind on non-Story difficulties.

Perhaps Story difficulty being available was why so little effort was put into Asguaard’s combat system. It’s by far the worst part of the game, brutally imbalanced and a bit buggy. The combat system is essentially a Dragon Quest clone with very few new or interesting ideas added to the basics of matching damage types to monster weaknesses. The monsters are presented in uninspired lineart that lacks the charm of the 2D sprites used elsewhere in the game. Most enemies are dull pushovers, while a select few have frustrating abilities that can wipe out your party on the first turn (or before you get to do anything).

The Skill system in theory lets you customize and improve your party, but in practice you can buy virtually everything for everyone. You have no way of knowing what Skills might do before you buy them, either, so chances are you’ll just buy everything. Too bad your Skills work against you in some situations! For instance, Glen has Counterattack innately. If Glen gets attacked by a particular boss who also has Counterattack, the result will be an unbreakable sequence of the two characters Counterattacking each other until Glen probably dies, since the boss will have roughly 10 times more HP than he does. This problem would be so easy to fix that there’s just no excuse for it.

Asguaard‘s plot is surprisingly interesting, given the game’s barebones presentation. It almost savages the poorer aspects of the gameplay. There are a lot of good twists and turns that are genuinely unexpected, like a wonderful sequence where Glen ends up on trial for murder and you have to clear a few dungeons without him to prove his innocence. Unfortunately, Asguaard‘s script is possibly the most poorly-localized I have ever seen in my entire career as a game critic. It’s full of confusing grammar, spelling, and usage errors that render large chunks of the game’s dialog nearly impossible to read. Asguaard comes off like an epic novel written by an absent-minded twelve-year-old, complete with the game’s title being misspelled frequently as “Asgaard.”

Asguaard feels like a game meant as a love letter to the nostalgia that many gamers rightfully feel for the 16-bit era of RPG console games, but it’s very hard to appreciate. The combat just isn’t fun at all. If you avoid fights by dropping to a very low difficulty level, you’ve still got to wade through a script that’s written like a really poor forum post. Unless you’re a truly diehard and patient fan of this style of RPG, Asguaard is just too drastically flawed to be worth your time.