Ascension: Chronicle of the Godslayer Review 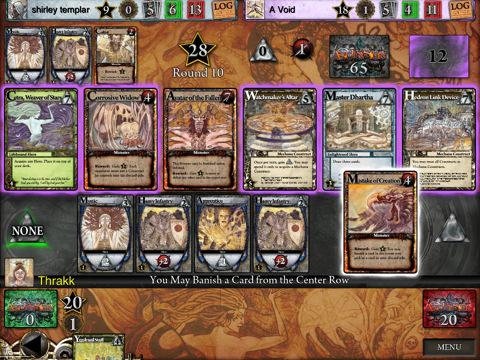 Ascension: Chronicle of the Godslayer is a flawless digital recreation of the popular deck building card game

I know I’ve said this a few times already, but I’m absolutely in love with the fact that a lot of my favorite board and card games are making their way to touch screen devices. What makes me even happier is that, as time goes by, the conversions are just getting better and better. Enter Ascension: Chronicle of the Godslayer, which is a deck building game that I have zero bad things to say about. So what’s a deck building game exactly? Well, I’m so glad you asked!

Deck building games have been a somewhat new innovation in the world of board games. Sure there have been collectible card games like Magic: The Gathering for years now, where you buy random packs of cards, build a deck, and then compete with against other players with it. Those types of games require a constant stream of new cards and random packs to buy, so it goes without saying that the expense never ends.

In a deck building game, all the players start with identical weak decks, then use the cards in that deck to “buy” more cards that are on the table and add them to their deck. Once you acquire them, they go into your discard pile, and once your draw pile is exhausted those cards are shuffled in. These cards are then used to buy even more cards, and beat your opponents’ decks.

The nice thing about this setup is you can buy the game once, and then play over and over, constructing and using a different deck in each game.

In Ascension: Chronicle of the Godslayer, each person starts with a 10 card deck with weak buying power and even weaker military might. Each player draws 5 cards from their deck and the game begins. In the center of the game area are 6 random cards available for you to interact with, typically by either buying them and adding them to your deck or, if they’re monster cards, defeating them and gaining victory points. When one of the cards is bought, beat or banished, a new random card takes its place.

Some cards are heroes that are added to your deck and are played and discarded and shuffled back into your deck over and over. Others are known as constructs and, once you play them, they stay in play for the entire game. These cards give you abilities like extra military strength, more runes to buy more cards with ,or things like drawing extra cards. In addition to the constantly rotating center row there are 3 decks of cards that are always available. A mystic that offers slightly higher buying power, heavy armor for upgraded military strength or you could kill the crappy cultist monster.

The digital implementation of the real world card game is really pretty top notch. The layout on screen is clear, which to be honest I was a little surprised by since there’s a lot of information that needs to be conveyed. It will certainly be confusing at first when you start playing, but the tutorial is solid and very well put together and after seeing the game in action for a few turns it all makes sense. 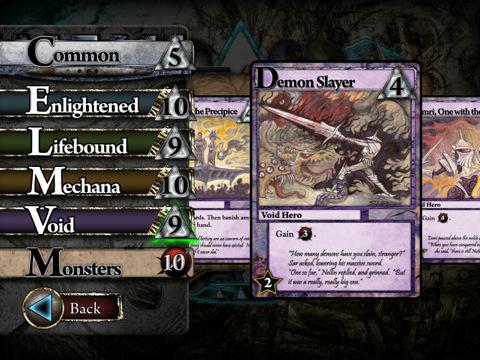 One of the things I really liked about Ascension is the hand drawn look to the artwork on all the cards, and how the different in game factions have their own style. There’s no mistaking a Void card for a Lifebloom one, but look great side by side on the table. I was happy to see all this great art carried over and appear in the game.

The thing I love most about all of these board and card games turned iOS apps is still true here – I just love the fact that I always have someone to play against, and having the scoring taken care of just lets you concentrate on playing and getting better. In addition to the offline AI you can also take your game online to play against 1-3 real world opponents.

With the constantly rotating and random list of card to buy, Ascension: Chronicle of the Godslayer is a game that plays very differently each time you boot it up. Sometimes the deck looks monster heavy, so military cards are a good choice. Other times buying lots of draw cards so you can churn through the deck over and over is the right way to go. Suffice to say trying to play each game with the same strategy is a surefire way to lose. But with a game this good, the only real loss is if you don’t check it out.