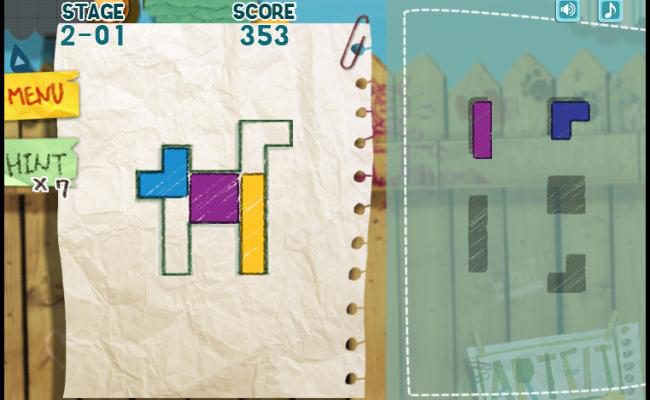 Social developer Pangalore has released an interesting new game on Facebook by the name of ArtFit. A puzzle game, it steers away from the more common trends of cards, mahjong, or match-3 Bejeweled clones and focuses on more unique mechanics. It’s highly simplistic, yet the game is surprisingly enjoyable to play. Though it does tend to be a little bit too easy for a good while and is one of the many games that will have you reaching for the mute button.

More often than not, it is the simpler games that provide the most enjoyment, and ArtFit demonstrates this concept quite nicely. Presented in a sort of arts-and-crafts style, you are given a “hand-drawn” outline and a number of multi-colored shapes. The general idea of the game is to fit all of these pieces given into the shape outline provided. 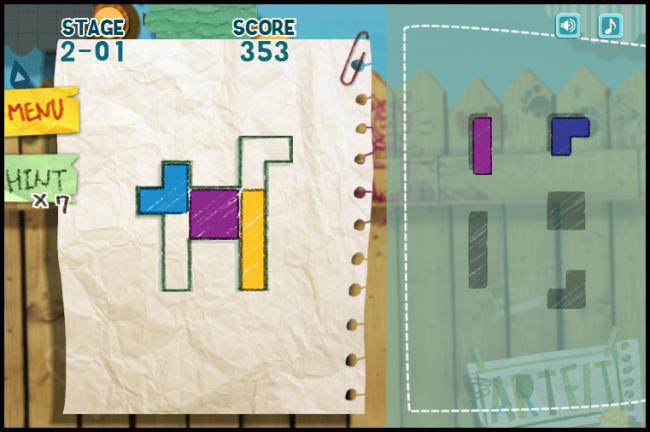 It sounds simple enough, but as the levels progress, the outlines become more and more intricate (e.g. they start as bland, geometric spaces but evolve into complex shapes such as animals). Moreover, the different shapes that need to be placed in the outlines become more complex as well, with more and more appearing in subsequent levels. The big catch is that all of the shapes must be used to successfully solve the puzzle, and they cannot be changed or rotated in anyway.

ArtFit starts off easy enough, with most puzzles being resolved in a matter of seconds. It does become more difficult later on (there are 16 stages, each with several puzzles within them). Nevertheless, for experienced puzzle game players, ArtFit will provide little difficulty early on. Even so, the use of pattern recognition as a puzzle mechanic is quite a refreshing change of the constant barrage of Bejeweled-style applications, and does become much, much harder.

One of the aspects that makes the game a little easier is that you are capable of employing hints that will display where a certain shape is supposed to be placed. These play into the game’s monetization and social mechanics, as they are limited in supply and are primarily earned through purchasing more in-app or being gifted from friends.

As a more minor addition, ArtFit also incorporates a marginal leaderboard mechanic amongst friends that play. As you play, you score points for each move made in a specific puzzle, and lose points whenever a piece has to be removed. That in mind, removing pieces subtracts more points than earning them, so planning is important. As you progress through the game, a total lifetime score is recorded as well. 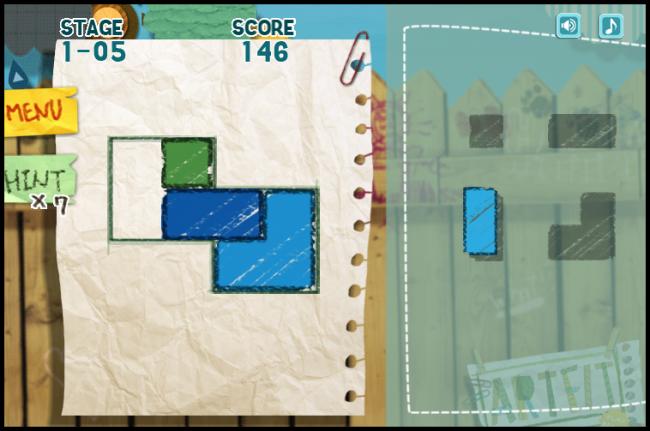 As enjoyable as the latter aspects of the game can be, it isn’t without its faults. Most noticeably, the app feels like it runs extremely sluggishly. There is always a second or two delay with virtually everything. It doesn’t seem like much, but it becomes obnoxious rather quickly. The sound design for ArtFit also leaves something to be desired. And then some. Namely, the problem lies in the repetitive music. It sounds tolerable at the start, but is constantly repeated with every level and becomes old very quickly.

Generally speaking, however, Pangalore’s ArtFit is a fairly decent puzzle game. Rather than create a title that is filled with clichés or commonly cloned game mechanics, it seats itself in something a little bit fresher. It takes a little bit to truly become challenging, but once there, the pattern-recognition puzzles can be a great deal of fun to solve.