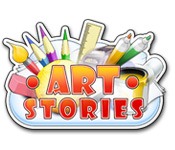 Art Stories is a lengthy but unpolished take on match-3.

Most of the time Art Stories is a pretty standard match-three puzzle game in the vein Jewel Quest. Players have to clear colored orbs from grids of varying shapes and sizes by swapping pairs to make horizontal or vertical rows of three or more like-colored spheres. It’s entertaining enough, but it’s also very been-there-done-that. However, it still manages to stand out from the crowd by virtue of its frequent “art” levels, which add a unique secondary challenge that, though executed a bit sloppily, ends up being both fresh and fun.

But let’s talk about the matching first.

In the standard levels, many of the tiles within the grid are locked by “plates” that require a series of as many as five matches to break. You can do this simply by making one match of three after another, but this takes a long time and you probably won’t end up meeting the minimum point requirement to clear the stage and move on to the next one.

A better idea is to look for matches of four or more. These create power-up orbs which, when matched one more time, become active, allowing the player to click on them at will to unleash powerful attacks on the grid. Examples include a waterfall that clears a few vertical rows, a paint can that eliminates all orbs of a given color, and a series of electrical impulses that eliminate multiple orbs at random. They not only help you clear stages more quickly, but also result in huge point bonuses—especially if you save up a few and click them one after another, causing action packed chain reactions.

If there was any doubt, this is not a the sort of matching game filled with long, eye-straining searches for the next available move, but rather one in which players are constantly clicking and making huge cascades that are nigh impossible to keep track of.

These highly original stages confine the matching grid to a simple rectangle on the top half of the screen. The bottom half is reserved for scenes that look as though they’re composed of simple but beautifully rendered cardboard cutouts. One level might depict soldiers storming a castle while another may be much quieter, featuring little else but a dining room with an empty table.

Each scene has its own story and objectives necessary to clear it. The dining room, for example, comes with instructions telling us that the table must be properly set. To do this, we must make matches in the grid above as rapidly as possible to unlock items that can be dropped into the scene—in this case glasses, water, plates, fish, flower pots, candles, and fire to light the candles. Once unlocked, the items move back and forth in a horizontal bar above the scene, and we have to judge when to click on them to make them fall to the right location. It’s a lovely little side game that keeps us on our toes, our attention divided between matching and scene setting.

Plus, each scene has bonus achievements, such as dropping wood in a fireplace and lighting it or dropping water into a plant pot to make the vegetation grow. It encourages experimentation, and often results in a sense of satisfaction and the occasional chuckle—as happened to me when I saw dog wander into a scene to pee in a plant pot I’d just placed.

However, compelling as they are, the art levels could have done with a bit more polish.

The writing, though sometimes witty, is chock full of grammatical mistakes—most notably a discomfiting lack of definite and indefinite articles and only occasional adherence to the proper use of plurals.

What’s more, these little stories don’t always make clear the nature of our objectives. Consequently, the task of filling the stage completion meter is sometimes reduced to trial and error as players simply experiment with the items they unlock until something works. Ditto for the achievement objectives, which are only hinted at via pictograms that too often clumsily illustrate what must be done.

On the bright side, while it may take a while to figure out the art to the art levels, you’ll likely learn how to decipher them more quickly as the game progresses. And with a good seven or eight hours of play—much longer if you want to earn all of the achievement trophies and obtain gold monkey ranking on each stage—you’ll likely hit your stride with plenty of time left in the game.

Art Stories won’t be the next Bejeweled. It’s matching is too derivate and its art levels are too rough hewn. However, it should prove a pleasant and relatively lengthy distraction for puzzle fans looking for a familiar matching game with hints of originality.