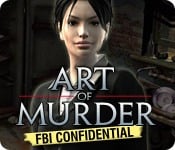 Art of Murder from City Interactive is a point-and-click adventure with a Law & Order feel. Set in 2007, you follow Nicole Bonnet, a rookie FBI agent on the trail of a serial killer. A strong plot and sophisticated graphics are a plus, but some boring puzzles and illogical gameplay can be jarring. Add a violent storyline and a sprinkling of four-letter words, and you have a game that will please some and repel others.

Art of Murder would make a good R rated police drama. It begins with the death of a senior FBI agent, leaving his rookie partner determined to track down the murderer. The case soon overlaps with that of a serial killer who is dispatching wealthy New Yorkers using an ancient ritual weapon. Psychosis? Or coverup for a different motive? It’s up to Nicole and her new partner to solve the crime.

Many point and click adventures offer largely unrestricted movement. Those who don’t like the dominant series in this genre, the Nancy Drew mysteries, often complain that they can never figure out what they’re supposed to do next. Others, however, enjoy the immersive experience of a nonlinear game.

Art of Murder starts out as a guided adventure. Initial gameplay severely limits what you can do. Head into a room where there’s nothing useful and you’ll hear “There’s no time for sightseeing!” The car has a map of the city—but you can only go to a single preset destination. There’s no backtracking until the plot demands it.  Gamers used to open environments may find this frustrating.

Gameplay can be clunky. If you’re supposed to combine object A and object B, the game may only accept the combination if you pick up B first. Some objects can be combined in inventory—others must be set in place first. A lot of this is just trial and error.

There’s also no general hint system. A button in the lower right illuminates hot spots in the current scene, like exits or zoom locations. But to understand the mystery you need to follow the dialogue, including Nicole’s comments to herself. You also need to read the bar cues at the top just to tell where your cursor is pointing.

By far the biggest weakness of the game is the puzzles in the first half. Too many are pure trial and error. Even more jarring, the game requires you pick up objects long before you have a need for them. Most adventures present a problem and then have you search for objects to MacGyver your way to a solution. But when Nicole is visiting a museum to examine ancient weapons she picks up a fire extinguisher “just because it might come in handy.” By the time she comes to the puzzle, she already has everything she needs.

Some items also disappear from inventory automatically. This completely removes the illusion that you are a detective solving the case.  However, several of the later puzzles are quite clever, and fit the genre. It’s as if they threw in the boring ones just to lengthen the game.

There is one timed puzzle which is purely trial and error, very long, and pretty much guarantees Nicole will die a violent death at least once before you finish the game. An autosave lets you try again, but it can be unsettling.

On the plus side, music is well done and adds to the mood. The contrast between New York’s urban grittiness and the bright Peruvian scenes is visually extreme, but appropriate to the story.   Voice acting is excellent, and the dialogue is well written. Translation is generally good, with only a few missteps like “closet” for “cabinet.” Length is very good, with about 15 locations and over 2 dozen chapters.  Because this is a very large game, no demo is available at most sites.

The mystery itself is interesting, with several twists. There are a few dangling plotlines which somewhat spoil the satisfaction of the ending.

This isn’t an adventure that will grab you all the way through, and it’s not a world where you’ll be free to do a lot of exploring. You’ll work one building at a time, 3 or 4 rooms, gather your clues, and move on. But in that sense it probably fairly depicts the life of a rookie investigator, and the publishers are to be commended for creating a fully adult mystery with dialogue that could stand up to a lot of movies.

If you like the Law and Order adventures and don’t mind the language, Art of Murder: FBI Confidential should be a satisfying point and click mystery.  However, if you judge games in this genre mostly on the quality of the puzzles, you should give this one a miss.