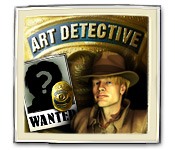 Not all detective work involves homicides. Art Detective is a spot-the-difference game that has you examining classic and lesser known paintings for subtle changes. It has a few creative mini-games, but a lot gets lost in translation.

If the title hasn’t given it away, the premise is simple. John W. Cromwell is an art expert and law enforcement agent who finds himself searching for the mastermind behind a series of art thefts. The crooks break into museums, churches, and private collections, and swap priceless paintings with cheap counterfeits. It can take months for the discovery of fraud, and then John is called in to determine the authentic painting from the impostor. Working in conjunctions with Jack Stinger from the FBI, and a museum and art expert named Alfred, John searches the globe for potentially fake paintings in the hopes of catching the crooks.

There’s a really interesting main menu, where different items in the room take you to different menu options. The first thing you need to do is check your email. Every time you get an email, a voice says, "You-got-a-email," although it’s heavily accented and it took me a bit to figure out what she was saying. This can happen in the middle of game play, which is a bit distracting. But anyhow, you need to check your email in order to get to different locations.

The bulk of the actually gameplay involves spot the difference tasks. You’re shown two images, on the right and left of your screen, and must click on items which are different. You get unlimited hints, but the meter refills painfully slowly. If you make too many wrong clicks, you have to start from the beginning. There isn’t any warning about that, either, which irriatated me the first time I discovered it. The images do change slightly if you replay, so thankfully it’s not too repetitive. The differences are extremely subtle, at least in advanced mode. They might be the number of leaves on a tree, or the tint of a cloud in the sky. Since the game play appears to be untimed, you can play as slowly as you need.

In addition to fighting crime and evaluating art, John also restores damaged paintings. If one has some damage, they send it to him for clean up.  This is done by selecting the proper chemicals for the job (with no instructions, I might add). There are 10 chemicals, represented by different colors. You must take a chemical, and drop it in the container in order for it to show up on the paper. If you use the correct chemical in the correct spot, it will be marked with a check. An incorrect chemical will display a red X. A correct chemical in the wrong spot will be marked with a question mark. You have just 8 chances to succeed, so you have to be logical in your selections. This is another game that you may replay in the main screen.

To assist you during the main game, there are power ups, but they aren’t explained, so you basically learn as you play. They include things like a magnifying glass, and a double cursor. You can buy these in the e-shop at any time, provided you have enough gold. You can earn gold playing the minigames.

Now, about the mini-games. In the scrolls on your desk, you’ll find three minigames to start. For all, you have one minute on the clock. For the first, you’re shown a bunch of cards with faces from famous paintings on them, and you must select the one without a match. Try to get as many correct as you can before running out of time. Wrong clicks result in a time penalty.  The second is similar, but you must find matching pairs.  The third is a memory matching game, where you try to make as many matches as possible, memory game style.

You can replay paintings that you’ve already beaten in the main screen (under Art Gallery). There’s a jigsaw puzzle minigame listed under "photos" in the main screen. Under "puzzle," you can select a picture, but adjust the number of tiles (from 3×3 to 8×8) and replay the cleaning minigame again. This will also earn you dollars.

As for production values, the paintings used in the game are very pleasant, with many I haven’t seen before. The music is okay, but a bit intense considering that the game itself isn’t overly dark. It also repeats endlessly.

There is a mysterious sparkly thing on all of the game screens, but you can’t click on it. Sometimes it gets in the way of seeing the image. I think it’s a graphical bug. Also, clicks aren’t always responsive, so sometimes you need to click twice.  These things hamper game play.

Aside from that, there aren’t any clear directions as you play. There are some English errors (ex. "You need 5 evidences"). Still more of the language is grammatically correct, but worded awkwardly, so it’s hard to understand. Some is downright confusing, like, "With every part of discovered fingerprint you’ll get closer to dark hand." I was never really sure what I was doing.

Art Detective has some interesting mini-games, and a very cool menu screen, but the game itself lacks instructions and is difficult to play. The concept is good, and has been done successfully before, but the execution in this case is very rough around the edges.