Home / Reviews / Around the World in 80 Days Review

Around the World in 80 Days Review 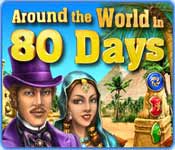 Jules Verne’s classic novel Around the World in 80 Days opens with buddies at the Reform Club arguing the possibility of traveling the world in 80 days due to a new railway in India. Wealthy bachelor Phileas Fogg decides to put his money where his mouth is and bet £20,000 – over two million dollars in today’s money – that he can travel the world in 80 days. With the exception of Fogg’s American visit, the match-three game Around the World in 80 Days from Playrix Entertainment faithfully follows the book’s storyline complete with the characters and locales.

Character dialog between levels tells of Fogg’s adventures with his servant, Passepartout. Fogg expands on the story through his journal writings. Using two approaches to tell the story nicely balances the game in contrast to some games that overdo storytelling with long text. Those who don’t want to waste time with the story can click "skip" to quickly bypass it.

Like the book, the game gives an overview of the story beginning in London. Fogg and Passepartout spend a set number of days in each of seven countries on four continents. They seek treasures and help each other out of sticky situations. Both end up in jail at some point while the other works on the rescue.

A round of match three play equals one day of travel. Like most match three games, Around the World in 80 Days comes with power-ups, barriers, and boards with thin spaces to make it tough to move around.

One-power up becomes available as soon as players make enough matches of four or more tiles. Keep making four-plus tile matches and the power-up upgrades to a more powerful one. The first is a hammer, which can knock out one tile, remove one lock, or melt one freeze. The super hammer can destroy all the tiles of a selected color. Upgrade all the way to a super bomb.

The power up works great since players control what they want to use. After completing the level, the power-up empties. You must match your way to build it back up. Some advanced levels require a specific power up to survive the level. The darn game stole over five lives before I discovered the secret to conquering certain levels.

On the last day of visiting a country, the game objective changes. In this game, Fogg needs a rare stamp as evidence for his buddies to prove he did indeed travel through the country. Most levels require freeing parts of a treasured item related to the country at the bottom of the grid. For a delightful change of pace, the object for the stamp level is to clear all the tiles.

The design of the tiles, treasures, and the backdrop represent Fogg’s current location. You can pause the game anytime to revel in the beauty of the scene, and can earn seven beautiful animated screensavers – one from each country – that work in real time. The scene changes from day to night and back. It even rains on occasion. During the game, when the scenery grows darker, time is running out.

Advanced levels call for moving pieces left or right or else they can’t exit the board. A brick wall shows at the bottom, providing no way out – not even with a super bomb. This task increases the challenge and calls for strategic thinking, but it also frustrates the most. Tips appear throughout the game, but nothing about how to get out of a situation like this one. Oh, it’s big time hard in level 81 with all the pieces needing to move in one direction or the other.

As for the disappointment with the U.S. visit, all the treasures relate to pirates. Nowhere does the book reference pirates. The scene takes place in San Francisco in the year 1872, which is not exactly pirate country. Here, Fogg also interacts with a pirate – straying from the story. Although it’s OK to veer off a little for creativity, but the game could do better than to rely on a pirate theme.

The options screen comes with a checkbox for receiving tips. These tips explain how to play the game and its features. Every time the stamp game comes on, so do the tips. It’s understandable to explain the stamp game once or twice since it comes just before departing for another country, but every time is too much, and players may not want to turn off tips.

While the music leans towards classical rather than rock, the temptation to turn it off never comes. The sound effects provide the faster and harder sounds to provide balance to the audio. Some of the sound effects resemble the action in Peggle.

Those who’ve played Playrix’s Rise of Atlantis will recognize similarities between the two games, although Playrix has improved Around the World in 80 Days. It’s easier to read the story’s text, and locked tiles are easier to distinguish. Putting together an artifact happens over multiple levels in Atlantis, whereas every level in this one creates a complete artifact, which much more satisfying. Also, combos don’t count for much in Atlantis, but they have more value in Around the World in 80 Days. (That said, they still could stand to add more power to the power-up.)