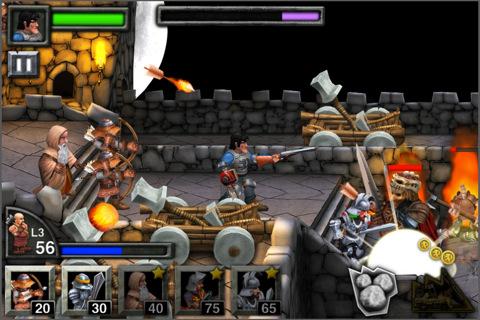 Army of Darkness Defense will hold some appeal for fans of the series, but offers ho-hum castle defense for the rest

When it comes to ridiculous, over-the-top horror action, few movie franchises are as well-known as Evil Dead. Over the years, Ash Williams has battled all sorts of monsters, including the Marvel Zombies, Freddy Krueger, and Jason Voorhees. In the franchise’s first game on the App Store, Army of Darkness: Defense, players get taken back to the good ol’ days of Ash versus the Deadites. Unfortunately, the title seems to be banking more on the series’ nerd appeal than actual quality.

The game’s story recounts the plot of the series third film, Army of Darkness, and then puts players in the middle of the film’s climactic battle. Players control Ash as he defends the Necronomicon from the invading Deadite forces.

The game is your standard side-scrolling castle defense title; instead of differentiating itself with new gameplay mechanics, though, the game is banking on goofy fan appeal for success. Touching the sides of the screen will move Ash right and left; when he gets close to an enemy, he has a few automatic attacks that will slow the Deadite forces down until enough iron bars have been accumulated for players to send out human soldiers of their own.

Building up a human army doesn’t exactly require much strategy, especially once the units start getting upgraded. More powerful troops are eventually tough enough to take on just about anything that the game can throw at them. It’s a shame, really, simply because there just doesn’t feel like there’s all that much of a strategic challenge to the gameplay.

In between levels, gold coins are used to purchase upgrades for Ash, troops, and castle defenses. Players earn these coins after completing each level, as well as picking them up from fallen enemies. However the upgrades quickly get pretty pricey. As a result, players have the option of purchasing in-game gold with real-world money, similar to the system in Infinity Blade.

Basically, the game is one of waves and counter-waves; the start of each level shows players what enemies will be coming for them, and then players can pick what units and special attacks they want to use during that particular level. As the enemies grow more numerous and powerful, players will want to buy extra defenses for the castle, like archers and catapults that are mounted on the wall. 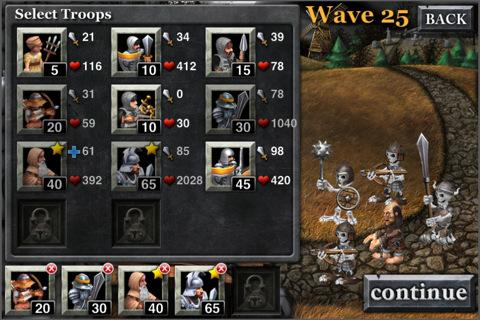 Visually, the game starts off great, but doesn’t go anywhere after that. It’s got some nice-looking characters and environments, particularly when it comes to Ash and the human forces, but players only have the same castle courtyard to battle through and the enemies show little actual variation in design.

Sound-wise, things are also a little mixed. At first, Ash’s one-liners are fun to listen to, but there aren’t a lot of them and they get repeated pretty often. It’s moderately entertaining for a little while, but that appeal doesn’t last long.

That’s the main problem with Army of Darkness: Defense. It’s got a certain limited appeal for fans of the franchise, but it isn’t really good enough to be considered a lot of fun on its own merits. Players could certainly do worse than this, but they could also do a lot better.