Over the last year or so, we’ve seen plenty of genres that aren’t traditionally social make the jump to Facebook with pretty great results. Hidden object games are a good example of this. So are role-playing games. And now, thanks to Playdom’s Armies of Magic, we can add side-scrolling defense to that list.

Taking its inspiration from mobile games like Trenches, Samurais vs Zombies, and everything in between, Armies of Magic puts players in control of a fantasy army that will march across the screen and do battle with any and every enemy they come across. Like the aforementioned mobile games, the basic strategy lies in knowing which troops to unleash at which times. Since you won’t need to do any of the fighting directly – your troops will move and fight automatically – it becomes a game of timing, as well as knowing the strengths and weaknesses of your different troops.

Thanks to a smart energy system, you won’t simply be able to flood your screen with troops and dominate your AI opponent in every match. Players will need to pay a certain amount of energy crystals to release new fighters into the fray, and these crystals need to be mined in the middle of combat by a specialized troop type – the miner. You can have multiple miners working at once to speed up your crystal production, but the more you have, the closer they’ll get to the enemy – and as you might expect, a slaughtered miner doesn’t get much done.

The mechanics mentioned above will likely feel familiar to any veteran of side-scrolling defense games, but they’re pulled off well and with plenty of style. Little touches, like the ability to speed up time, three distinctly different races to choose from (elf, dwarf, or human) and a lengthy campaign mode would be enough to call Armies of Magic a success all on its own – but this is only half the game.

The other half plants its roots in a fairly customary Facebook trope – city building. But instead of sprucing up a village to make it prettier or setting up a few shops to make it wealthier, everything you’ll be doing here is to better prepare you for war. 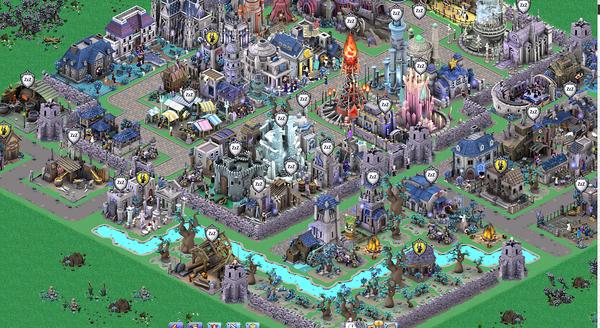 Your city is where you’ll be able to create buildings that can train new troops – and since troops that die in battle stay dead, training new troops becomes one of the most crucial elements in the game. But getting new troops isn’t as easy as just placing an order with the coins you’ve earned in battle. You’ll need people to train, and those people come from houses. But the more houses you build, the lower your culture rating drops – and if it hits zero or lower troop production will grind to a halt. Likewise, once you reach level 8 an asynchronous multiplayer mode in which other players can raid your city begins – so you’ll want to build defenses (and even station some of your troops) to try and fight off the impending horde. It’s a delicate balance, but it’s fairly easy to achieve.

In terms of presentation, Armies of Magic is easily one of the prettier Facebook titles we’ve come across lately. Battles are presented in a colorful 2D style reminiscent of cel-shading, and the music and sound effects are designed to keep players on the edge of their seat. By contrast, city-building elements are presented in a style that feels almost like a world made out of clay. As far as style goes, Armies of Magic really hits one out of the park. 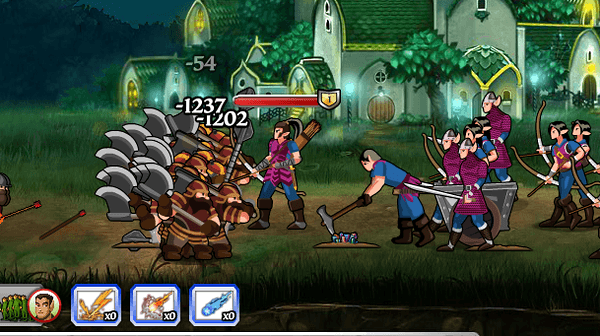 In fact, the only real complaint to be had about Armies of Magic isn’t in what it has, but in what it hasn’t. A game like this seems to be begging for real-time multiplayer, but Playdom hasn’t included it at launch. That said, a coming soon page is promising to let players “join or create real-time, synchronous battles against friends or foes” in a Live Battle Arena, so it looks like our one gripe will be addressed soon, and it’s hard to dock a game marks for an absence that’s about to be filled.

In taking a popular mobile formula and re-inventing it for Facebook, Playdom has created a unique game that’s as addictive as it is polished. And with other players to raid, a campaign to work through, and a challenge mode that we haven’t even touched on in this review, Armies of Magic should keep players busy for quite some time. Whether you’re a fan of the mobile genre or a first defender, Armies of Magic is one you don’t want to miss.